On The Cutting Veg of Urban Farming

The Cutting Veg has a bold goal - aiming to cultivate personal, social, environmental and economic health. But for Daniel Hoffmann and his farm, that's exactly the mission, and he's doing it through organic agriculture. With a farm just off Highway 427 in Brampton.

It's the rare professional farmer who can find himself waking up in a big city like Toronto and still be on the farm by 5:30am, but for Hoffmann it's all in a day's work. His large variety of vegetables, especially his 15,000 heads of garlic, grow well under the Brampton sun, and Daniel doesn't have to buy a whole farm - at least not yet.

Plus, he welcomes a veritable fleet of interns and volunteers to the farm, which is how I found myself waking up as the sun rose one Sunday morning, to go pick some weeds in Brampton.

As I arrive with my family at the McVean farmland, leased by FarmStart, an organization that supports aspiring farmers in part by leasing out sections of land, I'm immediately struck by the strange juxtaposition of suburban sprawl - luxury sprawl at that - with conservation and farm land. Not to mention a factory just barely in the distance that serves as a near-constant reminder of the world we live in; a reminder that Daniel's vegetables are an urban oasis.

With the sun only getting hotter and the work not getting any easier, Daniel quickly puts us to work, reminding me several times that there will be a farm tour later, since I can't seem to stop asking where the vegetables I buy each week at the Sorauren Farmer's Market are growing. Task one is to hand weed the parsley bed, which doesn't prove too difficult. 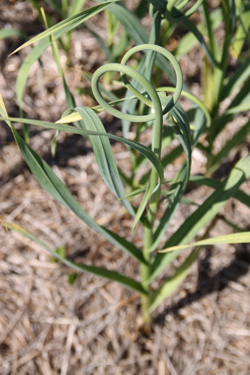 Hand weeding the cucumbers proves more challenging. Being such a popular crop there are two rows, but unlike the parsley bed, the undesirable plants were strong here. While yanking weeds from the parsley took virtually no time at all, the weeds in the cucumbers prove to be more stubborn and plentiful; no wonder Daniel said if we could get through the row he'd be thrilled.

Fortunately lots of people show up each week. "I love that the farm is close enough that people who want to participate, can get involved without driving too far," Daniel says. "As a social worker, I aim for the farm to be a therapeutic resource to the community, and [I] know that the proximity to Toronto enables mass community involvement."

He's right; I've brought perhaps the youngest "volunteer" at 3 months old - my son - but we were not the only family making this the morning activity and the regular farm updates make it clear that 20 volunteers any given morning is typical.

The Cutting Veg doesn't rely just on volunteers, though; there are 10 farm interns, all unpaid (or, as Daniel says, "not paid in money"), but they have stuck with farming all season. In exchange for learning about how to farm, the interns provide Daniel with essential labour. There's no way a small scale farm such as this could successfully grow all they do - and make any money - without the volunteers and interns.

Lively conversation and discussion of organic growing make quick work of the morning. Before we know it, Daniel's ready to lead a farm tour. The many hands have made light work of the cucumbers' weeds; the row is now neat and tidy again, giving the flowering plants lots of room to spread out. Several weeks later I'm seeing the fruits of our labour; the cucumbers at market are beautiful, plentiful and delicious.

The farm tour is fascinating, and a firm reminder that growing organic food is a lot of work. Looking at the rows of corn - in almost desperate need of weeding, most likely by hand - one visitor asks how commercial farms handle the weeds. "They probably use an herbicide," Daniel reluctantly responds, "I think hand weeding the corn will be next week's big task."

We also see the wide variety of produce, the amount of manual labour required at almost every turn and some of the planning that sets farming apart from keeping a backyard kitchen garden. Immediately apparent are the various timelines of squash, salad mixes, beets - almost everything they grow. This sort of succession planting is crucial to maintaining a consistent supply of vegetables, extending sales across the season. The farm's popular salad mix has been consistently available all season thanks to the many staggered plantings. 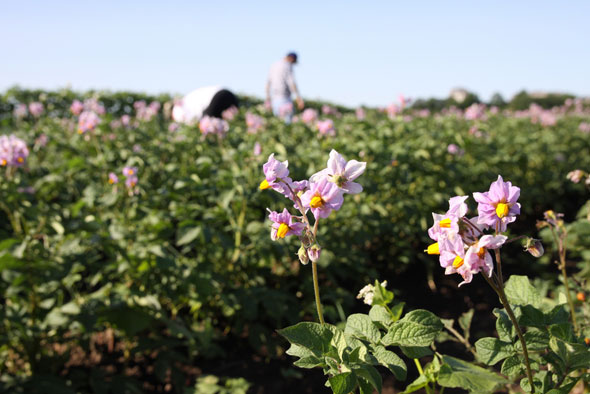 In addition to the Sorauren market in Roncesvalles, Daniel's "veg," as he likes to call it, is available at Saturday's Wychwood Market and through a CSA for Scarborough residents.

Although I was under the sun and working hard all morning, there was something enormously satisfying about tending to vegetables grown so close to home. That must be what Daniel is talking about when he says he 'wants to be part of a culture that is healthy at its roots."

After the farm tour we all did some hand weeding of the enormously popular salad greens mix - no small task, which gave me an appreciation of its weekly availability and price - but when Daniel came to tell us it was time to leave, and we weren't done, several of us tried to protest that we should stay and finish.

Daniel insisted we were done; that we had done enough. He sent us packing, in a sense, as he insisted we take as many garlic scapes as we could carry. The biggest crop for The Cutting Veg is garlic, and their "Global Garlic Project" includes some 15,000 bulbs of 12 different international varieties of garlic. Each plant needs its scape - the flower-to-be - snapped off to promote the growth of the bulb, and Daniel made it clear that they couldn't sell all the scapes that remained.

This also represents a new economy for small farmers. Even a few years ago I didn't see garlic scapes at market, but now almost everybody has them. Daniel - and others - can't sell them for a lot of money, but with so many scapes that have to be harvested, getting a small amount in return makes a big difference.

In my case, in exchange for the time it took to snap a couple hundred scapes, I got to take them home and chop 'em up for my freezer. Between that supply and my order of garlic heads I'll have organic garlic grown in Brampton for the rest of the year, something I feel especially good about when the alternative is coming from China.

For now the arrangement for Daniel is perfect; he can live in his home community and his wife can keep her day job. His goals, being "part of a culture healthy at its roots" and to "make a contribution in the world," are reflected in the way he runs his farm. One day he'll likely buy his own farm, which represents a big jump from how he started out: "to learn to grow my own food."

For us, spending a morning on the farm but being back in the city for lunch provided a connection to our food in a powerful way, but also an amazing excursion. Thanks to Daniel and the other FarmStart farmers, just off the highway in Brampton, a whole lot of Torontonians can eat the most local, fresh, organic produce available.