This past Sunday Second Harvest hosted its 19th annual Toronto Taste event, a fundraiser meets celebrity chef eat-a-thon that was held at the Village of Yorkville Park (home of the Big Rock).

By "pairing cuisine and compassion" Toronto Taste brings together the city's top culinary masterminds to offer up tasty morsels for philanthropic party-goers. This year 40 chefs and restaurants donated their time, culinary talents and food to the event. The lineup included heavy hitters like Mark McEwan, Jamie Kennedy, David Lee, Donna Dooher, Anne Yarymowich, Didier Leroy, and Marc Thuet to name a few, making it the food-lovers equivalent to shooting fish in a barrel. 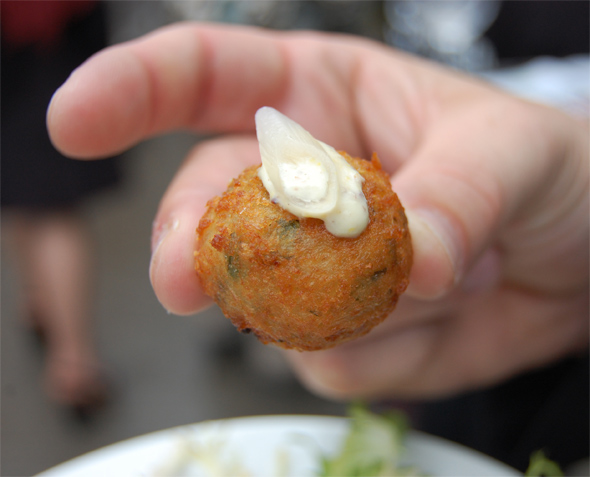 Second Harvest is a non-profit organization that collects fresh foods that would have otherwise gone to waste from grocery stores, food manufacturers and distributors. They collect enough food to provide over 15,000 meals a day to children in after-school programs, seniors on fixed incomes, women fleeing domestic abuse, psychiatric patients, homeless people, and other folks who have fallen on hard times. 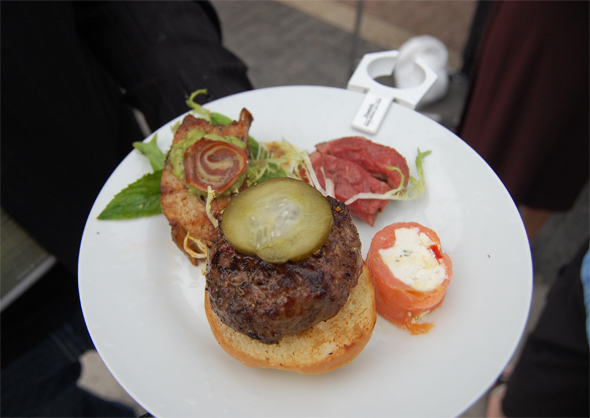 While I am sure it was not the intention of the event organizers to pair gluttony with compassion (most guests ate with discretion), I felt like a kid in a candy store and could not resist the sumptuous presentation of bite-sized delights lined out before me. I had saved up my appetite all day, so I tasted nearly every item that was on offer.

There would be too many to comment on, so I will point out a few of the items I felt were right on the money. The Ontario lamb ribs with minted fava bean pesto and crisp lambcetta from Anne Yarymowich of Frank were, in my opinion, the best thing on offer. The mini burgers from David Lee and Victor Barry of the recently split Nota Bene/Splendido family were topped with nothing but a pickle, but needed absolutely nothing else because they were near perfect. Mark McEwan's sesame crusted seared tuna with pickled radish and a variety of savoury Asian influenced sauces was as good as it was gorgeous on the plate. 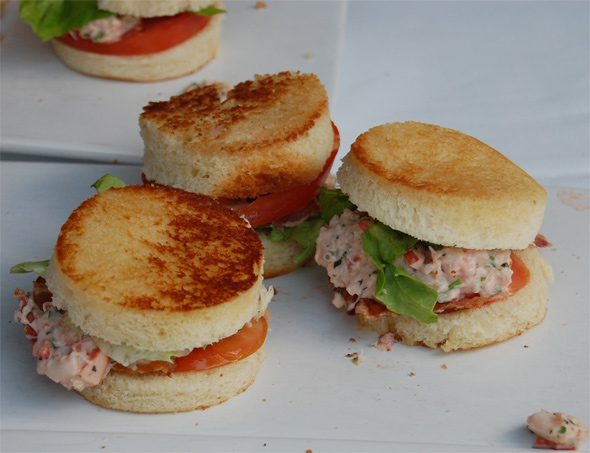 And for desserts, it was a toss up between the rhubarb trifle from John Higgins of George Brown's Chef School and the chocolate truffles from Joanne Yolles of Scaramouche. My sincerest thanks goes out to all the chefs and their brigades for all the hard work they put into creating such delicious fare.

One thing I should comment on, though, was the lack of vegetarian options (nevermind vegan). There were only a couple of savoury options meaning any veg-head would have had to satisfy themselves for the most part with dessert, and even these options were only ovo-lacto friendly.

But if the veg-heads couldn't fill up on the fare, they could always hit the sauce. Producers like Steamwhistle, Chateau des Charmes, Creemore Springs, Henry of Pelham, Amsterdam Brewing Co., and Cave Spring Cellars also donated their time, effort, and libations to the cause. 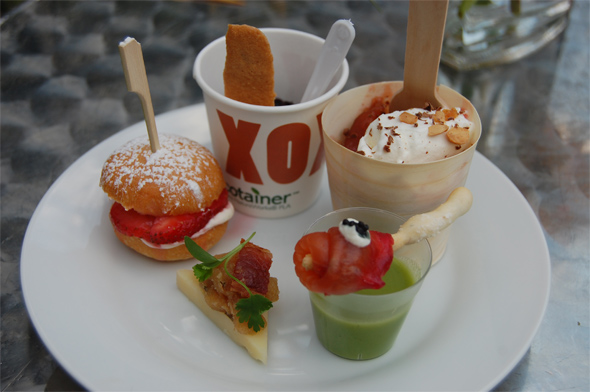 The Toronto Taste event generates over $250,000, enough money to provide meals for 500,000 people in the city. Aside from the food, the event also boasts a pretty solid live auction, a raffle, a fine wine auction and an online auction on eBay that is open to the public until June 30th.

Toronto Taste provides a unique culinary round-up from the city's top chefs that is not often seen. So if you love food and are feeling philanthropic (the event costs $225 per ticket), you can make Toronto Taste one of your charitable to-do's next year.