After years of planning, a mountain of red tape, and a $40,000+ investment, four of the eight carts involved in the program opened up shop for the first time today (to the chagrin of local dog vendors).

"We're open to the city!" proclaimed Blair Bonivento, who's cart is located at the West end of the strip of chip trucks and dog vendors at Nathan Phillips Square. He and his wife Kathy are celebrating their 23rd wedding anniversary by dishing out Greek souvlaki and salads to hungry and curious passersby.

"It took a lot to get here," explains Kathy about the experience of becoming one of only eight vendors who got the city's seal of approval. Extensive regulation, being interviewed by and having to cook for a panel of chefs and health inspectors ("Now that was intimidating!"), and extensive staff training were just some of the requirements of the program.

Seemab Ahmad, who immigrated to Toronto from Pakistan in 2006, is set up at the East end of Nathan Phillips Square. Owners/operators of the carts are required to be there for at least 70% of their operating hours. When I stopped by Seemab was serving up Central Asian/Persian dishes like chicken biryani ($5), salsa kahari (a tomato based curry) served on a pita ($5), and lassis ($3). With a chicken souvlaki wrap ($5) already in hand from the first cart, I decided to go for the rice-based biryani. 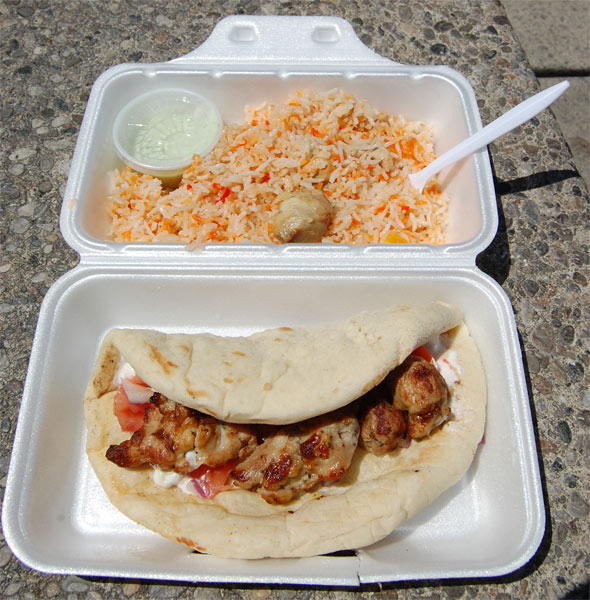 The souvlaki was quite tasty, even if the chicken was a smidgen on the dry side (one of the challenges of holding pre-cooked foods in the cart, as all foods must be pre-made in a licensed kitchen). The chicken in the biryani held a little better (being immersed in saffron scented rice) and was perfectly seasoned. It was served with a yogurt and cilantro based sauce, which was a great condiment and complement.

Right across from Steamwhistle at Roundhouse Park, Andnet Zere was scheduled to be serving up Eritrean/Ethiopian injera with legumes, vegetables, lamb or beef. But when I swung by there at about 1pm, they were just unloading the cart and having problems with the gas hook-up. Too bad, as they were missing out on gads of Jays fans who instead grabbed dogs before the game. 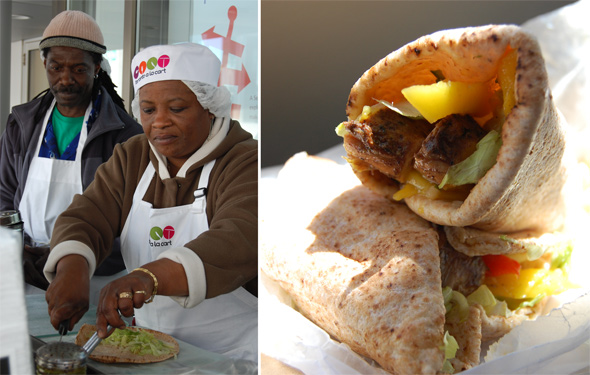 The fourth vendor opening today was a Caribbean cart at St. Clair & Yonge, right outside the south-east St. Clair Street subway exit. Bridgette Pinder, who told me she has been professionally cooking Caribbean for over 20 years, was offering up a jerk chicken fajita topped with lettuce and mango salsa ($5) and grilled pineapple ($2). Bridgette sent me off with the most genuine "Enjoy your meal!" I could have hoped for - and boy did I enjoy it. The smokiness and spice of the chicken was perfectly balanced with the salsa, which wasn't overly sweet. 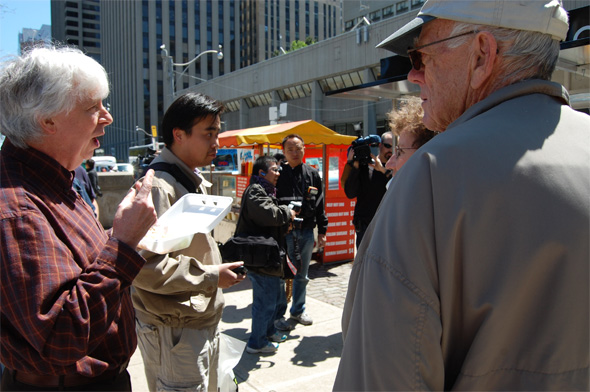 The rest of the vendors will be rolling out over the next couple of weeks. Even though the city has been behind the selection and regulation of the carts, they have no say in when the vendors decide to start operating, or the hours they keep. In an interview with the National Post, Councillor John Filion (who headed up the A La Cart project for the city) said "There's a popular misconception. The city designed the A La Cart, but they're eight independent entrepreneurs." Filion was on hand today at Nathan Phillips Square, talking to curious Torontonians about the program while eating his biryani.

With their distinctive A La Cart branding it won't be difficult to spot these new vendors. The city has a list of all of the locations.