Celebrated Toronto Chef Susur Lee comes home and offers a taste of what he's learned from the big city in his New York restaurant Shang to Toronto for the month of April in the form of a 5 course $60 fixe-prix menu billed as Shang NYC @ Madeline's.

Much has been documented of Susur Lee's rise from unknown Chef at Peter Pan's at Queen & Peter to his Lotus restaurant and then to Susur, Lee and most recently Shang in Manhattan. He's been featured in the major newspapers, city and food magazines, television shows including Iron Chef America and Restaurant Makeover, blogs like this very one you're reading, and even has a very detailed Wikipedia page.

I always imagined I would make the trip to Susur one day and when it closed for his leap to the Manhattan restaurant scene I figured I'd just go there one day. Fortunately my friend heard about the Shang NYC @ Madeline's special and invited me to come along to sample his mastery. 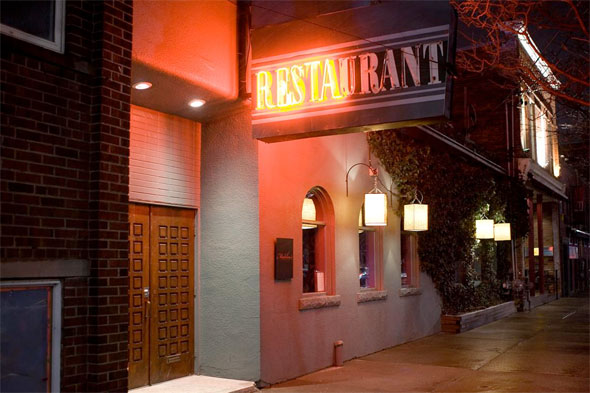 Madeline's takes over the prime location from the desisted Susur, Susur's former flagship restaurant in his own name sake. Set in the up trending King West block between Spadina & Bathurst next to Portland Ave, the neighbourhood has experienced club migration from east of Spadina for the past few years along with several new condominiums.

A little obscure and secluded, the building looks sort of like a warehouse on the outside save for a half lit "RESTAURANT" sign and a small plaque bearing its name.

Inside the dining room feels somewhat trendy yet minimalistic, coming alive as the evening light disappears and the colours of the room come alive, a tribute to Susur's designer wife Brenda. We sat at stated "the best" booth in the house in the far right corner by the window.

I must admit, with the past few years I've grown a disdain of Toronto's "fine dining" circuit with sub par experiences at pretentiously priced restaurants with snobby service. Contributing to this outlook are unremarkable and forgettable dishes at full prices during Toronto's Summerlicious and Winterlicious festivals. I've found sticking to my personal favourite tried and true restaurants, whether a discount pho joint in Chinatown, a homey Italian restaurant in Corso Italia or a quality uptown sushi bistro - the way to have an enjoyable meal out. Despite this, based on first-hand accounts and media hype, I was going in with high expectations.

As our dinner was with the special tasting menu, I did not view the regular menu and went straight for the wine list. I suppose there was no rule of thumb, but it was difficult to find a bottle to share at the table that did not more than double the cost of a single dinner price. Even with this night of splurging, frugality was still in vogue. I believe we settled on one of the California chardonnays. (Tip: If you go on a Monday, Tuesday, or Wednesday this Spring, you can bring your own wine and pay just $1 for corkage!) 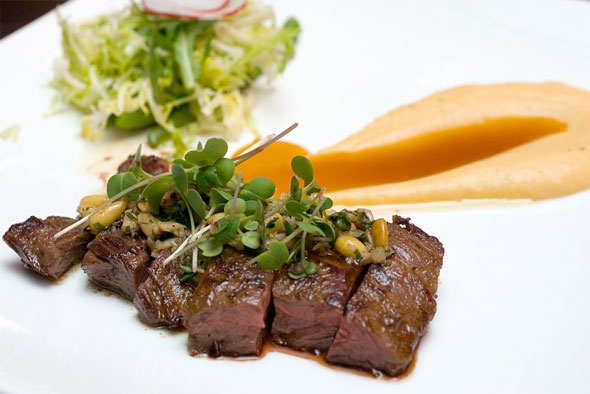 Course 1/5: White peppercorn marinated skirt steak with pine nut brown butter and potato puree and a side of green beans and frisee lettuce.

The first course was an immediately visually appetizing plate of steak & salad. As the dinner consists of several courses the amount of food seems perfect. The steak, while not twice the Health Canada's guideline for food intake like a typical steak restaurant, was delicately spiced and juicy while staying light. I didn't find the accompanying sauces added anything other than visual value and the salad added a refreshing cleansing effect after each bite. While not apparently obvious it was a first blend of Asian-French fusion blending in Asian white pepper seasoning and pre-cut meat preparation with classical French steak-frites (which explains the potato puree). 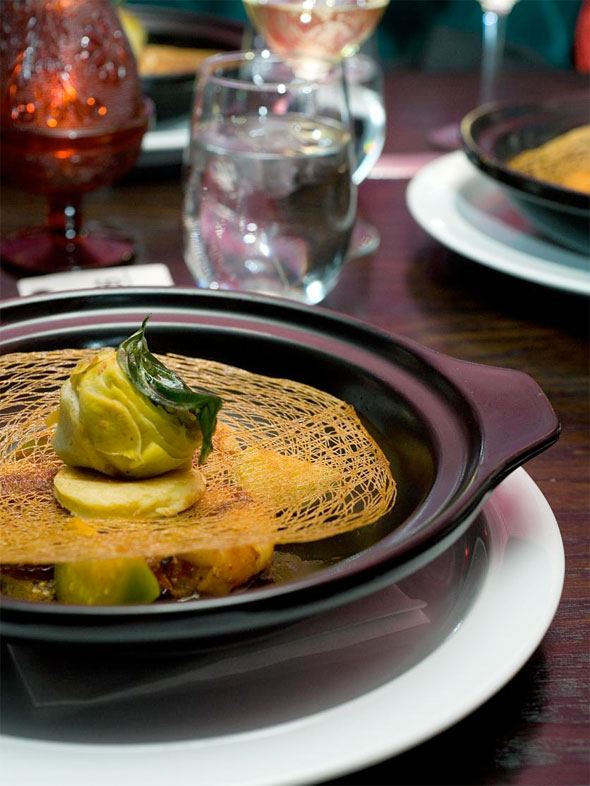 The second dish impressed with its presentation, although how to traverse through it was a bit of a mystery. I ended up eating it layer by layer. The artichoke was firm and spicy, the garnishing leaf of spinach less so. The second layer was an an almost flavourless blini (pancake) - and a little confusing. I assume that it was associated with the artichoke on top but it looks like it serves more of a presentation prop than anything else. Beneath the blini was crispy web lattice reminiscent of tasty and crunchy fried vermicelli to the degree of which can only be had at home. The tomatillo below was an interesting take on tomatoes - not ripe, sweet & juicy, but a little tart. The shrimp below was tail-on and heavily seasoned in XO sauce which was typically Southeast Asian spicy and greasy. Again, this dish was an Asian fusion concept with an Asian flavour applied to western ingredients and presentation. 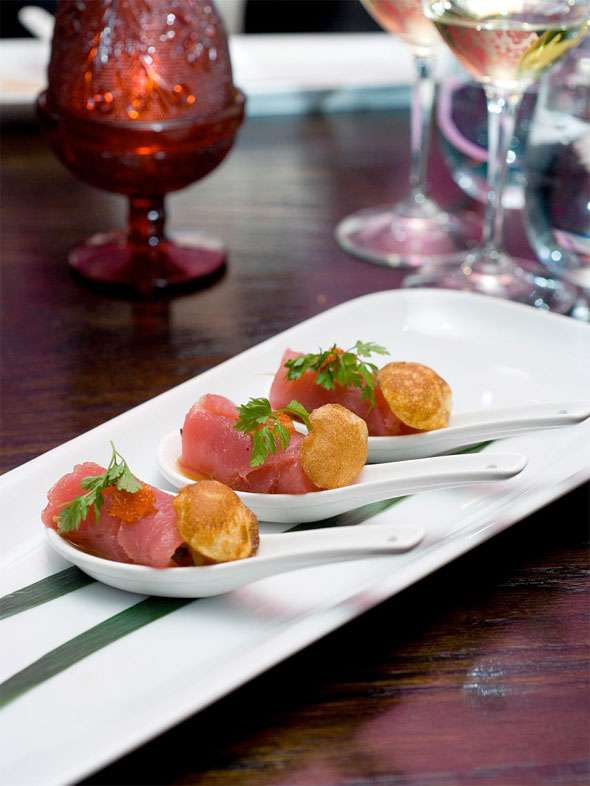 The third dish was a visual delight, so much so that I forgot to photograph it before lunging into two of the three pieces. Bright raspberry red pieces of Tuna grace a spoon, wrapping daikon and in a splash of ponzu. While initially perplexing of having sushi at an Asian Fusion themed restaurant, it was an interesting and creative take on simple tuna sashimi with soya sauce but with slightly exotic complements in unconventional methods. While daikon is essentially radish and ponzu is like citrus flavoured soya sauce, the compilation of familiar and different make for a wholly new combination with unique flavour. The potato puff contributes a contrasting crunch reminiscent of a Pringle chip, which is a good thing. 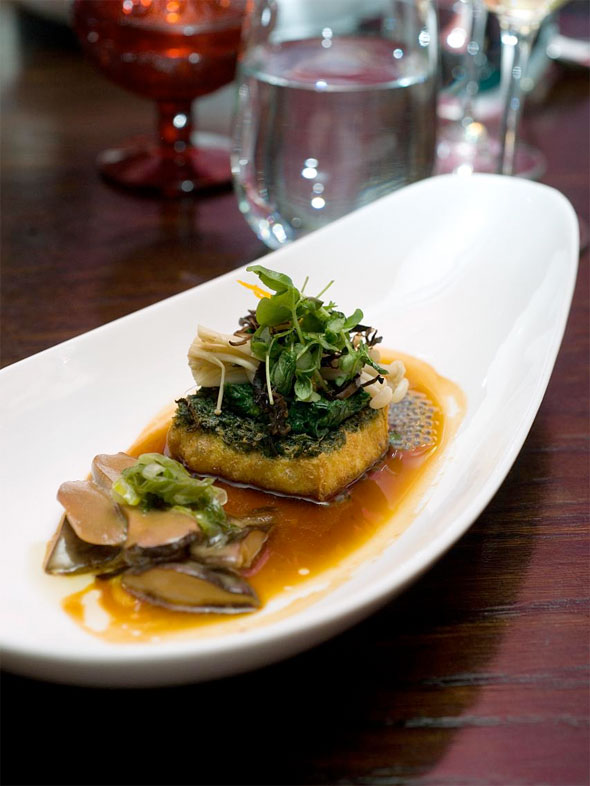 The fourth dish was tofu, and fried tofu is aces in my book. In any shape, way or form, I could eat fried tofu all day, everyday, until the day I die - and I would die happy. The soya sauce added delicate, salty flavour and the creamed spinach was a nice complement. It was simple and satisfyingly excellent. At this point I remembered that Susur was noted for countering the standard notion that meals are served from lightest dish to heaviest, (think salad then meat & potatoes then dessert). It seemed that this course would fit better in that declining scale of heaviness before the tuna, but alas perhaps the star chef knows best. 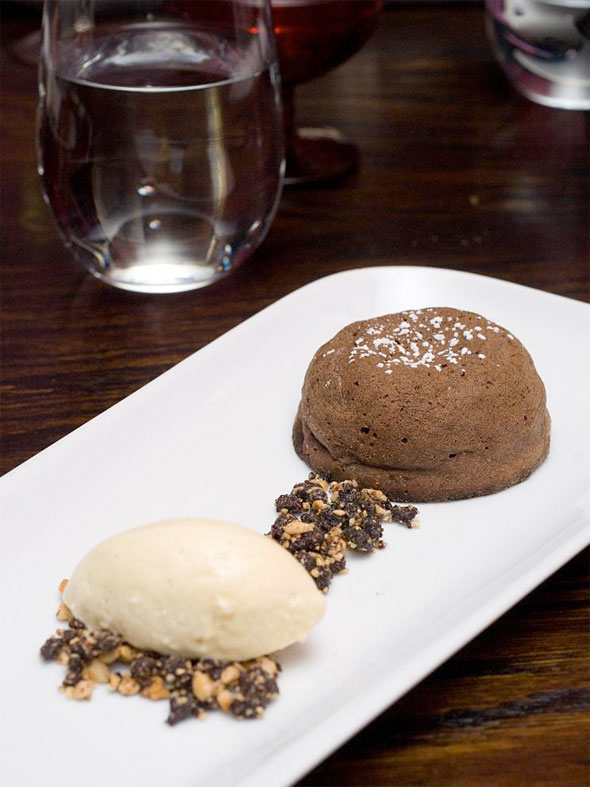 By the time the fifth course came, I was surprisingly satisfied for an entire dinner and the dessert was... icing on the cake. The chocolate and hazelnut was candy bar sweet and complementary to the ice cream which was lighter by comparison. The gooey, warm molten chocolate cake was satisfying both in terms of size, warmth and sweetness.

I admire Susur for putting himself on the line in his jump to Manhattan. I hope he does well and grows to be an even better chef. For this meal, his ability to create new and original variations on typical dishes and actually make it work well was well demonstrated. In the end I was impressed. It offered a refreshingly new and enjoyable experience at a reasonable price which is rather difficult to find in fine dining. It wasn't ground-shattering value, but the flavours were fresh and well balanced, and I didn't leave the restaurant hungry nor stuffed - it was just right. The service was quick, friendly and casual, and overall dining at Madeline's was a pleasurable experience. I just wish they had some house wines at house wine prices.

You too can experience Susur's Manhattan menu - but only til the end of April 2009.

Writing and photography by guest contributor Jim U.