I've been spending a lot of time underground these days. Most recently I attended Chef Karen Viva-Haynes' foray into the underground at her "6 Degrees" kitchen dinner party.

In order to attend you must have a connection in some way to Karen or her business, Viva Tastings. Yes, you have to be within six degrees of separation.

I got the invite from Tim, and he got it from Karen herself - which put me well within eligibility.

Karen is the owner/operator of Viva Tastings, a company that offers full service catering, cooking classes and gourmet take-away meals at the St. Lawrence North Market on Saturdays. As a member of Slow Food Toronto, Viva Tasting's main focus is on promoting and providing local, artisanal, and mindful foods. The 6 Degrees dinners happen bi-monthly, ranging anywhere from $75-95 dollars per person (BYOB).

Among the group of nine strangers that I dined with that night were a brand partnership coordinator for Much/MTV Canada, a cookbook writer, a publisher, an associate from the fashion PR firm Faulhaber, and a writer/editor for DineTO.

It was an interesting group of people, both in ages and professional backgrounds, but the one thing we all shared was a sincere love of food. But the chitchat always came to a halt when Karen served the next course, so we could hear her explanation of the dish being served.

We enjoyed the thoughtfully prepared 5-course meal in the setting of Viva's catering kitchen (set up in the basement of Karen's home), where the work counters were set for dinner and created an intimate chef's table as Karen finished our meal on the nearby stove.

The amuse bouche was a parmesan crusted caperberry (not pictured due to technology crapping out on me; damned dud memory card).

The first course was a mushroom ceviche including a mix of fresh Ontario mushrooms. Avocados and red onion complemented the mushrooms without taking away from them.

The second course was a tomato coconut soup topped with lime-toasted pepitas. Sesame and mustard seeds were added for texture, and I got a lot of lovely cumin flavour from the soup as well.

The third course was a "green" bouillabaisse, meaning it was all veggies and no seafood. It was Chef's favourite course of the meal, and ended up being one of mine as well. The base broth was made using tomato water Karen had made last September from Ontario tomatoes. The veggies included fennel, artichoke, spinach, and cucumber. Strips of orange peel that were cooked beautifully (and left no trace of bitterness) were a tasty surprise whenever I came across them. It was served with a piece of crusty organic artisan bread topped with a garlicky and flavourful aioli.

The fourth course was beef short ribs in a port sauce with roasted cauliflower (one of two pictures that made it out of the underground alive). The ribs were fall-off-the-bone tender and the port sauce was the perfect balance between sweet and savoury. Being a cauliflower lover, I would have liked to see some separation between the ribs/sauce and the veg, as I wasn't able to fully appreciate the roasted flavour of the cauliflower with them in the sauce as well. 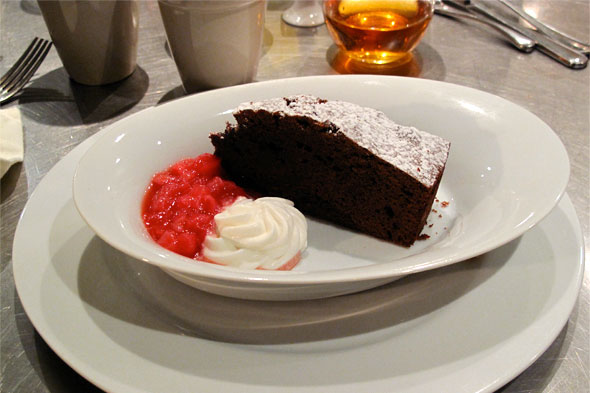 The last course was a chocolate cake with Ontario rhubarb and ginger compote. The compote was a delicious reminder that real spring (and therefore growing season!) has officially arrived.

One thing I really appreciated about the meal was the serving sizes - they were well thought out; large enough so that you feel you got your fill of each dish, but small enough that you could fully enjoy each course and not need to be rolled up the stairs at the end of the meal.

With new underground supper clubs popping up quicker than murder victims in CHUD, there will be more and more digging to do......