Friday night marked, for me, the eagerly anticipated second annual Brewer's Plate feast, presented by Green Enterprise Toronto (GET), Local Food Plus, and Slow Food Toronto. Last year's inaugural event was by all measures a smashing success, and my review was nothing short of a rave.

At this year's installment, the food and beer were good; at times downright excellent. Doors opened at 6:30pm, and I arrived at about 7pm, halfway into appetizers. I was surprised by the long line of people waiting to get in. Unfortunately, this first line foreshadowed the many more queues to come.

Last year the event attracted about 175 people to the Berkeley Church, and this year they clearly decided to step it up a notch in size by moving it to Hart House, which by all accounts was a beautiful location. The entrance to the event led into a hall with the appetizers (and later the desserts), with a patio off to the left and the main dinner hall to the right. Nice concept. And it might have worked... with about half as many people, and enough food for everyone. 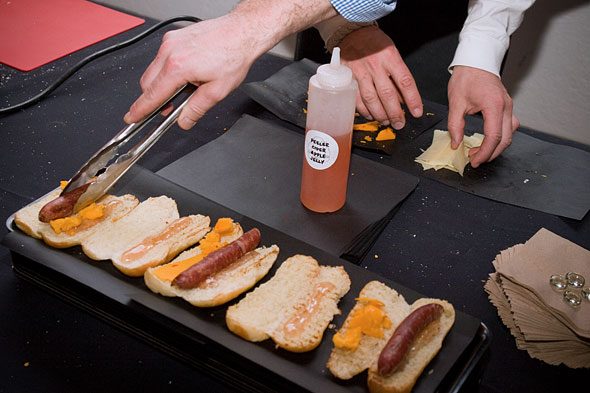 Unfortunately for everybody - and most people paid $100 for this - the event appeared to be completely over-sold. First I waited in line for the sublime Buddha Dog, which as usual had perfectly paired flavours in three delicious bites. Then I waited for tandoori pizza from Magic Oven, which tasted pretty much like chicken on a pizza. Good pizza, but not enough to distract me from the Master Shucker in the Oyster Boy line. He couldn't open those Maine oysters fast enough, and I could see why: certainly not Oyster Boy's finest, but I didn't see anybody complaining as one after another got sucked back.

At least the outdoor patio was gorgeous as the first true taste of summer lingered into the evening.

I figured things would improve when the main courses opened for business, but alas, with everybody chomping at the bit for more food, it was like bees to honey and unless you were first in line 30-40 minute waits in long lines for each small plate gave us plenty of time to wonder just how the organizers thought this would work. 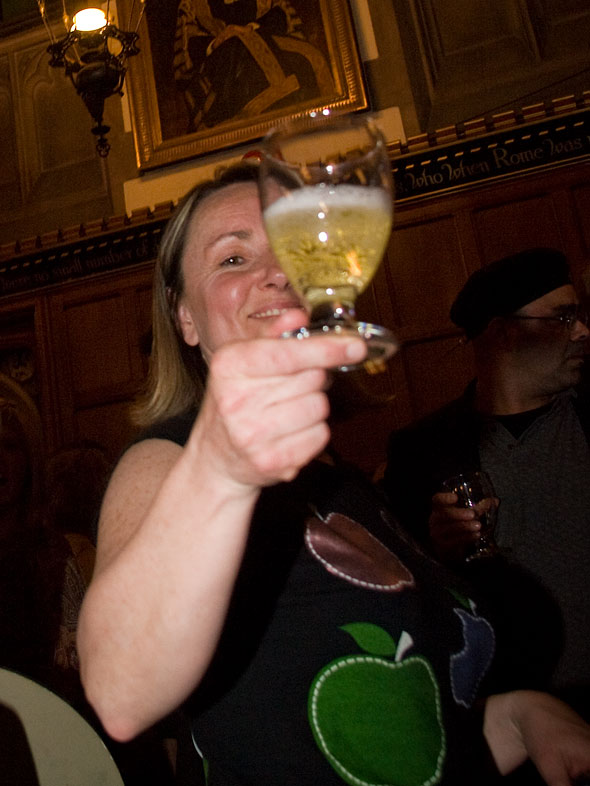 One bright spot was that the beer available at each station was plentiful and helped us get through the lines. And a true bright spot of the night was my discovery of Waupoos Cider from Picton. Brewed from about a dozen varieties of apples grown on site, all picked at the height of freshness and brewed just once a year, the cider was clean, crisp and more than a little refreshing. It wasn't the sweet cider of Strongbow, but it wasn't bitter or displeasing; I could happily drink a pint on a summer day, or just about anytime.

But back to the main dishes, the menu had whet my tastebuds before my arrival. And the food, overall, wasn't so much disappointing as some of it was underwhelming after such long waits. The elk ragou would have been nicer with more succulent elk, but the flavours were there and the concept was nice. 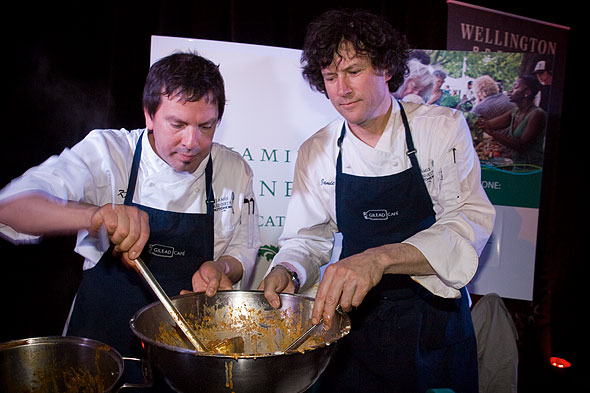 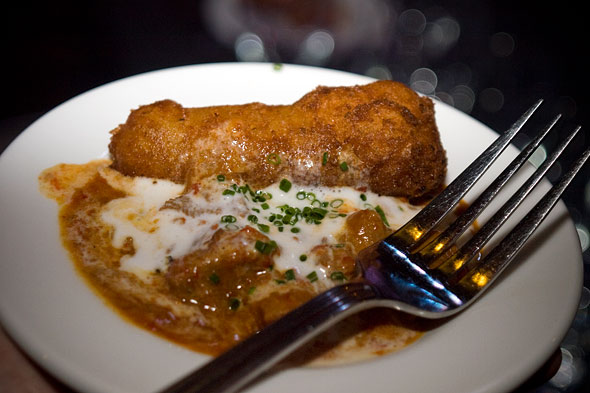 Once again Jamie Kennedy nailed it; he seems to have an understanding of local food and pairings that is above and beyond his colleagues. His doughnut and pork were the crowd favourite, and not just because Kennedy is the most household name among the chefs represented. 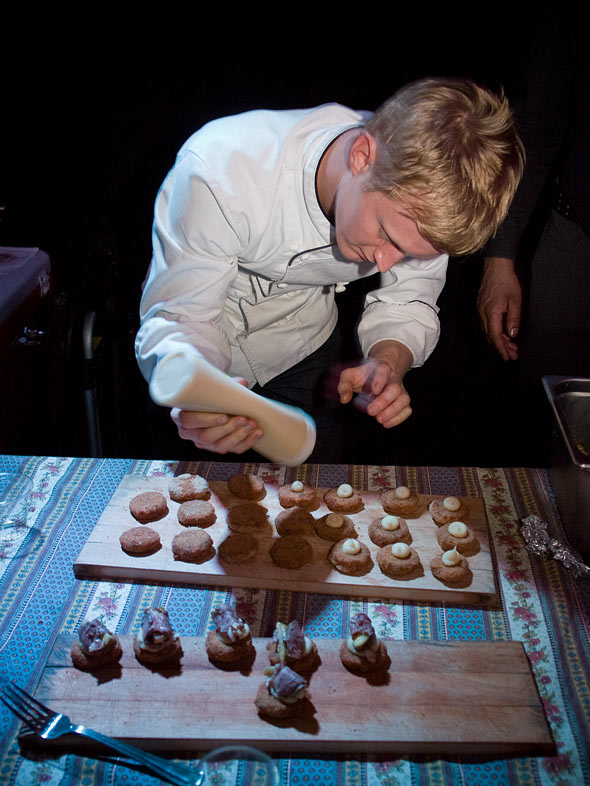 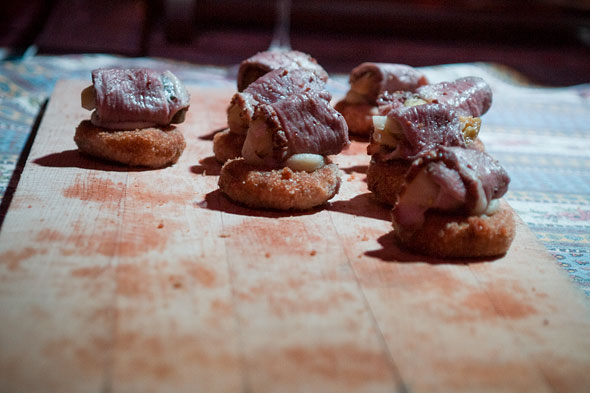 A close second in my circle was Brook Kavanagh's duck two ways - I think everybody had at least two or three of those. The flavours worked brilliantly and the total package was something to savour. 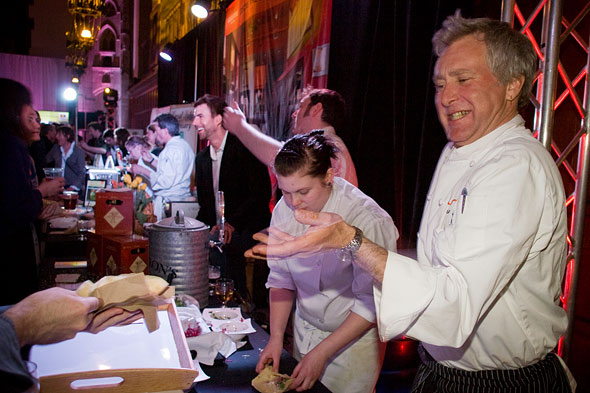 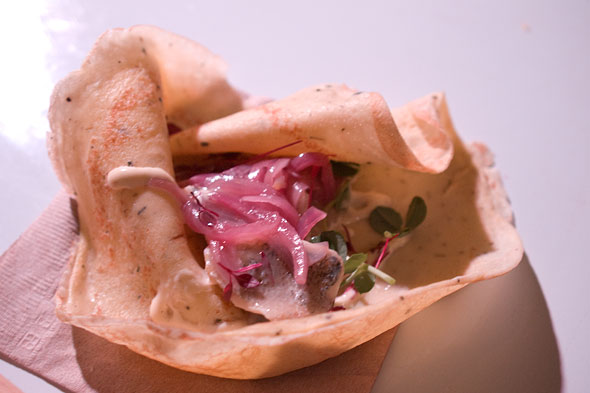 Unfortunately Brad Long - of Veritas and Restaurant Makeover fame - ran out of the filling for his crepes, so the small bite of the total package I tried may not have been representative. I found the fish got lost in the creation, which is disappointing as the "vegetarian" version made with the remaining ingredients showed real promise. I felt bad for the long line of people behind me, who had waited patiently only to learn that the food was gone. Too bad the rest of the chefs then also started running out of food, as my friends and I had only tried two thirds of the main dishes at this point (and, as luck would have it, dessert was disappearing). It seemed as though most of the chefs didn't have enough food to feed all in attendance; a real shame to say the least. 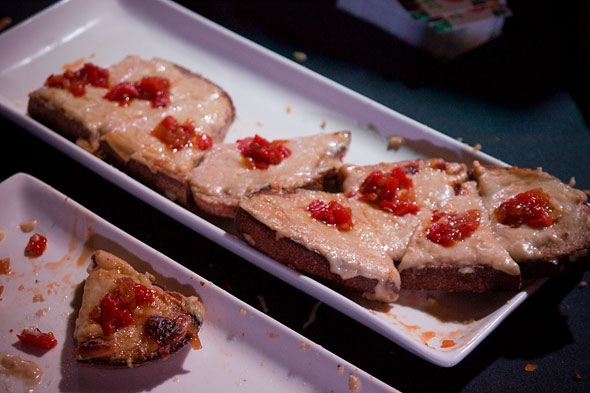 The cheese on toast - rarebit by the Gladstone's Marc Breton - smelled a touch foul but tasted quite nice. That's what happens when you use incredible Monforte cheese. Mark Cutrara's beef tartare divided the audience. I loved it for the same reasons others disliked it: a bit salty, a bit of a tangy acidity and a creaminess brought a complexity I wasn't expecting. 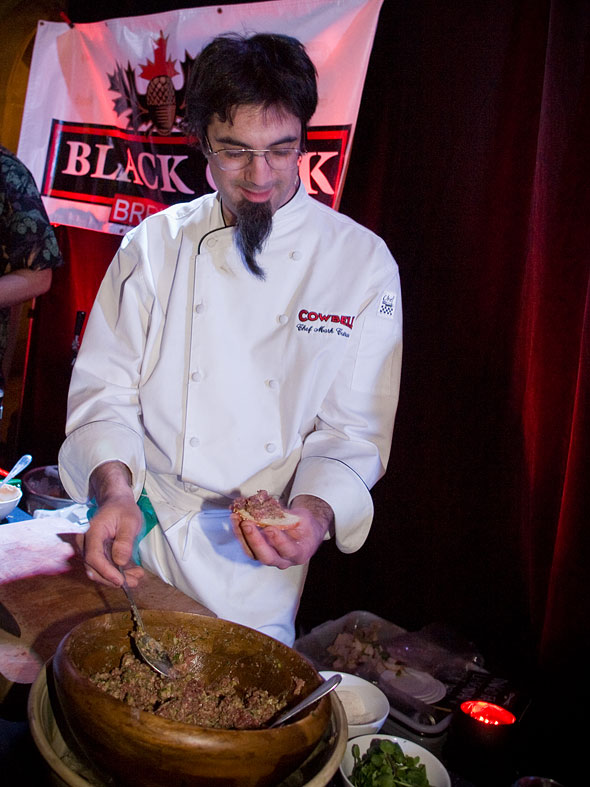 The cheese plates for dessert were interesting, although nothing so memorable that I was inspired to take notes, and the rest of dessert must have been good enough to inspire everybody who got there first to devour all the good options. The maple sugar balls on a stick melted in my mouth and were sweet and nice, and some sort of spicy shortbread-like item was not something I need to eat again. I hope there were other items; they must have been good. Three of our party of five made it to the dessert area too late to sample anything but the cheese, leaving them determined to stop somewhere on the way home for sweets.

In my group the food was generally deemed hit-or-miss, but I'm willing to give it an overall positive assessment. If we had been able to simply walk up and get food - like last year - I don't think we'd be as critical. But since we were elbow to elbow and waiting for what seemed like all night for each taste, the memorable part of the evening won't be how to eat locally in April but how not to run a food event ever.

To literally add insult to the metaphorical injury, when the (first-time) auctioneer tried to get peoples' attention, shouting into the mic, he openly called my friends and other guests sitting at the front-most tables "unaffected". Since one person didn't take that sitting down he responded that they were akin to "moss in Stanley Park". Sound weird? I still don't get it either, and I was glad to have missed most of the otherwise painful auction.

In the end, it was like a bad airport experience. After waiting in line after line, only to have to strip down to get through security, it felt like we were "dining on standby". I was lucky enough to get appetizers and mains; my friends just got mains. The dessert flight took off without us, but by then we didn't really care.

Were it not for the fact that the event was a fundraiser for a great cause, many may not have been as understanding or patient as they were. Hopefully the organizers can learn from the experience, and go back to the drawing board for 2010 - to solve some of the logistical problems.

Photos by Photosapience.
blogTO is a sustaining member of GET.