Feed Yourself, With Architecture

From now until April 30th, the Design Exchange is hosting the (FREE!!) Carrot City exhibit, which explores sustainable growing practices and food security in the light of urban architecture. Through profiles of a variety current projects, proposals, or student theses, Carrot City gets us thinking about creative ways to reconnect urban spaces to good ol' mother earth through growing food.

It was great to see a large number of these projects are Toronto-based. Among a few of my favourites are:

Post Carbon Don Mills
Michael Biois of Ryerson University developed the concept for Post Carbon Don Mills, whereby a decommissioned rail corridor in Don Mills would be used to integrate leisure and community spaces, transportation systems (bike, pedestrian and light rail) and urban farming. The gardens would be communal and feed members of the immediate area, excess produce would sold at farmers markets throughout the city.

60 Richmond Street East
This is a co-operative housing project designed by Teeple Architects and currently under construction. The project is aimed at providing affordable housing to people in the hospitality sector who were displaced by the Regent Park redevelopment. It will have an in-house restaurant, cooking studio for lessons, and a training kitchen that will give residents the opportunity to "work from home." Gardens within the building will supply the restaurant with produce and all organic waste will be used in composting. It is being built to LEED Gold standards. 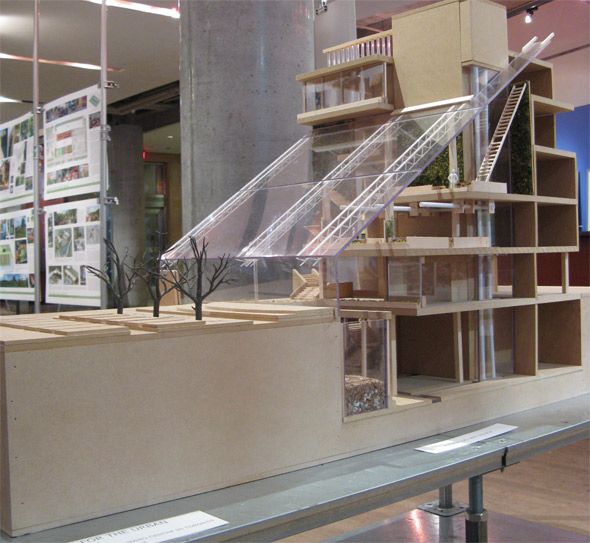 The Urban Farm
A partnership between the Toronto Region Conservation Authority (TRCA) and the City of Toronto has brought a 3.2-hectare urban farm to residents of the Jane and Steeles. In addition to its mandate to engage youth, teach the community about organic farming practices and promote healthy active lifestyles, the garden increases the availability of rare and nearly extinct vegetable and plant species.

The Carrot Common Rooftop Garden
The Carrot Common rooftop garden is located atop 348 Danforth Avenue, home to well-known natural food store The Big Carrot, as well other businesses and office space. After the original rooftop garden had to be removed for roof renovations in 2008, a design charette was held with University of Guelph Landscape Architecture students and now a phased rebuilding of the 10,000 square feet is underway. Members of the local community are involved in both the planning and building of the new garden.

The Design Exchange is located at 234 Bay Street. Exhibit hours are from 10am - 5pm Monday through Friday, 12pm-5pm Saturday and Sunday.