It's Friday night and you're feelin' a bit peckish. Y'wanna order something but you don't know what. Thai? Pizza? Chinese? Nah, all of those have been done to death.

How 'bout a little schadenfreude?

Is a morbid appetite piqued somewhere deep in that reptilian part of your brain at the chance to dine at the same table (in a metaphysical sense, natch) with Ted Bundy or Aileen Wuornos? Well for a paltry $20--the state allotted maximum for an inmate's last meal you can nosh death row and eat a replica of the final meal consumed by a death row prisoner courtesy Last Meals Delivery Service.

Now I'm quite proud of the fact that (like Hannibal Lecter) I'll put pretty much anything in my mouth at least once and I was intrigued by the write up this service got in Vice so I bit, and dropped them a line.

Orders have to be placed a couple days in advance It also helps if you're not sure what you feel like having in general since one of the conditions of this service is that your meal is chosen for you. That's right, for you serial killer fanboys & girls out there, you can't just call up and order a John Wayne Gacy with the works. And is it worth it? According to Paul Kneale, a local artist and the mastermind behind Last Meals Delivery Service: "That's the $20 question".

Paul studied at U of T and Universitaat Van Amsterdam though for this project he cites particular influences that come mostly outside of the traditional art-school sphere "from Yahoo News, watching people at the Eaton Centre, popular science etc."

Having served about a dozen of these meals in the past month or so, I was curious and asked him if there were any surprises during the course of the research for this piece regarding what someone chose as their last meal on earth and he mentioned "I don't know if I was necessarily surprised by a particular choice, however the choices do often reflect something of the condemned person. Jesus chose bread and wine, while others have chosen fast-food or even refused a meal altogether." 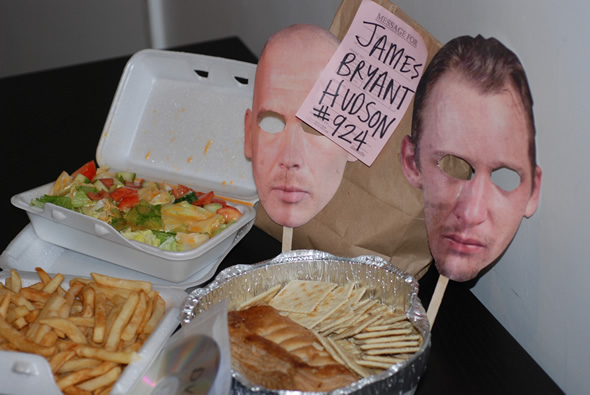 (other) source of all knowledge, last meals have a long and storied tradition in western culture as a way of absolving the executioner (and by extension their culture) of any guilt in the execution. So I was thinking a lot about all that Wikipedia-type stuff as I hungrily waited for my dinner to arrive.

I don't know what I was expecting. Possibly someone dressed as a grim reaper or in a prison guard uniform or something equally dramatic opening up a thermal bag with a puff of yellow sulfur-y smoke and handing me a styrofoam container that was eerily cool to the touch. Ideally, I'd've left my $20 (sorry, cash only folks) in an envelope at my front door and after a brief wait the doorbell would ring and the food would appear without any human agency to puncture the veil.

Paul's actually quite an amiable, handsome fellow who pleasantly explained that there was a DVD included with the meal to watch while you ate (which was scratched, didn't really play, and was just a jittery youtube burn of some CBN near-death experience stuff that really didn't enhance the meal much) and like a macabre happy meal, even comes with a "prize": a mask which I believe was supposed to be the face of the person who was executed.

After a little research of my own, I'm not sure my mask was an accurate depiction of the convict whose last meal I was about to share--and besides, there wasn't any mouth-hole cut out so I couldn't exactly wear it while eating which would've been kinda cool. So I was content to let it sit at the table and stare at me through empty eye-holes as I noshed.

By now i'm sure you're all just frothy with anticipation as to which lucky (or unlucky) dead-guy I drew. His name was James Bryant Hudson (prisoner #924), convicted of killing 3 people in a dispute over a shared driveway. His last meal included a cheeseburger, a tossed salad, large fries with ketchup, a pile of saltines, an apple turnover and for some reason I can't really fathom, a pair of brand-new white tube socks. Everything tasted okay; it wasn't exactly home-made.

I spent some time wondering which local greasy spoon supplied the dry, chewy burger, the overly French-dressed salad and how much it would've cost me if I'd purchased it on my own--I reckon about $10 minus the tube socks. But then again it was only ever tangentially about the food.

As far as the experience goes, it definitely provided some interesting dinner conversation about capital punishment, culpability, to what extent meat is in fact murder and whether nutrition is relevant to someone about to be injected with a lethal dose of potassium chloride. In an attempt to try and connect with this project I washed it all down with a beer (a luxury not afforded to death row inmates) in hopes of finding some kind of resonance that my conscious brain was either too unwilling or frightened to accept.

I guess I was looking for a more profound experience considering this was someone's last meal on earth but trivial questions kept popping up instead of more profound ones and it left me struggling with exactly what point was trying to be made out of all this.

I'd definitely recommend this project to anyone interested in something a little extraordinary for a quiet night in; make sure you have company cos conversation's a given. Just manage your expectations and you'll be fine since ultimately, it's an exceedingly interesting concept but the execution could use a little work.