When the Leslieville Cheese Market entered the neighborhood in 2006 it marked the beginning of a long debate: Was the gentrification of Leslieville sanitizing its charm? Would it become the next hipster hangout or West Queen West?

As the neighborhood continues its transition and more shops appear, the Leslieville Cheese Market's merits continue to be fiercely debated. Neighbours either salivate at the proximity to fine food or criticize the prices.

At some point along the way, the owners launched what has become their very popular Night School. Their aim is to educate and entertain, and likely convert some local palette's to the finer side of the cheese spectrum in the process. The hour long classes cost a mere $20.

I recently attended one called La Dolce Vita with a group of girlfriends for a chance to indulge in the cheeses of Spain and Italy. We were greeted by Julia Rogers from Cheese Culture with a glass of Torres Sangre de Toro from Spain. Julia is not a shop employee but was brought in for the Night School.

A true cheese expert, she explained everything from the history of each cheese to how they were made and what to pair them with. We sampled six Italian and Spanish cheeses moving from a creamy La Tur from Piedmont and ending with a salty Manchego from La Mancha. After each tasting she encouraged participants to share their thoughts and ask questions as she topped up our wine.

While she was clearly knowledgeable and able to answer even the toughest questions from the group's vegetarians, her approach to the class was very casual. There were 12 of us congregated in the small storefront and all through the class there was much chatter and laughing. 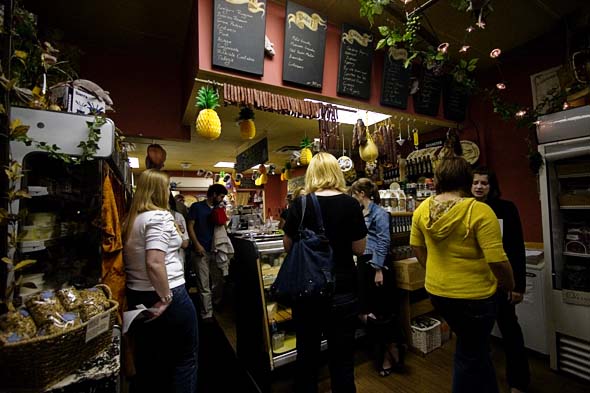 After class, participants were offered a 10% discount on any cheese purchases. I personally didn't take them up on the offer as I was content taking home the cheat sheet with the list of cheeses and pairings.

The Leslieville Cheese Market is located at 891 Queen Street East (Queen and Logan).