Things are heating up at Centennial Park, where the annual Toronto Ribfest is well underway. The opportunity to stuff your gut with slow cooked pork, kettle corn and funnel cakes runs through Tuesday, 11am to 11pm daily.

Just about any ribfest is on my short list of summer festivals, and this year's cookout certainly didn't disappoint on its opening night. 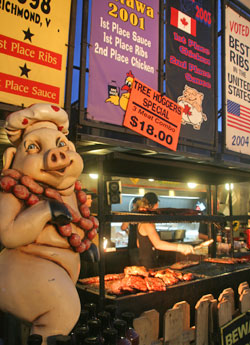 Part of the fun is in selecting a rib vendor from the wall of mobile grillers. Each displays their awards out front and has a giant wall of signs advertising the various prizes. I'm always amazed at how many people spend their summers driving city to city across North America doing nothing but slow cooking pork.

Four of us decided to divide and conquer. Two wanted to share a pulled pork sandwich, and then between us we shared 3 full slabs of ribs ($20 each; smaller portions available). We each lined up at our station of choice and then sat down to compare.

All of our selections had something going for it. The Jack on the Bone ribs had nice flavour, enhanced by the spray bottle of Jack Daniels, but the booze and bbq sauce was a little closer to burnt than we liked, but the ribs were meaty and tender underneath. The Gator ribs earned Best in Show - Sauce amongst us for the nicely sweet and generously applied sauce, but the ribs themselves were at times chewy or fatty. Earning Best in Show - Ribs was my selection of the night, all the way from Albuquerque, New Mexico, was Uncle Sam's. Although they mopped on lots of sauce, the real winning feature was the tender meaty ribs themselves.

There's a nice selection of Canadian and American operators, each probably in their busiest week of the year with Canada Day now and Independence Day south of the border next weekend. 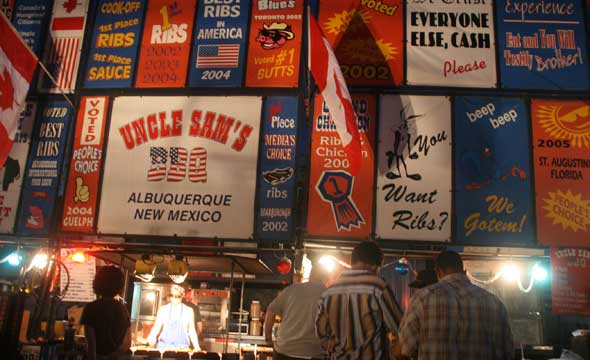 Wash all the meat down with beer, soft drinks or fresh squeezed lemonade, and of course other festival favourites like funnel cakes, fresh corn on the cob, bloomin' onions and so on feature prominently too. The live music is good for background, but not good enough to bring you out just for the show.

If you like carnival games and rides the small Midway is an enjoyable diversion, but my main goal is definitely the meat. The free entry makes it an enjoyable night for all, even those who don't appreciate the titular meat on a bone. Maybe I'll be back later in the weekend to try some of the non-meat, but something tells me I won't escape without trying a few more ribs.