The much maligned corner of Queen and Bathurst will get a bit of a facelift later this summer in the shape of Starbucks. The world's most loved and/or derided coffee chain is moving into the north east corner that was formerly a Mr. Sub.

Construction is already underway which means it won't be too long before two of the city's most ubiquitous chains - Pizza Pizza being the other one - share an intersection with the notorious Big Bop and The Meeting Place.

While any new, stable business is surely a good sign for this intersection, it remains to be seen whether the Starbucks will be welcomed into the neighbourhood. The stretch of Queen between Augusta and Palmerston is already stacked with cafes. Earlier this year Just Us! couldn't make a go of it as it failed to win customers from neighbourhood favourites like Tequila Bookworm and Java House.

Also nearby are a mix of newcomers including Niche and La Merceria as well as long time residents Artistic Grounds who attract a loyal following.

Nevertheless, I won't be expecting the same reaction that greeted the arrival of the Starbucks in Leslieville or further west at Dovercourt. 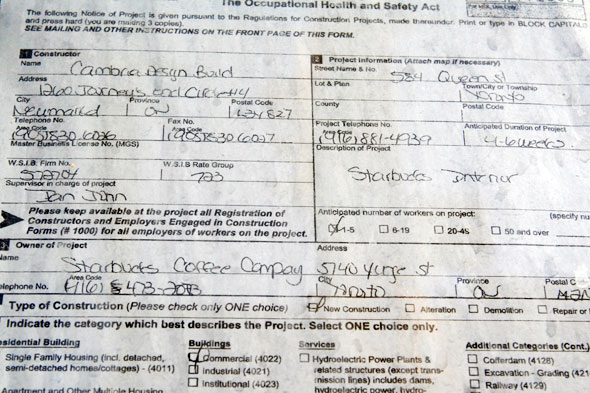