Before going to the giant Light Sabre Battle on Friday night, I attended the transformation party/tasting event at the Windsor Arms Hotel.

The launch promises "three new entertaining hot spots with an amazing tasting event unique to each new space," where the hotel "transforms traditional to contemporary."

If you've got a hole burning in your pocket and want to take a date to an upscale Yorkville area hotel/bar, this may be your ticket. It was recently ranked number one hotel in Toronto in the Readers' Choice Awards by Conde Nast Traveler.

The hotel/restaurant/bar at 18 St. Thomas Street (just south of Bloor) features the Tea Room, the twenty-two bar and PRIME, their new steak house.

Upon entry to the hotel, I'm immersed in a courtyard-like foyer with its second-floor balcony overlooking the modest sized space. For a boutique hotel, I'm surprised at the grandeur of the place, something usually afforded to much larger hotels.

Twenty-two, with its gratite-slab bar lit up ever so slightly by five pompom-like chandeliers, proves quite the transformation from its former days as a barber shop. Nestled in one corner is an even darker enclave, save for a wide-screen television blasting flashes of a the sports channel. Presumably, so you can keep an eye on the game while you've got your arm on your girl.

Amongst the chatter and clatter of wine glasses at this reception, I overhear that current guests include moviestars Drew Barrymore, and Forrest Whittaker, so I keep my eyes peeled.... 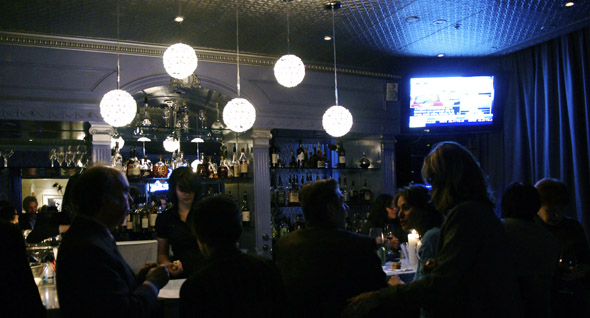 Meanwhile, in the classic "Tea Room" just off the hotel's lobby, twilight tea is being served, even though it's been dark for well over an hour. A selection of loose leaf teas, fresh scones, mini sandwiches and the like are well presented to those lucky enough to grab the few tables. 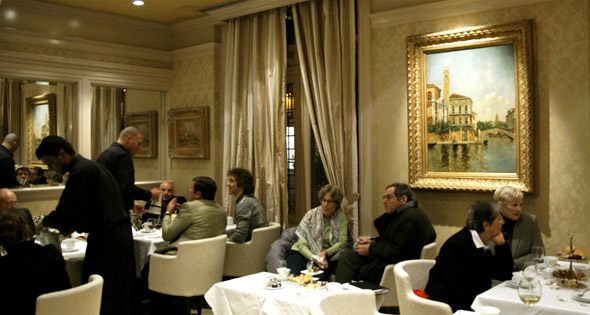 Through a doorway there is another room with purple walls lit up by a sparkling chandelier. The original 1927 fireplace was largely ignored. Pity that. 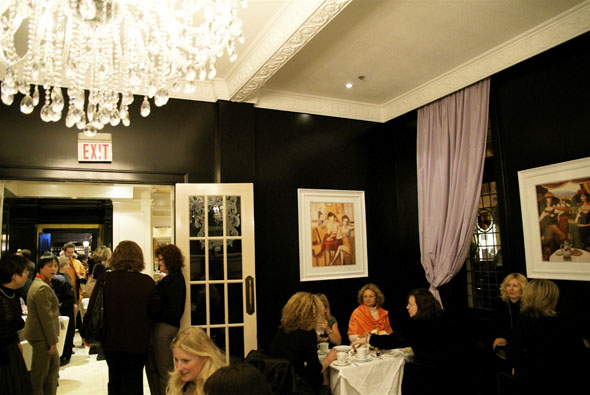 I'm invited into the kitchen to meet Executive Chef Stephen Ricci, who's been at The Windsor Arms since June. Prior to that, he worked at Prego De La Piazza on Avenue Road. He shows me trayful of arugula, breaks some off and smells it to ensure its freshness. 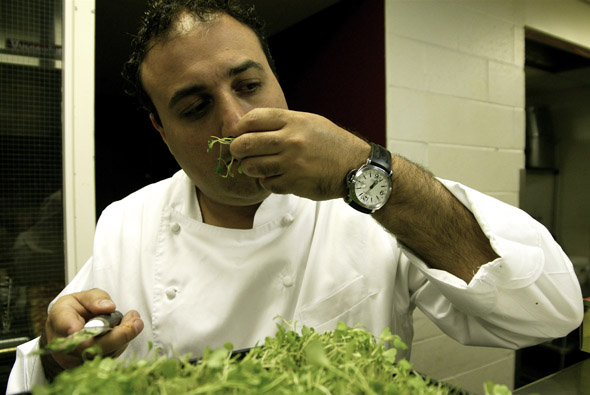 He's obviously a busy guy so I head back out to the PRIME steakhouse room, where I'm greeted by Steve Doss, the restaurant and bar manager (pictured with a glass of wine in the first photo). 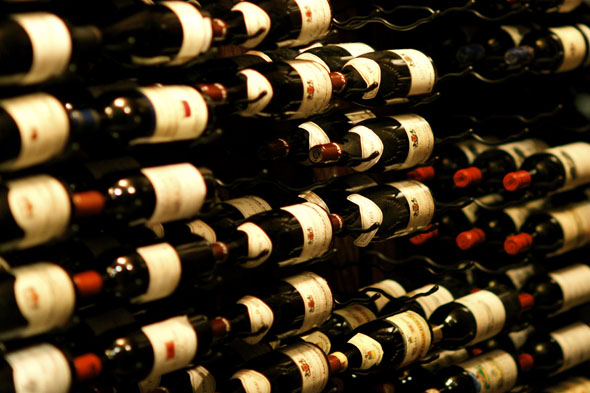 Doss shows me inside the wine cellar by the entrance. While it doesn't impress me much, the place boasts a $14,000 bottle of Chateau Mouton Rothschild, Pauillac 1918. 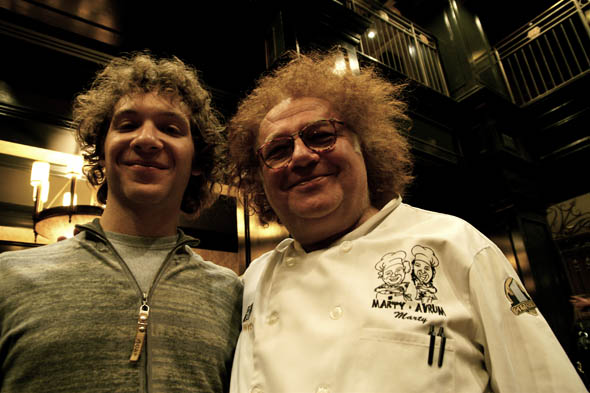 I take a seat with my new buddies, chef Marty Avrum and student Mathew Katz, whom I met in the lobby earlier on. We sit and chat and wait for the samples of steak to come our way. We're joined by two lovely ladies named Mimi and Mejra while we sip on our wine and wait some more.... 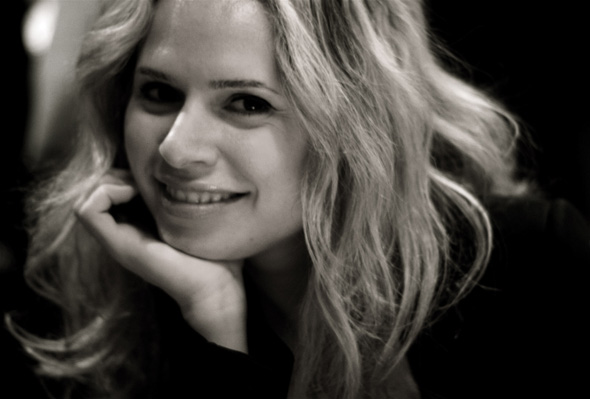 Finally a waiter brings us a long plate with half a dozen mini burgers. They make for tasty little morsels. Well done, Chef Ricci. But, by 9 p.m, we are all hoping to get more of a menu sampling than that. Perhaps that's the size of the portions here. 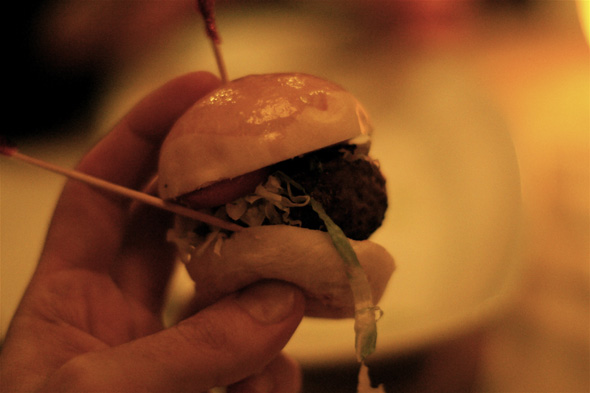 While it was all well and good to explore three distinct rooms at this fine establishment, I discovered a beautiful, spacious dining room just behind the lobby. Its tall ceiling, elegant pillars and intimate lighting would've made a much better setting for a tasting event, allowing guests to roam the other areas in between courses. 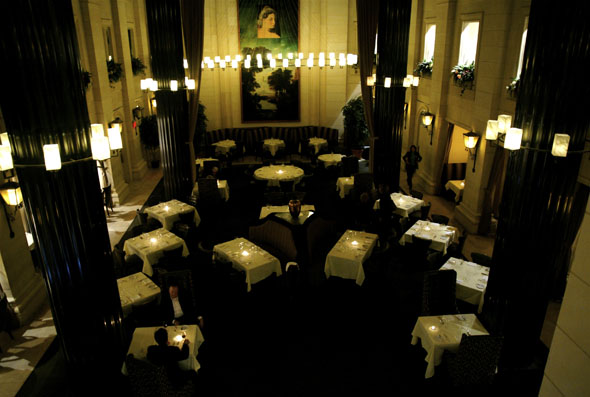 There's apparently a spa on the premises, which features private treatment rooms. Perhaps this is where Barrymore gets pampered when she comes to Toronto. With 28 newly appointed luxury suites and 24 hour butler service, it's no wonder the stars are attracted to this place.

If you were rich and famous, would you expect anything less?