Some do indeed like it hot. Not that there's much choice lately as most Torontonians find themselves crammed sweatily ass-to-elbow into these dog days like passengers on an un-air conned rush hour bus. Luckily, along for the ride is some sweet relief as our city's suddenly lousy with open air food festivals appearing like so many beads of sweat on an ice cold glass.

Now in its 10th year, this crimson-faced, nose running, 'tastes-like-burning' celebration of all things chili is set to equally delight and enflame many a tongue with a veritable heat wave of vendors hawking a host of hot sauces and spicy treats from around the world at the Red Hot Market guaranteed to have you cracking 'spicy meatball' jokes and hearing 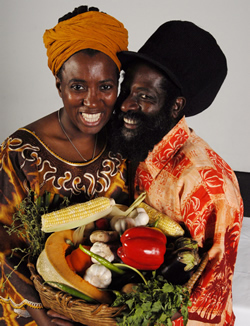 Johnny Cash trumpets during bathroom breaks for days after.

Thai, Indian, Latin Cajun, and Caribbean food are all well-represented at this year's fest featuring food from Ayurvedic Shashi's Indian Cooking, Himalayan Gourmet, Sassy Thai, Southern Accent and The Joy of Harvest. There are also nearly half a dozen hot sauce vendors on-site, including the intriguingly (and no doubt accurately) named Volcanic Ass Hot Sauce. Food demos will include an Iron Chef comp., the virtues of Kimchi, and Straight from Restaurant Mision Guadalupe in Juarez, Mexico, Chef Sergio Remolina Sanchez demo-ing his muy picante take on authentic south-of-the-south-of-the-boarder cuisine.

Looking for a little reprieve from the heat? No sweat! Saturday and Sunday will provide some interesting events including a discussion panel on the new state of Toronto street food and growing local, organic, sustainable foods (which in the spirit of the occasion will probably include some chat devoted to chilis).

Take in some of the weekend's onslaught of performances by acts such as Gypsy Rebels, Mad Plus and Afro-Reggae or the recently four enned (that's NNNN, for those playing at home) hot doc, Favela Rising about life on the rough streets of Rio (a movie for which Afro-Reggae provided the soundtrack).

As long as you don't mind it slathered in scotch-bonnet sauce, there's sure to be something for everyone's taste this weekend at Harbourfront. Just, don't forget the sunscreen, ice cream and pepto though, cos this event's sure to be a scorcher.