Mashed potatoes has been one of my favourite foods for as long as I can remember. Wherever I've lived or travelled, I've made note of where the 'good stuff' is found. Recently, making travel plans, the conversation found me raving about the mash at NYC's Empire Diner, and a friend who is new to T.O. asked me where to get something comparable right here.

That's when I realized that making them at home over the past few years has left me with no good answer to that question. (For shame!)

And so, my blogTO Best Mashed Potatoes in T.O. search began...

In the first wave of the search, I stopped into some of my favourite oldschool diners. After all, mashed potatoes are a staple of any authentic diner menu.

First stop, the Lakeview Lunch. Arriving in the evening, I placed my order only to have the waitress return to let me know they were all out. Despite the inital disappointment, that is a very good sign. It probably means they make the real deal here, 'cause flakes would be easy to 'whip up' on the spot.

I returned the next day for lunch and the potatoes were in. Pictured at the top, the mash here was, in fact, made with real potatoes and way more flavourful than it looked thanks to an infusion of garlic. Whether it was garlic butter or mashed cloves, one can't be sure, but these taters were tasty. Consistency was also really great -- not too crumbly, not too creamy. I feel like I'm doing a Goldilocks & the Three Bears re-telling here, but really, these were just right. 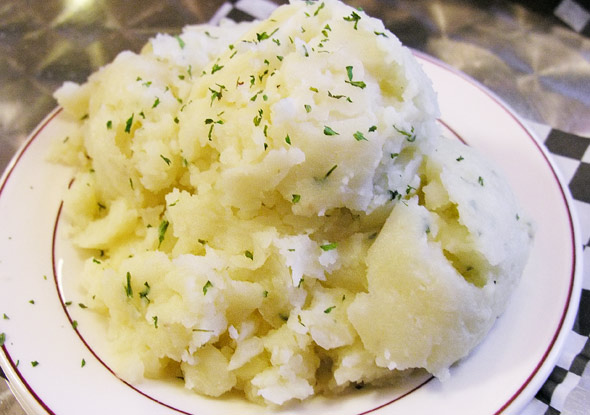 Next stop, The Church St Diner. I had high expections walking in here as I know the food is made in-house and usually quite good. The mash, however, wasn't spectacular. Pictured above, it looked amazing, piled high and sprinkled with parsley, but it was a little too crumbly and flat tasting. Maybe it was just a mediocre batch, but I wound up ordering up a side of gravy after adding salt & pepper (which, for the record, I'd recommend as it made this a much better dish).

Of course, Fran's had to be included here as it is truly the Queen of diners in Toronto. Stopping into the College St eatery, I scan the menu only to find that there are no mashed potatoes listed. Even the hot open-faced sandwiches were paired up with fries. A little bewildered (well, not really, but wtf) I asked the waitress and she said that yep, they've definitely got em. Crisis averted. 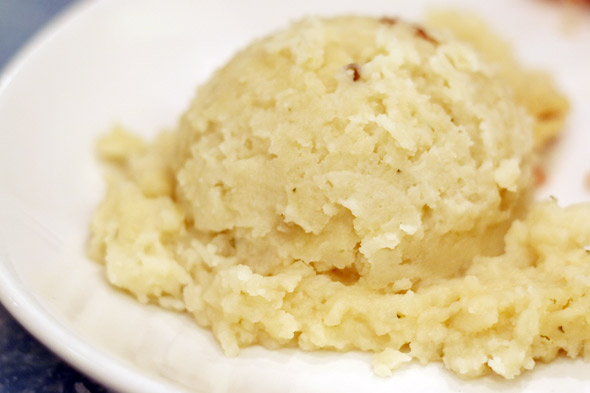 A few minutes later, I was sinking my fork in to the creamy pile of mash... but after a taste, was relunctant to do so a second time. Pictured here, they were definitely real creamy potatoes, but the creamy part was actually the problem. While adding chicken broth to your mash receipe can be a great idea, making them with cream of mushroom soup is a whole other thing. There was no mistaking it as the basis of this whole recipe. The flavour was entirely farty cream of mushroom (quite frankly), with canned mushroom bits to prove it. Bleh.

This round clearly goes to the Lakeview Lunch. I'll be back with Part 2 of the search soon.