On this weekend at the Harbourfront Centre is the annual Dim Sum Festival. Last year, I missed the actual food components completely, so this time around I made a point of making it to one of several "Dim Sum Cooking Demo" events before heading out to see the live performances.

Walking in to the Lakeside Terrace just before the 3pm demo, I found a crowded room where everyone was seated at the same level as the demo.

In other words, even standing up along the sides, I could see nothing (plenty of zoom used for the photo here). I was then kindly asked to try and find a spot at the back to make room for more people coming in. From there I could not only see nothing, but could barely make out the the soft-spoken (and soft-mic'd) chefs at the front.

I lasted minutes. The back of people's heads grew frustratingly boring and despite a keen interest in what was going on up there, I elbowed my friends and we quietly made a mad dash back out to the sun. 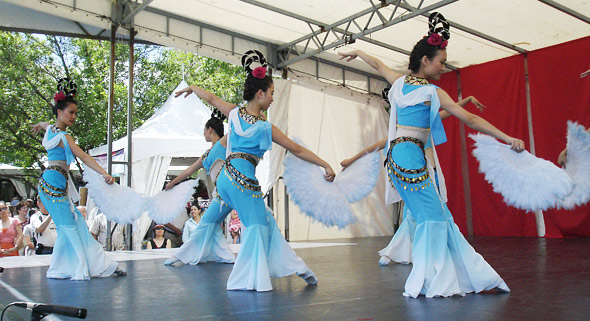 Over at the Toronto Star stage, another huge crowd had formed to watch various performances. We took a seat and caught some traditional fan dancing and the extreme martial arts of Team Ryouko (pictured at the top).

The shows were great fun and highly entertaining (highlight of the festival, really), but this was the dim sum fest, so I wanted to at least try a dumpling before the day was done.

We head over to the World Cafe and squeeze through more masses to find a dim sum booth set up by the Bright Pearl Restaurant. The food looked pretty tempting, but the line-up snaked right out the tent, so we did the only thing dim sum lovers could truly do: We got out our metropasses, hopped on the streetcar and just went out for the real deal.

For a full schedule of the day's events, visit the festival website.