'I Dream of Beer' - Uncovering the Awesomeness of GTA's Breweries

I love beer. I love a sparkling lager on a hot summer day, I love a hearty stout on a cold winter day, I love a good pale ale on just about any day... So I jumped on the opportunity to cover a tour of five local breweries organized by the Ontario Craft Brewers, an association of 29 Ontario microbreweries that brew some truly exceptional world-class beer.

I admit that my desire to cover this event was stemming partly from ulterior motives (I wanted free beer!), but the main reason I wanted to write this piece was to give the local breweries more media coverage that they so richly deserve. Unlike the big companies who spend millions on advertising bland mass-produced product, the local craft brewers have little advertising budget. Their time and money goes into doing what they are passionate about: making amazing beer. So here you are: after the jump are profiles of five local breweries. 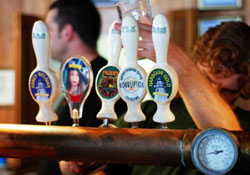 This small brewery's focus is innovation and variety. As I walk through the doors, my gaze is immediately drawn to a fridge stocked with a selection of beers brewed on site. Dave the Head Brewmaster proudly announces that the number of different beers in the fridge never dips below 12, and is usually closer to 20. Among the diverse offerings are the more traditional beers like Harbour Gold (a beautifully golden easy-to-drink lager) and Abbey Belgian (spicy and flavourful belgian-style ale), as well as some wildly unorthodox concoctions for the truly adventurous, including The Korr端ptor (whopping 15% alcohol, this beer makes a great shooter!) and the Peppermint Stout (a suprisingly refreshing dark brew).

Adjacent the brewing grounds is the Tied House Pub, featuring beer-based cuisine (the Korr端ptor Chilli was irresistible despite the intense summer heat) and a line-up of Trafalgar's taps, including a couple of cask-conditioned ales. If travelling to Oakville for a pint seems a bit too far though, you can always pick up some Trafalgar suds in any one of Toronto's Beer Stores and many LCBOs. 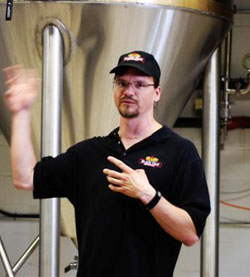 Our next stop is the Black Oak Brewery. Established in 1999, this is Oakville's newest microbrewery, but one sip of their Pale Ale will immediately convince you that they are here to stay. From ordering custom-engineered brewing equipment to using reverse osmosis filtered water, Black Oak spares no expense to ensure quality and consistency of their beer. And you know it works: taste buds don't lie. I freely and unashamedly admit that I've never had a Black Oak beer I didn't love (and I did try most of them).

The brewery's two staples are the aforementioned Black Oak Pale Ale (delightfully refreshing and hoppy yet flavourful and full of character, this beer has won numerous awards at province- and nation-wide competitions) and Black Oak Nut Brown (rich and nutty (in a good way) with a hint of hoppiness). The company also has a line-up of seasonal beers including a delicious Christmas special porter, Black Oak Nutcracker. Ken Woods, the company's president, insists they make "the best beer in the Galaxy", and, you know, after you sample a few of their beers, the improbable-sounding claim suddenly does not seem too far-fetched. Fortunately, there are quite a few places in Toronto that carry Black Oak stuff; the list is conveniently provided on the brewery's website. 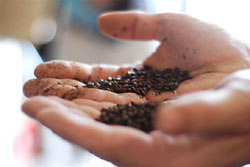 Perfection is the Name of the Game
Cameron's Brewing Company
1165 Invicta Dr., Oakville

Practically next door to Black Oak is Cameron's: another small brewery making big-tasting beer. Cameron's folks concentrate their effort on making only four beers - four beers crafted to uncompromising perfection. It all started with Cameron's Cream Ale - a fully flavoured yet clean and refreshing brew. Then there are the full-bodied Auburn Ale (delightfully complex with a great balance of malt and hops), Cameron's Lager (made with Czech hops, this beer won a bronze medal at the prestigious World Beer Cup!), and Dark266 (a dark lager that drinks much lighter than it looks).

A true local brewery, Cameron's is very community-oriented, constantly participating in festivals, tastings and fundraisers. Tomorrow (June 27) is a perfect time to get introduced to (or reminded of) their great beers - Cameron's will be holding a tasting event at the Bayview Village LCBO (2901 Bayview Ave, at Sheppard). After you sample their creations, you'll understand why Cameron's comes in 9-packs instead of 6-packs - six is not enough! (Well, actually Dark266 doesn't come in a 9-pack... But that's not to say it's a lesser beer, you'd just have to get two 6-packs, that's all). So, grab a 9-pack from LCBO or Beer Store, or get Cameron's on tap in a number of Toronto bars and restaurants including Regal Heights Bistro (1077 St. Clair West), Musa (847 Dundas Street West), The Finn (971 College Street), Globe Bistro (124 Danforth Avenue) and The Press Club (850 Dundas West). 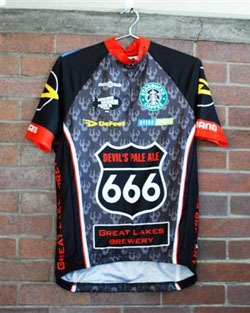 Founded in 1987, Great Lakes is Toronto's oldest craft brewery. So it's no wonder that Great Lakes has a great respect for tradition, brewing their beers using open fire and a magnificent copper tank built in Europe in the early 1900's. Their specialty is lagers: Premium Lager (very clean and smooth with lovely delicate flavours and almost no bitterness), Red Leaf Smooth Red Lager (flavourful yet still very smooth and easy-to-drink) and Black Jack Black Lager (light in taste, dark in colour, this beer is a World Beer Cup bronze medalist). However, recently the brewery tested the waters with the Devil's Pale Ale (a bold ale full of flavour and hoppy bitterness) and the success was so overwhelming, they decided to introduce more ales on the market. Their unique Orange Peel Ale (orange and honey flavour in this delectable complex brew) has been selling with record speed, and the Winter Ale is soon coming on tap at selected GTA pubs and restaurants.

One truly unique product of this brewery, however, is their amazing Ice Cream Brew. Basically, it is premium vanilla ice cream flavoured with... yes, beer! The Premium Lager, to be precise. I have to admit beer and ice cream sounds like an off-putting combination, but it works amazingly well. You really gotta try it to believe it! For now, the only permanent location that always stocks the ice cream is the brewery itself, but if you're lucky, you might catch one of their ice cream carts around town. If you eat enough of it, you might even get buzzed - the ice cream actually contains a little bit of alcohol (under 1%).

Founded in late 2002 in the Distillery District, Mill Street Brewery has been such a huge success that only two and a half years later they had to relocate their main operation to a much bigger facility in Scarborough. Mill Street's major brands are Organic Lager (crisp, clean, pilsner-style beer), Tankhouse Pale Ale (hoppy, flavourful and complex, this is one of my favourite pale ales of all times), Stock Ale (light, slightly sweet, with a touch of hop bitterness) and Coffee Porter (rich and roasty, just as a porter should be).

These four beers are now available through LCBO and the Beer Store as well as in various pubs and eateries in Toronto, but the original location still houses a brewpub that produces an astounding variety of beers exclusively for the pub's taps. From IPA to wheat bear, from stouts to light fruit ales, Mill Street does it all. The food choices match the beer selection in both variety and deliciousness (I was particularly impressed by the coconut shrimp). Combine the superb food and drink with a relaxed atmosphere - and it's a place you want to visit again... and again... and again...

Give local brewers a try! They really do make something for everyone. Don't forget that The Beer Festival is coming up in August, where you'll have a chance to sample over 200 brands of local beer. And if you love local beer, let your favourite pub know! Ask them for Ontario craft brews on tap! (And the beer ice cream... definitely bug them about the beer ice cream!)