Sometimes life is really tough. Take last Saturday, for example, when I shook a shift at my job so I could spend two and a half hours walking around Little India with a curious (and hungry) group of people interested in exploring Toronto's culinary neighbourhoods. Part of the Harbourfront Centre's Learning for Living Urban Studies courses, this was the first in a series of four that explores Little India, Kensington and Chinatown, Little Italy, and Greektown.

First, a correction: our initial post stated these tours were six hours long and were guided by Shirley Lum. The tours are actually about two-and-a-half hours long, and the guide is Umbereen Inayet, an enthusiastic and passionate "foodie," who devotes her time to the culinary arts and community development. Umbereen has done culinary programming at the Harbourfront Centre, working alongside many
Toronto and International chef's for 3 years. She has a Sociocultural Anthropology background and a Master's in Social Work. To anyone who didn't go because of the six-hour commitment: you no longer have an excuse! 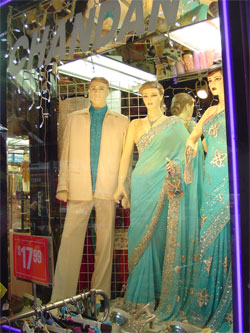 Since most restaurants in Little India are supposed to open at noon, but don't really get going until 12:30 or 1:00, we began our tour with a look at the jewelery, clothing, and other shops that line the streets of Gerrard East. Umbereen knows as much about the cultures here as she does about the food, so we were treated to lessons about the Pakistani and Indian cultures that make up the bulk of this strip.

In one of many shops that sells custom-made and imported wedding dresses and suits, we learned that the wedding dresses range from $600 - $7000, and that it can take up to 6 months to complete the elaborate hand-beaded designs on some of them. A Pakistani jewelery store (where 21 karats was the minimum) also delighted the group, which crammed itself into the tight store for a closer look.

Just when our window shopping began to lead to rumbling stomachs, we ventured in BJ Supermarket (1449 Gerrard East), where Umbereen showed us how to shop for ingredients to prepare our own Indian and Pakistani dishes. If you don't want to take the time to make your mixes from scratch, apparently Shan is the best brand for pre-made mixes. BJ Supermarket also has a wide selection of pre-packaged Naan, something I know I'll be heading back for. Everyone in the group was given a Pakistani Curry Chicken recipe, but, if I had any complaint about the tour, it was that there was no meat-less recipe for vegetarians. 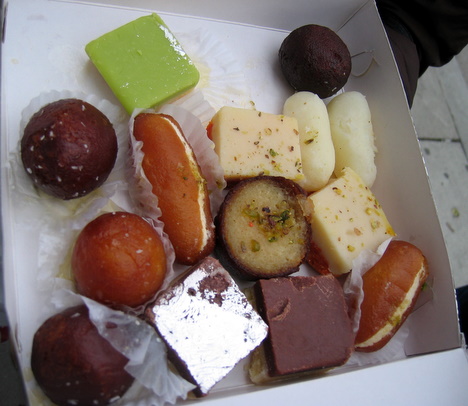 When we left the BJ Supermarket, it was time to "sweeten our mouths," so, after two boxes of assorted treats, we were ready to keep moving. One treat, jalebi, disappeared too quickly for my camera to capture, but it was a bright orange, sticky treat that reminded a few people of funnel cakes, although a little more exotic. All the treats were extremely sweet, but I took on the burden of making sure as many were finished as possible.

After spending some time in a beautiful Home Decor store, Rang, we arrived at our lunch destination, the legendary Lahore Tikka House (1365 Gerrard East). Although it's (seemingly constantly) under renovation, the restaurant's interior is beautifully decorated with a rickshaw and wedding carriage from Pakistan, as well as a colourful tent from one of the owners' brother's wedding. We were given a special treat when the group was taken into the room where the Naan is baked so we could see how the delicious bread is made. 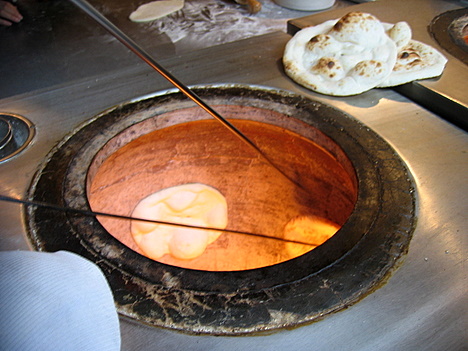 After the dough is prepared and rolled flat, they stick it to the inside of an oven, where it sits for a few minutes before it's pulled out with tongs. This, I thought, is something I will never be able to reproduce in my own kitchen. A sample of fresh Butter Til Naan made the rounds, hot, fresh, doughy, and delicious. "Til" means seed, and you can see in the picture below how loaded with sesame seeds the Naan was. 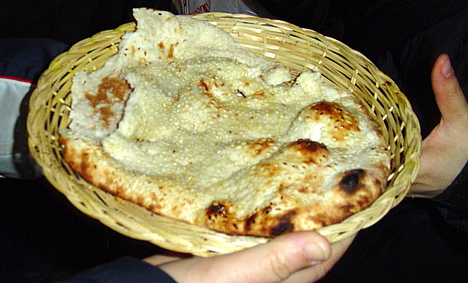 Once we sat down for our meal, we were brought a few dishes of sizzling Beef ($1.79 each) and Chicken ($1.99 each) Kababs, which disappeared almost instantly. For vegetarians, we ordered the Palak Paneer ($7.25), a spinach and cheese dish. I though it was great, but I turned to my vegetarian girlfriend, who has a more discerning palate for these kinds of dishes, for a more informed opinion. She said it was definitely above average, but still prefers the Saag Paneer at Gandhi on Queen West. 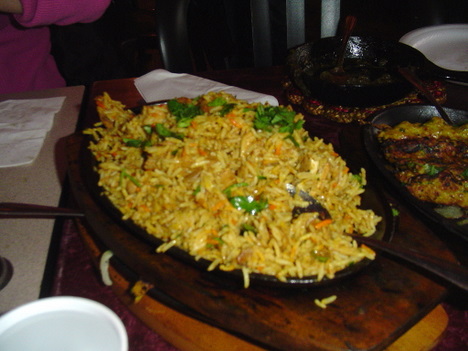 A few plates of Chicken Tikka Rice ($9.25) soon arrived, the consumption of which was pure, sweet gluttony. Huge pieces of perfectly-seasoned chicken were served on an equally huge bed of rice, which had a few of the vegetarians eating around the meat. 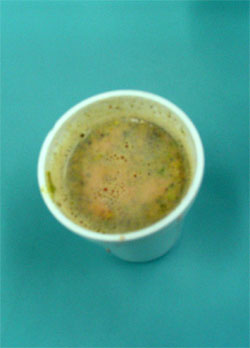 When we left, we headed for Kashmiri Tea ($2.00) at Lahore Paan Centre, (1433 Gerard East). It was a little like Chai Tea, except the pink drink had a fine layer of crushed pistachios floating in it, a perfect touch.

The tea was the final part of the tour, which was lucky for me, because by that point my stomach was starting to groan. By the time I stumbled out of the neighbourhood, I was grateful for the dark movie theatre in which I spent the rest of my evening: motion was no longer an option.

On the whole, the group seemed very satisfied with the tour, the neighbourhood, and, of course, the food. There are three more of these tours, and you can register online at the Harboufront Centre's website. Considering that we received a full lunch, a box of treats, and a knowledgeable guided tour, it was well worth the $25 fee. Only the $2 tea wasn't covered by the fee, not exactly a bank-breaking cost.

Next week . . . Kensington and Chinatown!

All images by me, except the box of sweets and the cooking Naan, taken by the faster hand of fellow culinary tourist Wing-Yee Fung.