There are two burger joints on opposite ends of the city that have been around for a long time, make really good burgers, and have gotten plenty of press. But if you're going to pit them against each other in a "best hamburger" battle, it's really no contest (and previous reviewers have gotten it wrong). One burger is very obviously superior to the other. In this episode of the comparison shopper, I present the no BS suburban showdown between the famous Johnny's Hamburgers in Scarborough versus the legendary Apache Burgers in Etobicoke. 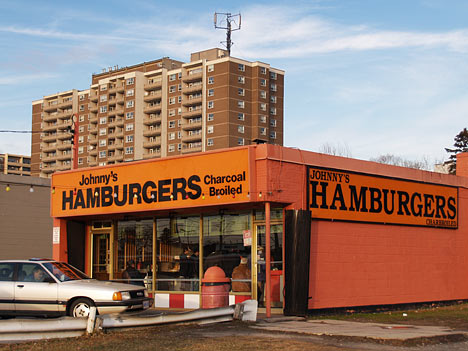 At the corner of Victoria Park and Sheppard in Toronto's East end, Johnny's Hamburgers is a landmark. It's the kind of place that your parents would have gone to as teenagers (and maybe even did), and it's still around for good reason. Endorsed by the likes of Mike Myers, the brightly painted burger joint is not meant to be a place of fine dining or ambiance. You step up the counter, order your food, take a number and wait on a bench. It takes just a few minutes and you're back on your feet and picking your toppings. They don't offer lettuce, but I was surprised by and receptive to the offering of fried onions. The onions and tomato landed on my cheeseburger. No taste-confounding condiments were used in the eating of this burger, and the meaty goodness could be accurately assessed. 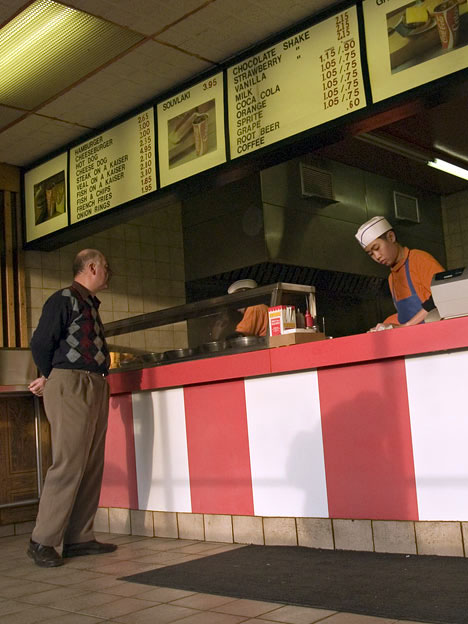 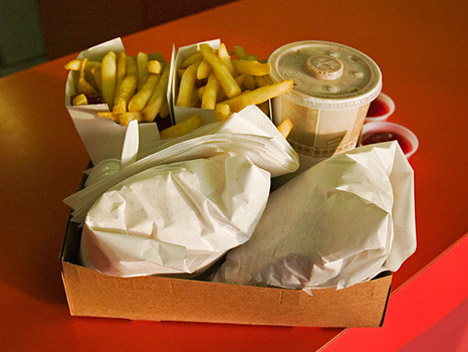 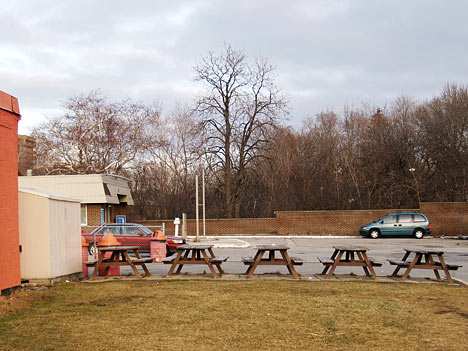 There's no indoor seating, but Johnny's features a row of picnic tables in the parking lot. Instead of freezing outdoors, I chose the wind-shelter that was the inside of my car - where I then devoured my cheeseburger and fries at my dashboard, with the windshield fogged and my belly satisfied by the warmth of delicious fast food. 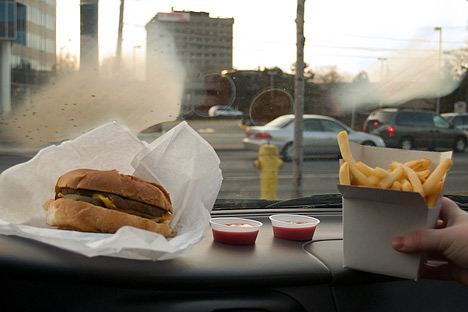 Johnny's fries were really top-notch, but this isn't a French fry battle and I won't dwell.

The Johnny's cheeseburger was really flavourful - smoky enough, but a little undercooked and a little too soft in the mouth and a little bit pallid to the eye. The fried onions were a nice compliment to the beef. The bun was fresh and not too big. The best thing about this tasty charbroiled cheeseburger was the price - at just $3 it was amazing value. Overall, Johnny's burger is phenomenal bang for your buck goodness.
------- 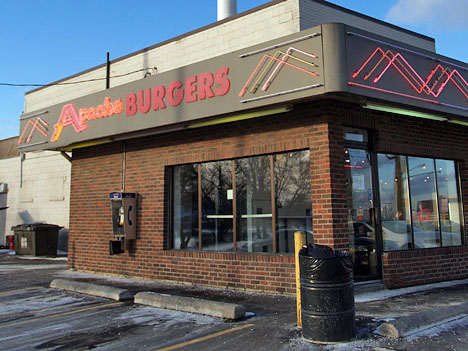 Way out west and on the other side of town, at Dundas and Kipling (a 3min walk from Kipling Station) in Etobicoke stands the legendary Apache Burgers. Often visited by then Toronto Maple Leaf hockey player Tie Domi, and once or twice even visited by the Stanley Cup itself, Apache also has it's celebrity fans. The grill is right there before you, and I like that you can see and hear the flames kiss and sizzle the burger as it's cooked. Also a landmark burger joint, Apache is a totally different experience than Johnny's.

The space is elaborately (i.e. overly) kitsched-out with 50's style stools, mosaics of Marilyn Monroe, a neon light in the shape of guitar on the ceiling and images of a native in headdress. I looked around as my cheeseburger cooked, and then had it topped with lettuce, onions, and tomatoes. 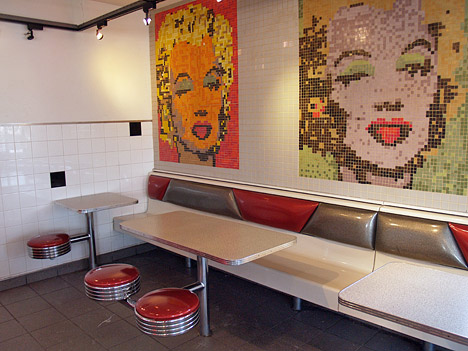 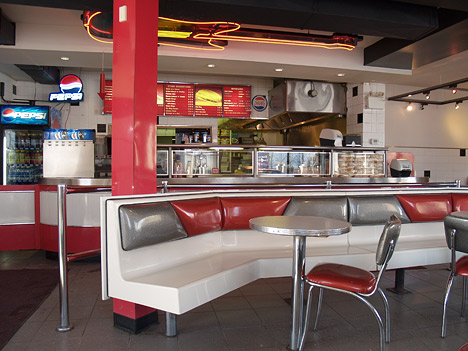 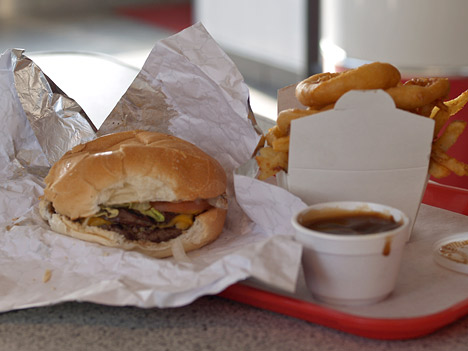 I chose to have the fry/onion ring combination as my greasy side. The fries were decent, but much greasier and droopier than Johnny's near perfect, far crispier offering. Apache's onion rings took at least a day off my life, but were totally worth it.

The Apache cheeseburger was quite simply amazing. It was cooked to perfection, a little greasy but really juicy, bursting with charbroiled flavour, and textured just like a burger should be. Peeling back the bun revealed the slightly blackened outer crust on the beef patty - the sure reason for the flavour/texture punch that makes it the winner of the suburban burger battle! I also think it's better meat and seasoned better. The $4 cheeseburger ($1 more than Johnny's) is worth that extra buck, without a doubt. And if you're really hungry the signature "Apache Burger" (a hefty double cheeseburger) is worth the $6.29 price tag.

The next time you're out in either of Toronto's east or west ends, and you're in the mood for delicious, not-at-all-nutritious diner grub, I suggest you seek out Johnny's or Apache.

Note (for the sake of transparency and blogger integrity):
I grew up in Etobicoke, and have eaten at Apache many times in the past. My preference for the Apache burger over Johnny's is in no way biased by my familiarity and love for Apache's burger or Etobicoke. My taste buds don't lie!