Plenty of Food For Thought

Last weekend, the 7th annual Planet in Focus: International Environmental Film and Video Festival opened our eyes and spoke to us on a number of important global issues. Screenings galore, workshops, and discussion panels brought environmentally conscious Torontonians and internationals together. A number of fantastic films about food provided plenty of food for thought.

In "Buffet: All You Can Eat Las Vegas" (USA, 2006) we were reminded of six degrees of separation and Kevin Bacon. If you eat at a Las Vegas buffet, be warned. The bacon that glutonous pigs (of the human variety) heap onto their plate but don't eat, along with other food waste, is blended into a brown slop, and is fed back to pigs (the farmed kind). These pigs then return to the buffet as bacon. In addition to effective juxtaposition of pigs at a trough and people at the buffet, the subjects in the film also provided viewers with a series of tips for enhancing the buffet experience and help us better understand the phenomenon that is the all-you-can-eat buffet.
- Elastic waistbands on your pants are a helpful tool for packing it in that swelling belly
- You can take out your revenge on the casino (or at least make yourself feel better) by eating your money's worth. Unlike the casino, the buffet is a sure win.
- Thicker napkins are great for wrapping up steak to take home
- Work the buffet line backwards. Why? Because the cheap, filler items are what they lay out first. Head for the guy who's cutting the meat on the spot - that's where the value is. 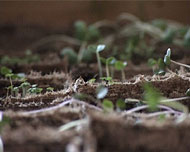 Three young Swedish women took conservation to the extreme in "Grow Your Resistance" (Sweden, 2005) by jumping into dumpsters with flashlights in hand and searching for edible but non-salable food items. Sounds gross, doesn't it? Bread just beyond expiry, cheese (it only gets better with age), and "Hey, look! There's an eggplant down there!" made for ingredients for meals that were prepared and served for free to those in need. While I may be willing to boil pasta in the same water I boiled an egg in, something about the rats and bugs in dumpsters makes this idea seem completely unsanitary and over the top. Forging a relationship with the grocery store staff and eliminating the dumpster diving step seems like a cleaner, more streamlined approach.

In "A Fallen Maple" (Canada, 2006) we learned that maple syrup, a national food and distinctly Canadian treasure, has a problem with lead levels. Older equipment made with soldered joints and materials containing lead are in essence poisoning the sweet, pure, traditional food. After volunteering to have her maple syrup lots analyzed as part of a government study on the problem, a successful 3rd generation producer was forced to shut down her business. Her old lead-tainted equipment? Sold off, and quite possibly put to use in another maple syrup operation. I think it's time the flimsy government guidelines be upgraded to law. Subsidies to help replace outdated, unsafe equipment would be a welcome part of a greater solution as well. Aunt Jemima and other attempts at copying nature's maple goodness fail miserably, and our government isn't doing much better at preserving the integrity and quality of maple syrup in Canada.

Information-packed "Ripe For Change" (USA, 2005) touched on (perhaps too many?) issues with the changes in our food and agricultural habits amongst consumer and within industry. The end of the family farm, the disconnect between the consumer and the farmer, our unprecedented dependence on fossil fuels and chemicals such as Atrazine, and the patenting of genes and associated problems (the usual suspects Monsanto and Novartis got dishonorable mention here) were among the topics that had their surfaces scratched. Alice Water's Edible Schoolyard concept is a novel idea that every school should adopt. The program has students tending to seasonal, organic gardens, and using the fruits (and vegetables) of their labor to make their school lunches. And they get school credits for it! Education initiatives that result in kids learning more about what we put into our bodies and how to produce food via sustainable practices is essential in our changing world.

Fresh on my mind after a panel discussion with David Suzuki, and a sobering Globe and Mail article from last week, "A Hell of Fishing" (Belgium, 2006) reminded me of the grave situation with our world oceans and global fish stocks. Highlighting the issue of overfishing by foreign trawlers in Sengal (along with unfair and unsustainable trade agreements with the EU), we see how Europe is exploiting African waters. We also see the detrimental effects the "free trade" is having on local communities in Yoff, Kayar, and M'bour - a new form of colonialism where economic threats have replaced traditional weapons.

After being reminded of how much knowledge we have and picking up quite a lot of new information from the films at the festival, I'm still baffled by the state of our world. How can humankind know so much, yet still allow so much environmental devastation and social injustice to continue? Hopefully film festivals like this continue to teach, spread knowledge, and have positive effects on the viewers, their communities, and the world as a whole.