A World Full of Choice at the World Cafe

Man! Walking around the World Cafe this afternoon was a nose full of Mmmmm mmmmmmm! Never have so many scents taken over my watering palate. From Asian to Mexican to Indian to Malaysian to Jamaican, I swear I walked around the Harbourfront for ages trying to decide what I was going to sink my teeth into. Suddenly, I passed the churro. A spanish doughnut. I was SO in but that was to be dessert.

While following my nose, I came across some young aspiring chefs creating their own chef's hats! I was totally tempted to sit down and create my own, but alas, my stomach was calling me! I passed by jerk chicken, tomales, samosas--heck there was "ONE LOVE" corn! Finally my sights (and smells) were settled on Malaysian murtabak. 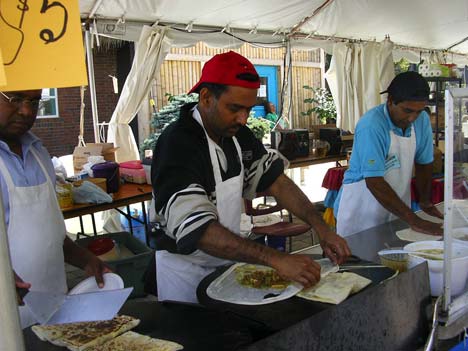 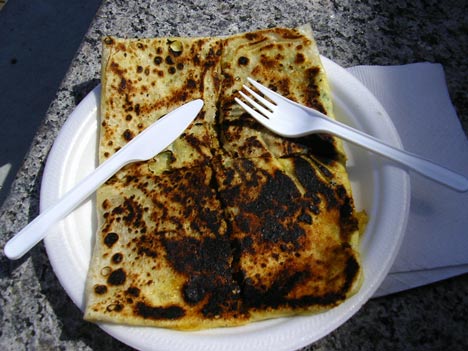 I watched the chef spin the dough into a thin pancake and then throw it on the grill. A mix of ground beef, peas, onion and spices were placed on top and then the whole thing was folded into a rectangle.

After walking around the International Market for hours, I was more than ready to feast on this fare. No disappointment whatsoever. Right off the grill, it was warm with a melt in your mouth pastry shell. I was in my international element. As much as I was enjoying the murtabak, I couldn't stop thinking about, "The Churro."

As expected, the spanish doughnut was like a party in my mouth. You see, i've been off the sugar for a little while now and I've been jonsing for some sweet sweet goodness like this. Deep fried warm dough filled with caramel goo and topped with icing sugar. I'm telling you, you need this. It's one of those dishes that when you put it in your mouth, you take a deep sigh of relief. It was exactly what I was looking for.

There were so many different kinds of food that I wanted to try but I didn't want to gorge myself. I definitely left the World Cafe satisfied, and I'm thinking about going back for more. Afterall, it's still going to be there for the next couple of weekends.