O.K., so Stylegarage looks like it was once a garage. At 1500 square feet, it's a pretty damned big garage, but you could imagine some sort of car collector parking a beemer or two in here. Instead, someone who loves steel moved in, and they decided to make a furniture headspace.

I got the feeling that the target market is the urban 30-something condo-set who like to go up north once in a while, and are looking to reconnect with nature. Not that I've seen a lot of brushed or rolled steel in Algonquin, but you get the idea.

The cottagey feeling is assisted by the moose head on the wall. The eyes seem to follow you as you walk around. It's not a real moose head; it's carved out of wood. But it's freakishly lifelike. The other side sports a deer head. It's only vaguely reassuring that they're not actual heads. But I guess I'm just somewhat squeamish. 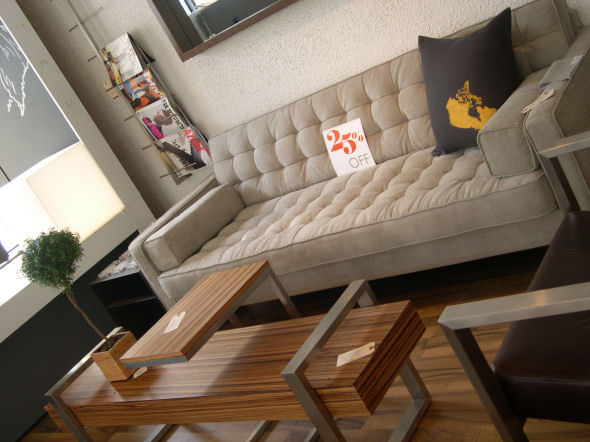 There isn't a lot of knickknackery going on in Stylegarage. You won't find wall after wall of easy-sale trinkets. In fact, it's pretty darned sparse when it comes to the after sale. The owners focus almost entirely on furniture design, and ignore anything that isn't on this agenda. It means you don't have to wade through a ton of stuff to imagine what your room would look like with this chair or that table.

One of the only design add-ons is a series of Canada pillows. They've got a cute off-centre map of Canada. Actually, they're pretty damned tasteful, perhaps the only time I can get away with saying this for errant bits of Canadiana. The hockey stick on the wall might have gone over the top just a bit, though.

I was a bit disappointed to learn that the moose head is actually made in California, and not in, say, Timmins. But at least it's a moose. It could be Canadian, eh?

They really don't like "frivolous over-design". The guy in the store told me that the 4 partners like "honest materials".

It's hard not to see this as soon as you walk in. But the difference in here is that they like to mix materials in a serious way. There's a good amount of wood in here, most of it bound into some sort of steel frame. But unlike what's found in most design shops, the mix is carried off pretty well, with a sense for what nature might have done if she had a tool shop and a metal press.

Throw in some leather and a few tough fabrics, and you've got the making of a modern Canadian resort-lounge. 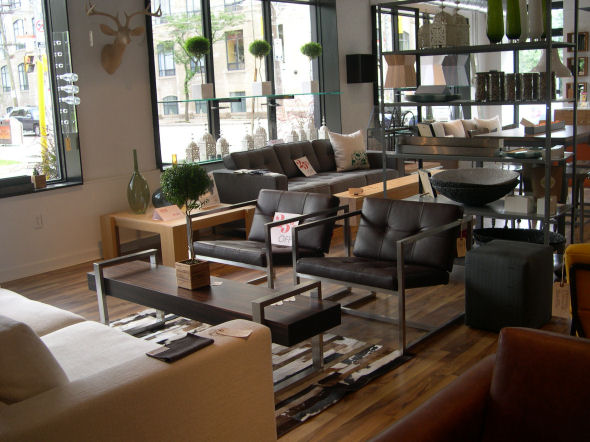 This is by and large a custom design outfit. They design everything in-house, and they want to do custom work. They like doing custom work. But custom work has to fall in to one of their preset design templates. The designs can be tweaked, nipped and tucked, but in general they don't like it when customers stray too far off the mark. Asking seriously tough questions drives the price up pretty fast.

A standard sofa will cost about $1950. But a customized sofa with a few options starts to set you back about $2700, give or take a bit, and that's before tax.

Sizes are pretty much adjustable, but the basic design sensibility is not. If you like something, and you've got some weirdly configured or really small space, you can be sure what they make for you will at least get into the elevator. Custom pieces take anywhere from 8-12 weeks to deliver, depending on how busy they are. Their sofas are made by Gus, and they seem to be the only Toronto dealer for this line of upholstery.

The good news is that you don't have to worry about their suppliers for most of the tables that they sell. They are the suppliers. They have a workshop.

Stop in if you've got an interest in steel and wood. If nothing appeals, you can at least take home a pillow. We can all use a little piece of Canada, eh? 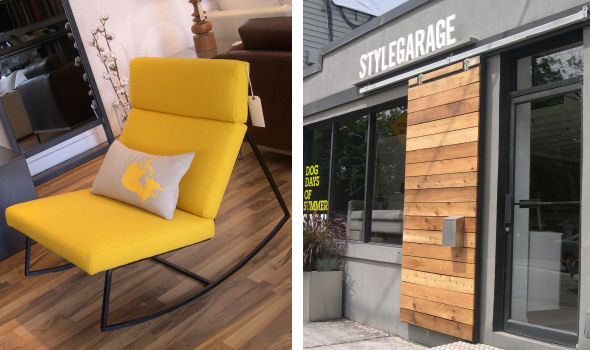