T Cafe bit the dust rather quietly last week, so much so, in fact, that I've had difficulty pinpointing the exact date of its closure (I think it was on the 1st of September). In rather speedy fashion, the space it formerly occupied is already being prepped for the arrival of Menchie's, a frozen yogurt joint, which, judging from its website, has its sights set on world domination.

The closure doesn't come as too much of surprise. Not only did the cafe look chronically under-visited, but it didn't exactly receive rave reviews upon opening. Our review cited its "split personality" and "lack of a clear direction" as warning signs, while the Star's Corey Mintz was even less impressed. "Perhaps the food at T cafe would be better if it were a Starbucks. I would rather eat one of its prepackaged ham sandwiches than another meal here," he wrote in May of last year.

The reference to Starbucks, of course, is fitting -- given that T Cafe took over the space at the southwest corner of Bloor and Borden from Dooney's, which was the site of quite the battle in 1995/96 when Starbucks took aim at opening a location there. Although Dooney's ownership never seemed to be quite as passionate as its neighbourhood supporters, Starbucks eventually backed off, opening across the street instead. 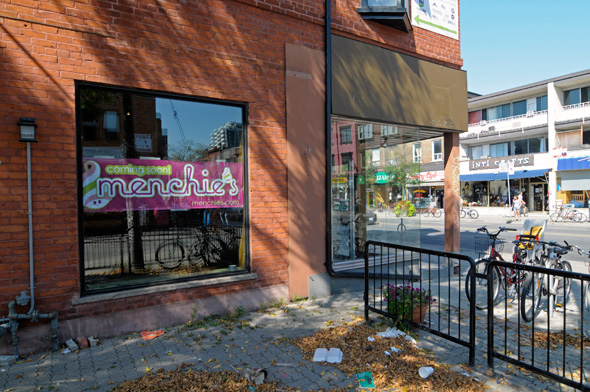 While Dooney's chugged on quite well for many years after that, the changing nature of the Annex strip eventually hurt business, leading original owner Graziano Marchese to sell the cafe in 2008. Insofar as the neither the new ownership nor the folks behind T Cafe could recreate what so many loved about the place, this was probably a smart move.

So, roughly fifteen years later, the location is finally going corporate. Menchie's has about 50 locations open in the U.S. and is growing at a rapid rate. And with the strip of Bloor between Bathurst and Spadina featuring more and more chains, it'll likely fit right in. Still, I'm sure Jane Jacobs is turning in her grave.