On the same day the city's beloved Pages Books & Magazines closed, an indie in the east end made its last sale. Yesterday, fans of TYPE Books on the Danforth were greeted with papered windows and a sign on the front door announcing its 1+ year run in the neighbourhood had ended.

Sadly, it's not that surprising a development. While the first two TYPE stores on Queen West and Spadina seem to get a steady stream of visitors, the third branch on the Danforth was often empty. I last bought a book there on December 24th (usually a busy day for last minute shoppers) and I was the only one in the store for about 20 minutes.

The original TYPE on Queen still has many loyal customers, myself included. The store works because it offers a small but well curated selection. The one on the Danforth seemed about half the size - too small really. They often didn't carry some of the books I was looking for, or didn't carry a wide enough selection in most topic areas.

It probably didn't help that Re:Reading, a used bookstore, opened across the street earlier this year. Combined with the Book City in the Carrot Common three book sellers between Broadview and Pape was likely at least one too many. 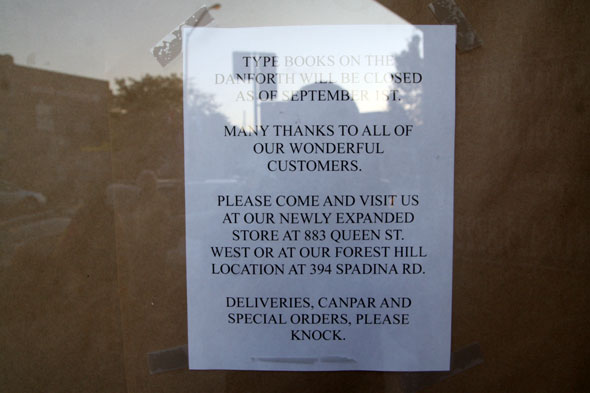