The sad, but perhaps inevitable, news came today that Pages, one of Toronto's most-loved bookstores, will indeed be closing its doors on August 31st. Efforts by owner Marc Glassman to maintain the viability of his business amid "skyrocketing rents" on Queen West have ultimately hit a brick wall in the form of lease-cycle that's finally run its course.

As previously reported, a six month extension worked out with Pinedale Properties in February was occasion for cautious hope, but the discrepancy between what Glassman can afford to pay and what Pinedale believes it can charge is simply too wide. A fixture for artists, intellectuals and book lovers coming on 30 years, the store will be sorely missed.

I caught up with Marc by phone earlier today to commiserate and ask about what he hopes the future might hold for him and his store.

Although he's already been actively searching for a new location to house Pages for about two years now, I was curious to know how long he's inclined to keep searching should he not find an appropriate space before the August 31st closing date.

Hesitant to give me a drop-dead date on a search, Marc instead explained that beyond just finding a new location, it's become both necessary and desirable to rethink the store from the ground up. In the age of the Kindle and eBooks, it's his belief that the independent bookstore will have a better chance to thrive if it's operated as something of a split between a retail venture and an event-space. (Perhaps something like powerHouse Books?) 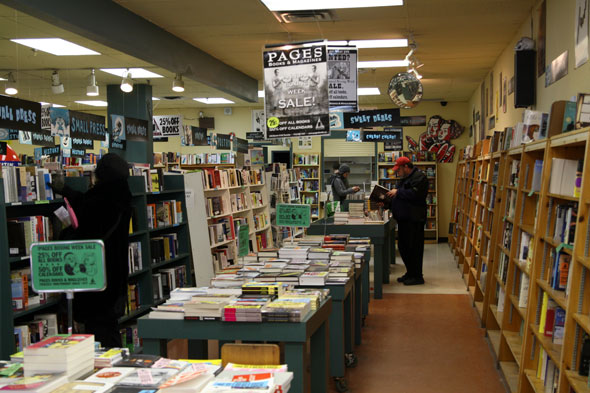 This seems logical to me. While the importance of the materiality of books will certainly continue to fade, it's unlikely to completely disappear. There's plenty out there who'll continue to treasure the beauty of the book as an object. Indeed, I'd count myself one of these people. But to rely solely on this form of business is, given the current situation at Pages, hardly prudent.

But, as is the case with so many of the independent booksellers that I chat with, it's about more than prudence and mere feasibility for Marc. Having already founded the successful This is Not a Reading Series and participated widely in the city's arts and culture scene for decades, the possibility of building on this work by operating an event-space devoted to the arts is actually quite tantalizing.

That's not to say, however, that it will be easy to come across a suitable location. For all his excitement, Marc believes the process is as unpredictable as falling in love: you may search and search, even become completely disillusioned, but then all of a sudden the right person comes along out of the blue. Maybe that's an overly romantic analogy, but it's certainly apt. When he found the Queen St. space, he knew right away it was "the one." As a booklover, I hope for both Marc's and my own sake that lightening strikes twice. And, of course, that the rent on independent bookstores miraculously never increases! 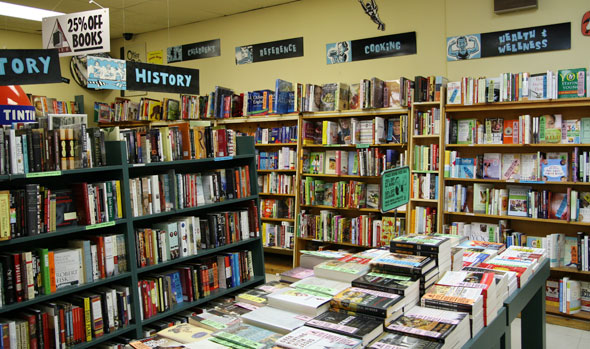 When asked what will become of the store's stock when it closes, Marc tells me that he hopes that his reputation with publishers may allow him to sell back many of the books that remain (returning unsold inventory is industry practice). But, of course, there will also be a sale at some point.

Though it might seem akin to cheering at a funeral, I'm going to make sure to head down to take advantage of this. In addition to joining the Save Pages Facebook Group, and showing verbal support, getting into the current store and making a few purchases seems to me a great way to encourage Marc that a new venture might meet a better fate.

As we wrapped up our conversation, I asked Marc about his fondest memories of the Queen St. location. Not surprisingly, there were too many to name. But of the few that he recounted to me, I think one in particular sticks out. Many years ago, celebrated Canadian filmmaker Atom Egoyan's wife, Arsinee Khanjian, was in the store looking to buy a gift for her husband and asked Marc to recommend something. What book did he suggest? None other than Russell Banks' The Sweet Hereafter, a novel which Egoyan eventually adapted for the screen to much critical acclaim.

So needless to say, with the demise of this incarnation of Pages, we lose something more than just a bookstore. We lose a cultural institution.