Simply Zoup in the Deadpool

After just a year and a half, Simply Zoup enters the deadpool. A letter in their window reads,

"To all SIMPLY ZOUP patrons and friends,

With bit of sadness & regrets we have to cease operation. On behalf of the staff's [sic] and management, we would like to thank all who have supported us over the last 18 months.

We are proud and hold our heads high.

The immediate future is unclear, but SIMPLY ZOUP could possibly rise again."

I never went in because I'm not one to buy soup, but sometimes smelled soup wafting out the door. Small with no seating area, it served up sandwiches, salads, and a large changing variety of soups.

Victim of the recession? Maybe. I just hope that they don't replace it with yet another sushi restaurant, shwarma/falafel joint, cheap shoe store or head shop. The landlord of a building a few blocks south on Yonge at Gloucester where a UPS store stood until recently had the right idea: Wanda's Belgian Waffles is opening their second Toronto location there (the first opened last year on Yonge just north of Dundas next to the HMV).

What would you like to see in that space? 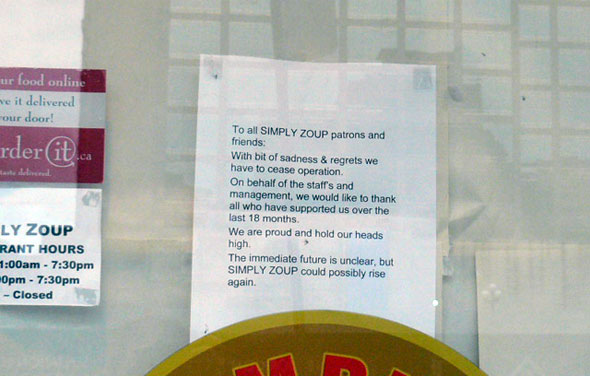 Writing and photos by Andrea Toole