If the Renaissance Cafe was human, it'd be a guy. He's awkward and geeky smart, knows his Waits albums in chronological order. This guy would play guitar. He'd like his craft breweries. Women would flirt with him, but he wouldn't pay them too much attention. He's there for the music, maybe to see a friend's band play. Or sometimes the poetry. Or perhaps just jonesing for some nachos with very generous portions of cheese.

So it'll be sad to see this guy leave our presence for good. Renaissance Cafe, found at 1938 Danforth east of Woodbine, is entering the deadpool. After this Sunday, east-end folk songwriters need to find a new stage. There'll be no more Tinfoil Hat parties (Funkless lives on, of course). And Toronto's east end will have lost a jewel of a venue.

Its final night - or Final Pour, as the insiders call it - is happening tomorrow (Saturday night) at 8PM. Jeff Hale and Ryan Clark. Multi-disciplinary artists will end the Renaissance's run with a grand performance that should go late into last call. 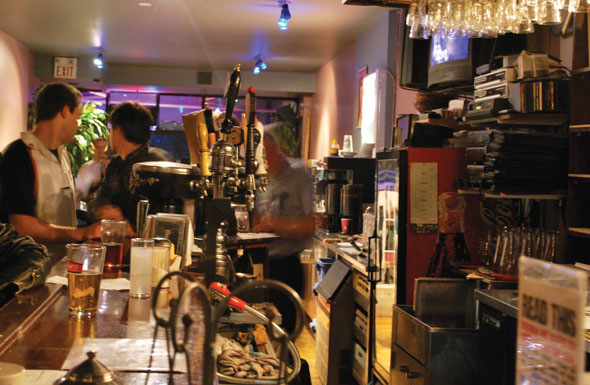 Owner Randal Clarke embodies the Renaissance: he's kind of awkward, extremely friendly, soft-spoken and humble. He used to be a teacher, and he actually looks like a teacher, if that makes sense. Clark will listen instead of talk your beers off. It's what makes him approachable, especially when the owner is slinging your drinks for you, heating up nachos or pita pizzas, working the sound board.

Clark said he doesn't have time for the venue anymore. He's given up the biz he started eight years ago, and is now courting offers from people who envision it to be something else than its roots.

And the Renaissance is rooted in live performances. Folk music, noise bands, comedy nights, spoken word jams, Bukowski tribute nights...the 'Sance wasn't interested in catering to one crowd. It was home to the Coffeehouse arts collective for several years before that group disbanded. And its Tuesday open stage night attracted a variety of performers, some strumming guitars, some popping off slam poems, some just crooning Cash tunes.

I went to the Renaissance last week to see the end of a spoken word series called Cryptic Chatter. On the first Friday of the month, Renaissance gave its stage to this quirky collective of spoken word poets. The mood was always upbeat. Now, though, it was a bittersweet Friday night, where the audience was both mourning and appreciating a poetry series and a loveable venue.

Host Valentino Assenza was chipper, as he always is. It was refreshing to see a host frequently thank the stage. He inspired us to give Clark a standing ovation for doing what he's done with the Renaissance, for giving the east end an eclectic performance venue. I saw a tear well up in Clark's eye. I could be wrong. It could've been sweat; the 'Sance is always boiling.

That's the funny thing about this venue - it's not a great venue, structurally. The sight-lines can be brutal because the venue is narrow and long. Sit up front and you're golden, but standing at the back behind the bar...you're better off watching the TV sets Clark mounts, displaying the action on stage. Clark records each performance and gives a free DVD copy to the artist.

It's those little quirks that gave the 'Sance its charm. Just like the "poetry line" strung across its east wall (essentially a string clothespinning papers of poems). Like having a library of CDs and books for sale. Bands and poets donate merch to the venue, maybe a way of saying thanks, maybe a way to leave a mark.

Clark said the Renaissance's space is available for $2,500 a month to the right bidder. He's not going to give the space up to just any renter; he'll be vetting each proposal because Clark wants the spirit of Renaissance to live on.

I feel sorry for all the arts lovers of Toronto who never set foot in the Renaissance. It was comfort food in a city filled with so many generic spaces. And many of the Renaissance fans won't forget the good times they've enjoyed at this eclectic joint. 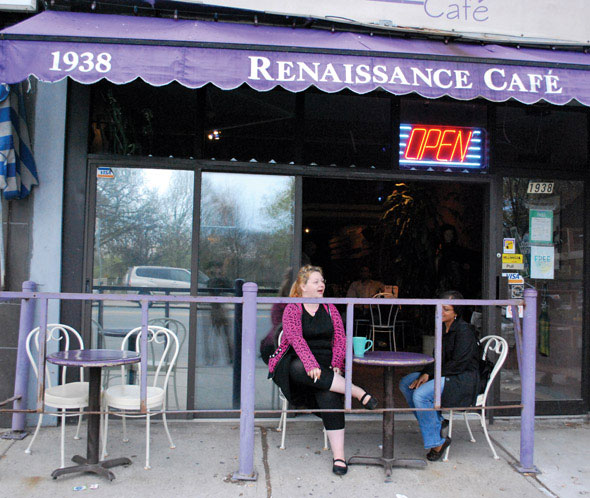