Years ago, before there was such a think as vegan restaurants in Toronto, Pulp Kitchen was one of my faves. It was my go to brunch spot in Leslieville before there, uh, was a Leslieville. But over the years, my visits started to decline. Better options surfaced elsewhere, and it was always a struggle to convince by non-vegan friends to sacrifice a brunch here as their breakfasty options were very limited.

Now, Pulp Kitchen is no more. The sign has come down, newspaper covers the windows, but there is a sign on the door hinting that a new brunch spot will be opening here soon. Victoria's Lady Marmalade will be spreading their wings east, and hopefully bringing their amazing looking brunch menu with them that includes such offerings as Good Morning Poutine and Cheddar and Spinach Waffles. Now that's hangover food. 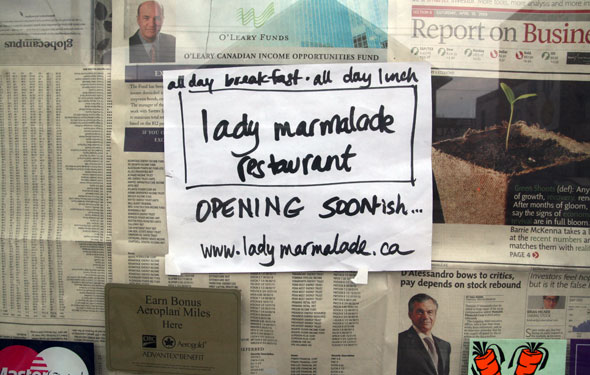