H.I.T Fitness Muscles Into the Deadpool

H.I.T Fitness, the small chain of local fitness centres that promised a revolutionary style of workout, is no longer. In a message posted to their web site, management announced that tough economic conditions have forced them to cease operations.

Operating a profitable fitness club is a tough business proposition at the best of times. And in a city deluged with price cutting mega-chains like Goodlife and Extreme Fitness, smaller clubs need to really have their game-on in order to stand out from the crowd. H.I.T Fitness, only a handful of years old, may never have really had a chance.

Their problems likely started with their concept. Their big bet was that they could lure the kind of people that hate working out at traditional gyms and fitness clubs with a message of more gain for less pain. Specifically, they promised:

They weren't without their fans. They secured the final spot in our list of the Best Fitness Clubs in Toronto. But many may not have been convinced. In a comment on the post, "pb on" wrote H.I.T. seems more than a bit quackish... "a 90 minute workout in just 4 minutes?"

By all indications management was still bullish as recently as last year. In June, Director of Operations Julie O'Brien promised new club openings including an expansion to Montreal.

But now the vultures are out and circling the bankruptcy trustee to try to get a deal. In the last two days, two commenters have inquired here about purchasing the equipment.

Here's the full text of the Deadpool announcement posted to their web site: 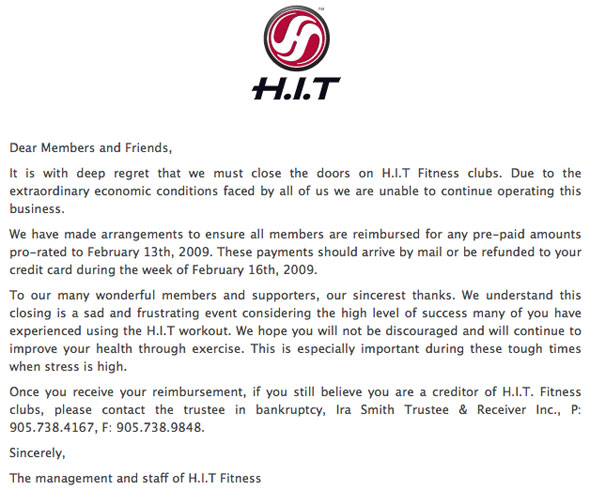