Dooney's into the Deadpool?

I use tea as a reference because it's the only thing I've ever ordered there. I've lived two blocks away from Dooney's for most of my life but I've never really frequented the place (it's out of my family's price range...we were a 'Swiss Chalet' kind of crowd.)

Still, it was shocking to walk by the cafe this morning and see the windows boarded up with newspaper. I took a closer look and found a messy pen written sign on the door that read "Closed for Renos".

I'd like to believe them, but I've been told they had a massive blowout sale at the beginning of the week. Dubbed a 'content' sale, they sold off kitchen utensils, chairs, decorations...you name it.

Of course Dooney's has survived adversity before; there's a famous story about Starbucks attempting to take over the lease of the cafe and the neighbourhood rallying around the business. Will it happen again?

Maybe the recession hasn't been kind to Dooney's; people are holding onto their money more than ever and the Annex is littered with broke college students and artist types anyway.

Only time will tell if their 'reno' will ever be finished... 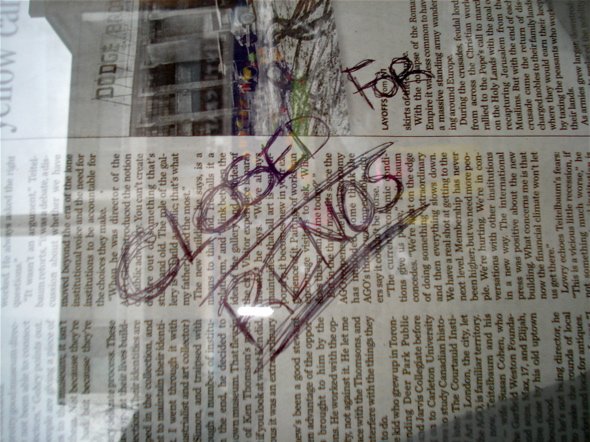