Just to make things clear, this isn't exactly breaking news for the Dead Pool, as this closure occurred over two weeks ago and to a franchise with other locations, but here goes! It seems that after a disagreement with landlords over issues such as the overall cleanliness of the market and, oh, heating, the St. Patrick's Market location of Sandwich Box, has been forced to close up shop. Here's the notice they left for their customers: 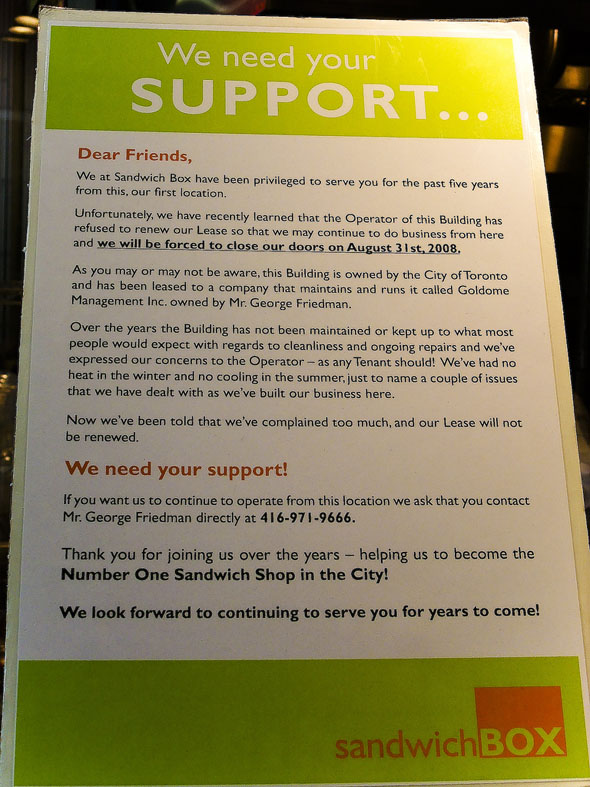 Well it's no surprise that the market really isn't what it used to be, evident by the fact that it's almost been a year since Ben & Jerry's abandoned one of the best locations in the market, and hasn't been emptied or cleaned since. It's just disappointing that the city would allow a landlord to let a historical landmark of old Toronto (the St. Patrick's Market was first established in 1912) get so decrepit. So while it's too late to offer support to Sandwich Box since they moved on, maybe the next step is to bring up this issue to City Councillor Adam Vaughn to sort out this landlord, before what used to be one of the tastiest food courts in the city turns into little more than a dead zone.

If you're still craving a custom-crafted sandwich at one of your favourite sandwich places in the city, Sandwich Box has 3 other locations to serve you, one at 67 Richmond Street West (west of Bay), 37 Eglinton Avenue East (east of Yonge) or their new location in the Royal Bank Plaza at Bay and Front.