The Shore Leave can be found on an up-and-coming area on Danforth East between Coxwell and Woodbine.

Along with Shameful Tiki Room in Parkdale, it's part of a revival of tiki bar culture in the city, making for a great option when you crave a tropical getaway but can't actually get away.

Co-owners Zach Littlejohn and Julian Altrows previously worked as bartenders at The Only further west on the Danforth and used to throw tiki-themed parties there. 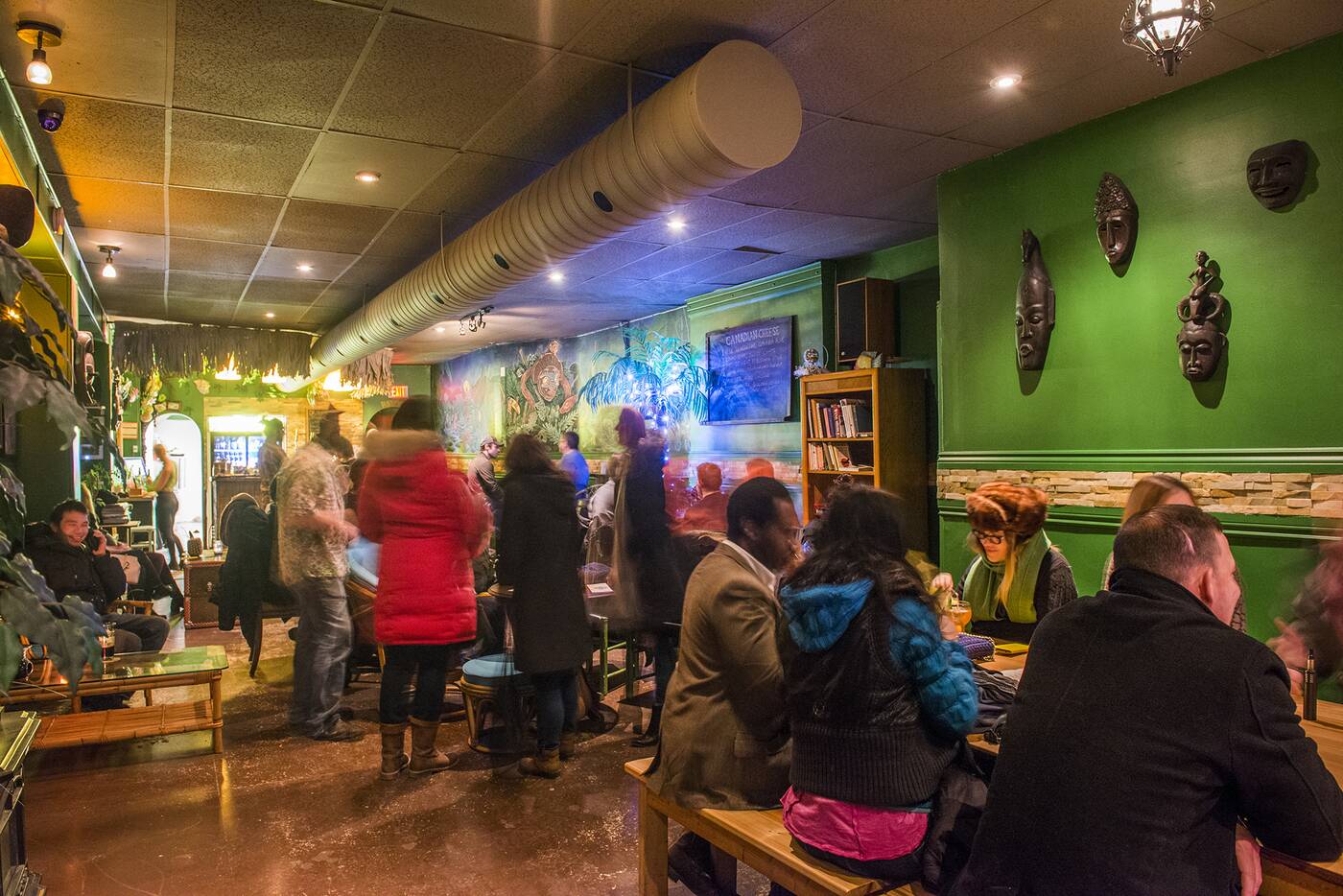 It's chock-full of random treasures; there's a shelf with books and board games, a mishmash of tables (including a few big wooden barrels), a palm tree, a jungle mural and fake flora around the bar.

It's all sourced from thrift stores and their parents' basements. "I have a new appreciation for hoarders," says Altrows. 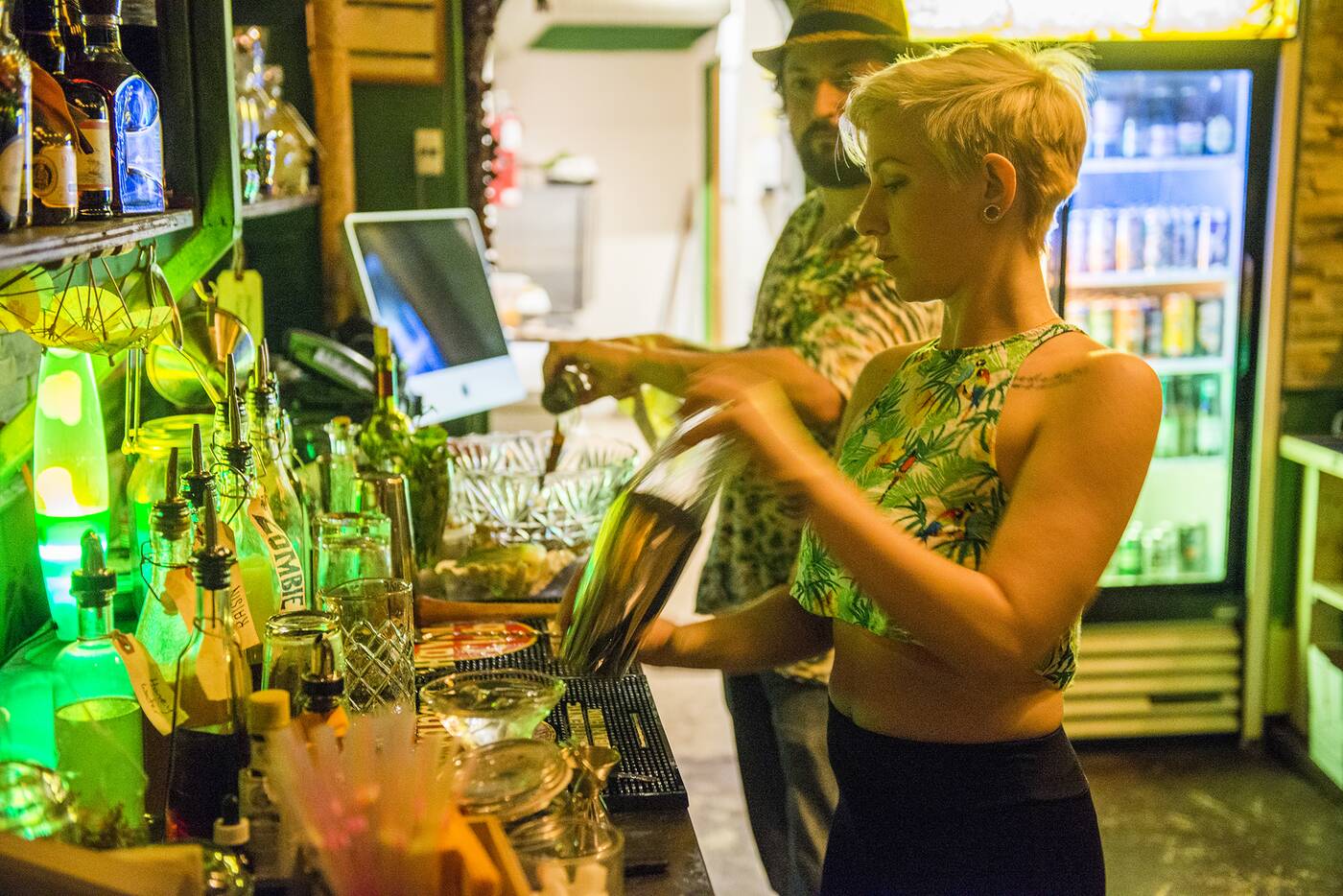 Staff wear Hawaiian shirts and work quickly to fill drink orders. There are a half-dozen craft draught beers or ciders ($7 each) - with tiki tap handles designed and hand-carved by Altrows - along with more offerings in bottles and tall cans, plus wines by the glass ($6-8).

However, the focus here is clearly on the house-made drinks. The Shore Leave is their creative outlet for tiki-inspired cocktail ideas; they even make their own bitters here.

The menu is split into martini, classic and made-in-house drinks, with the additional option of ordering a "Jungle Juice" punch bowl ($65) to split with friends. 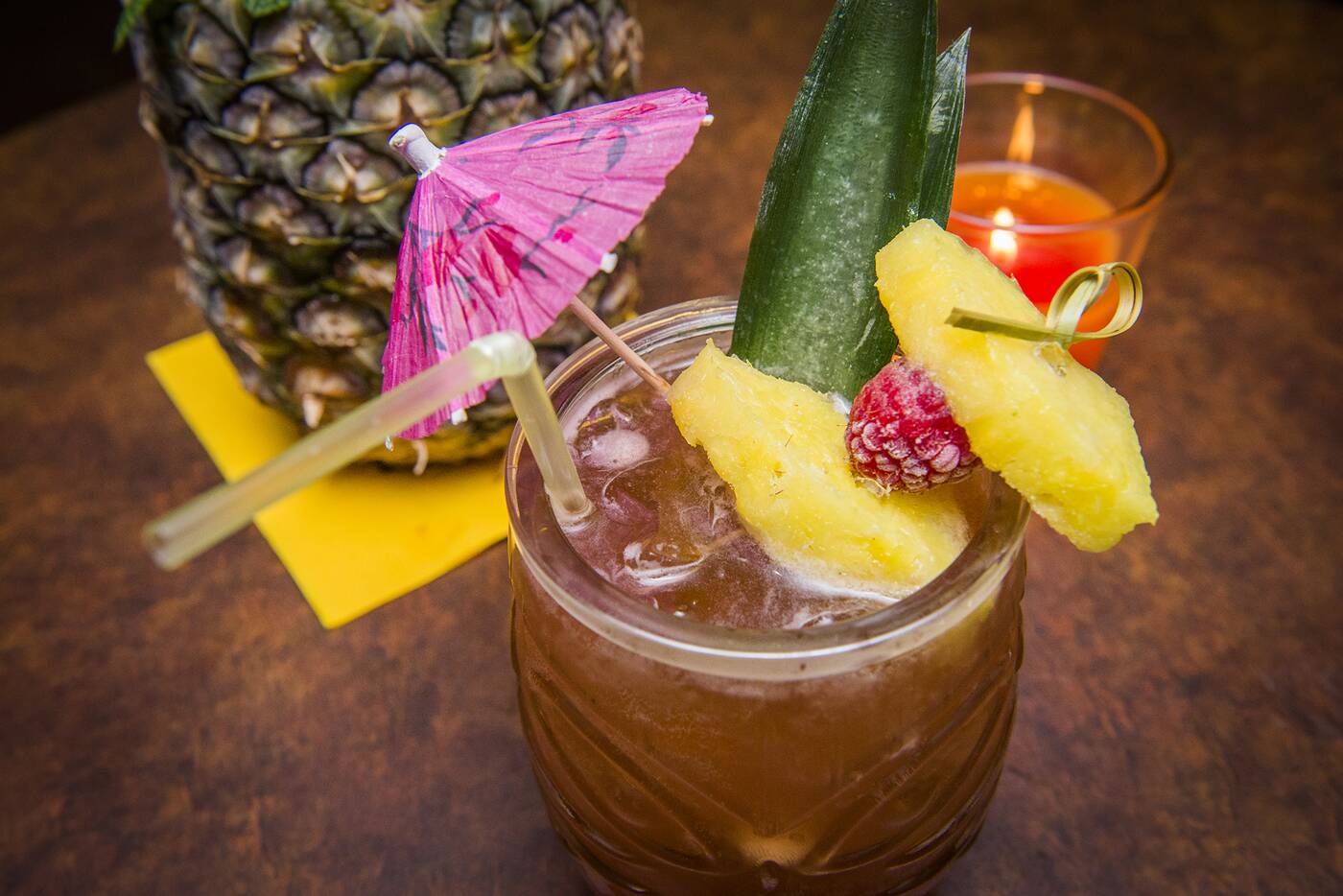 My friend tries a Maiden Slayer ($14), a fizzy gin-based cocktail that also contains house-made strawberry hibiscus, aka-kava (Tahitian-style bitters) and honey water topped with West Avenue Cherriosity cider. It's served in a glass with a tiki face on it. 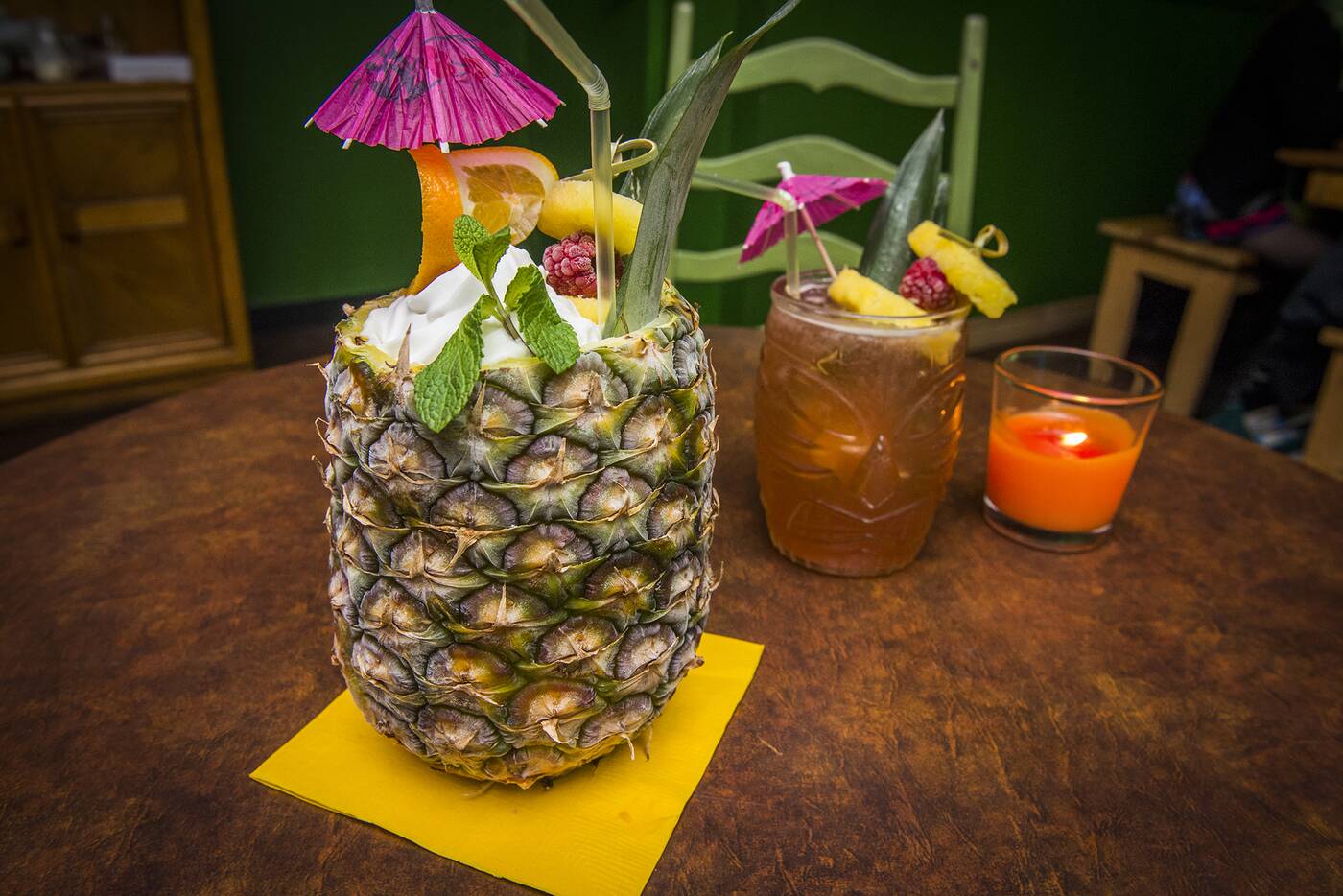 As for myself, I gravitate towards the Kon Tiki, pretty much because it's served in a frozen pineapple ($18). A combo of Zombie rum, passion-pineapple, orgeat, absinthe, agave and coconut foam, it's sweet, creamy and boozy, somewhere between a Mai Tai and a piña colada.

The final touch of a cliché umbrella garnish makes it the ultimate tropical drink. 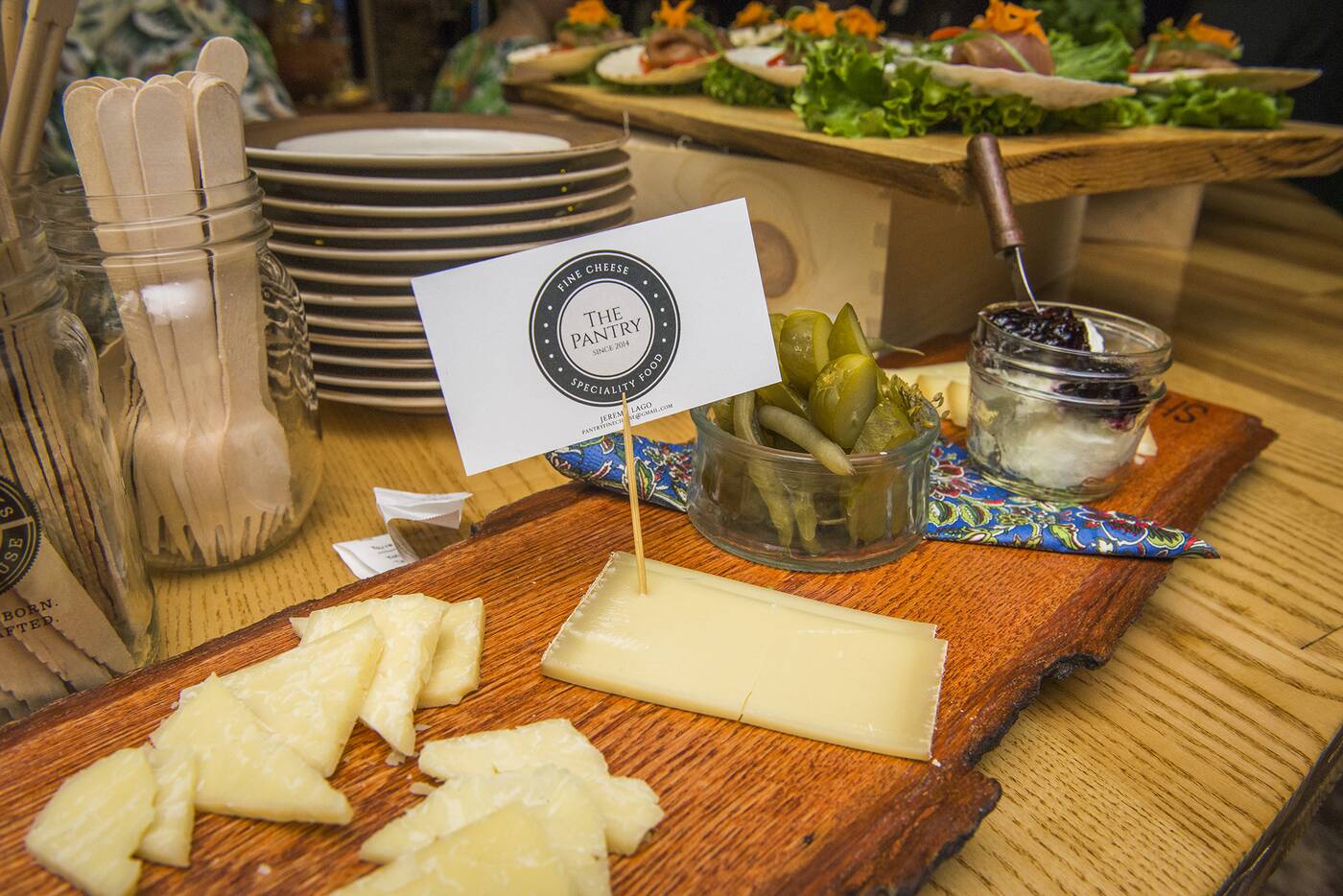 Food-wise, the bar specializes in artisanal Canadian cheeses ($6 each) from The Pantry. Tiki and cheese seems like a quirky combo to me, and when I ask why cheese, Littlejohn retorts, "Why not?" Fair enough.

"Anything goes in Toronto, and nobody really specializes in just Canadian cheese," he tells me. It also helps that he loves the stuff and knows it well. 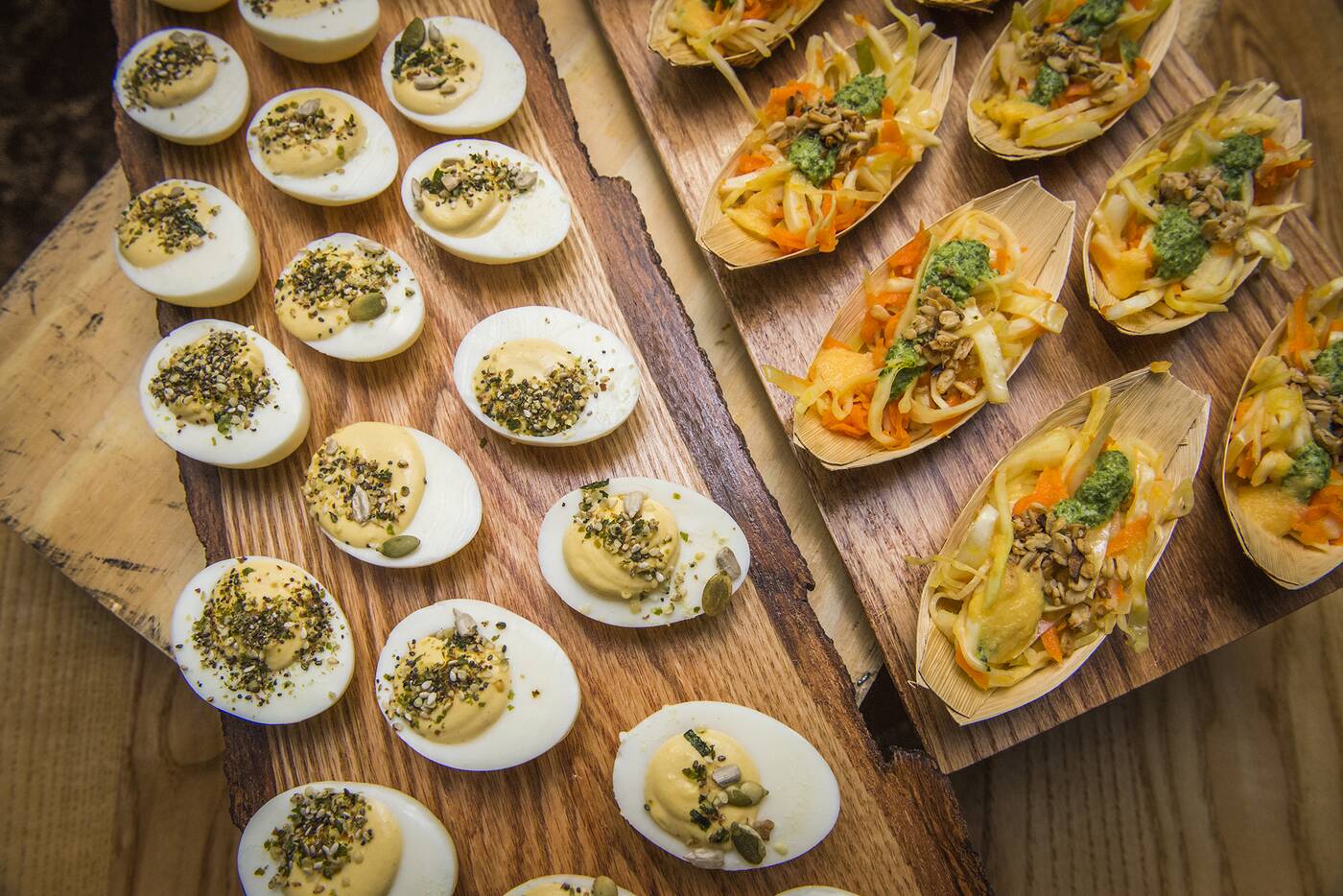 We happen to be lucky enough to visit during the bar's surprise, pay-what-you-can pop-up Global Street Food Hour, held on a random Friday each month.

This secret, family-style spread of eats is all made in house (they happen to have a full kitchen in the back but only choose to use it occasionally), and I'm honestly blown away by how delicious everything is.

It's meant as a bonus for patrons drinking there that night and the food varies each time. 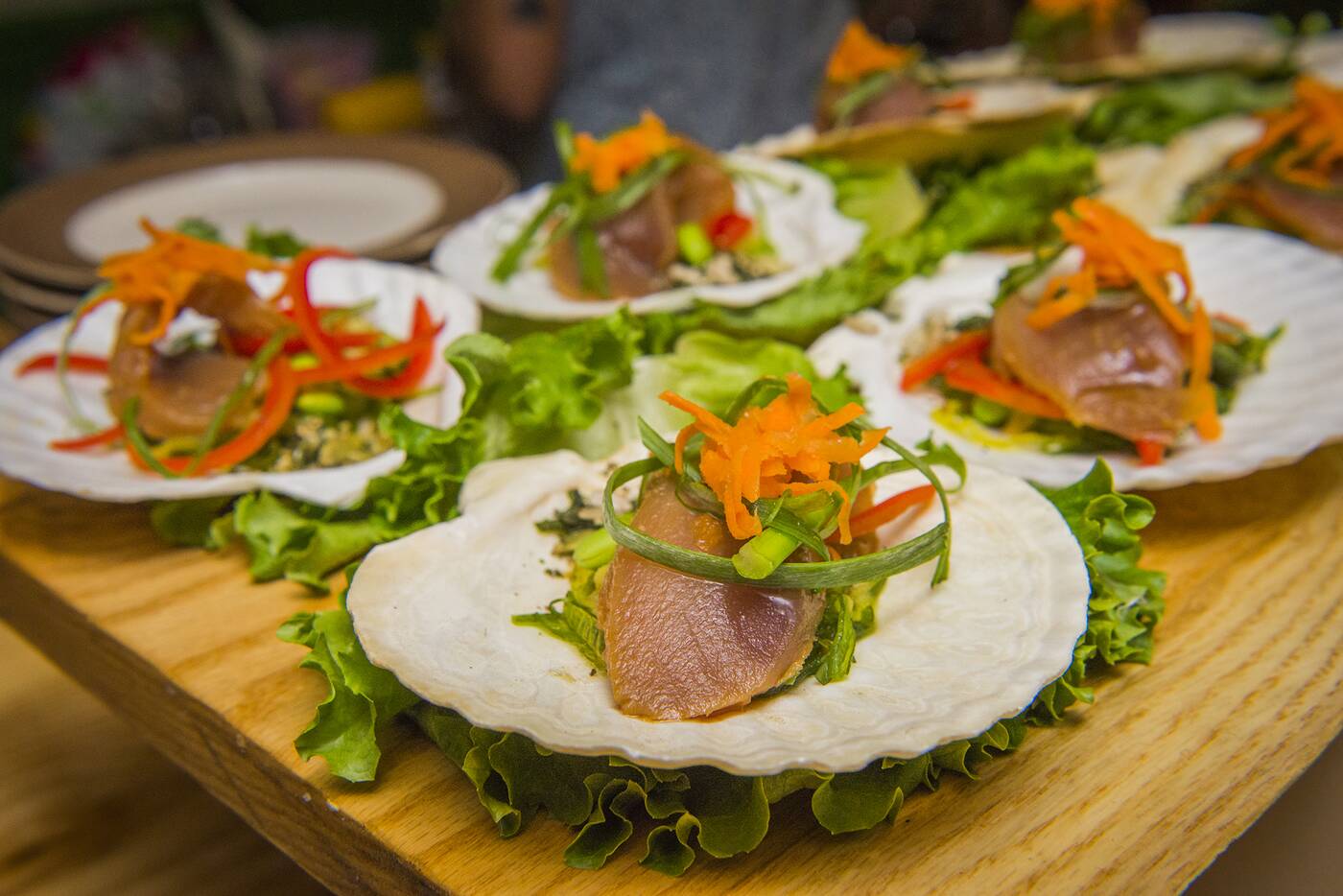 On this particular night, there's marinated albacore tuna sashimi (it's gone in a jiffy), slow-roasted chicken brined in Wellington Arkel, and an incredibly tasty Asian-style devilled egg (with crushed nori, chia, amaranth and pumpkin seeds sprinkled on top), among other things.

Past nights have featured tacos, pizza and even lasagna. There are also plans to collaborate with other local businesses for pop-up food nights, like everyone's favourite Egyptian brunch place, Maha's . "The element of surprise is what makes our offerings special," Littlejohn tells me.

While it's practically a ghost town outside, it's positively buzzing in here. Littlejohn says a lot of restaurant industry folk like to come here post-shift, as do locals who live in the area.

"We wanted to create a unique experience, and I think it's been well received by the neighbourhood." 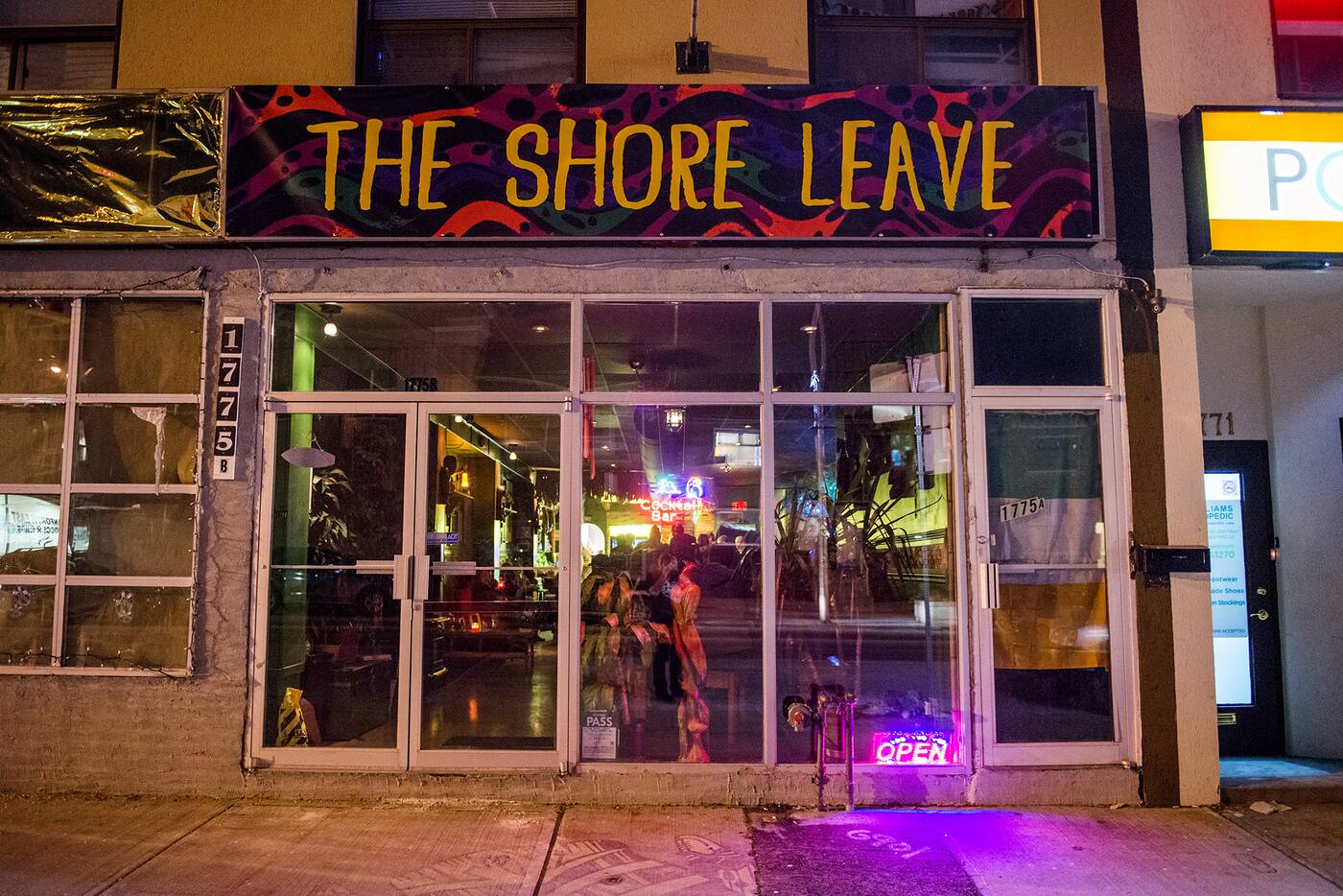