Councillor is currently open but their offerings and services may be affected due to the pandemic. Please contact the business directly for more information about any changes. Is this your business? Please contact us if you would like to update this message.

The kitchen turns out pizzas on house dough, tacos and wings, while there’s usually a batch cocktail like rum punch behind the bar. 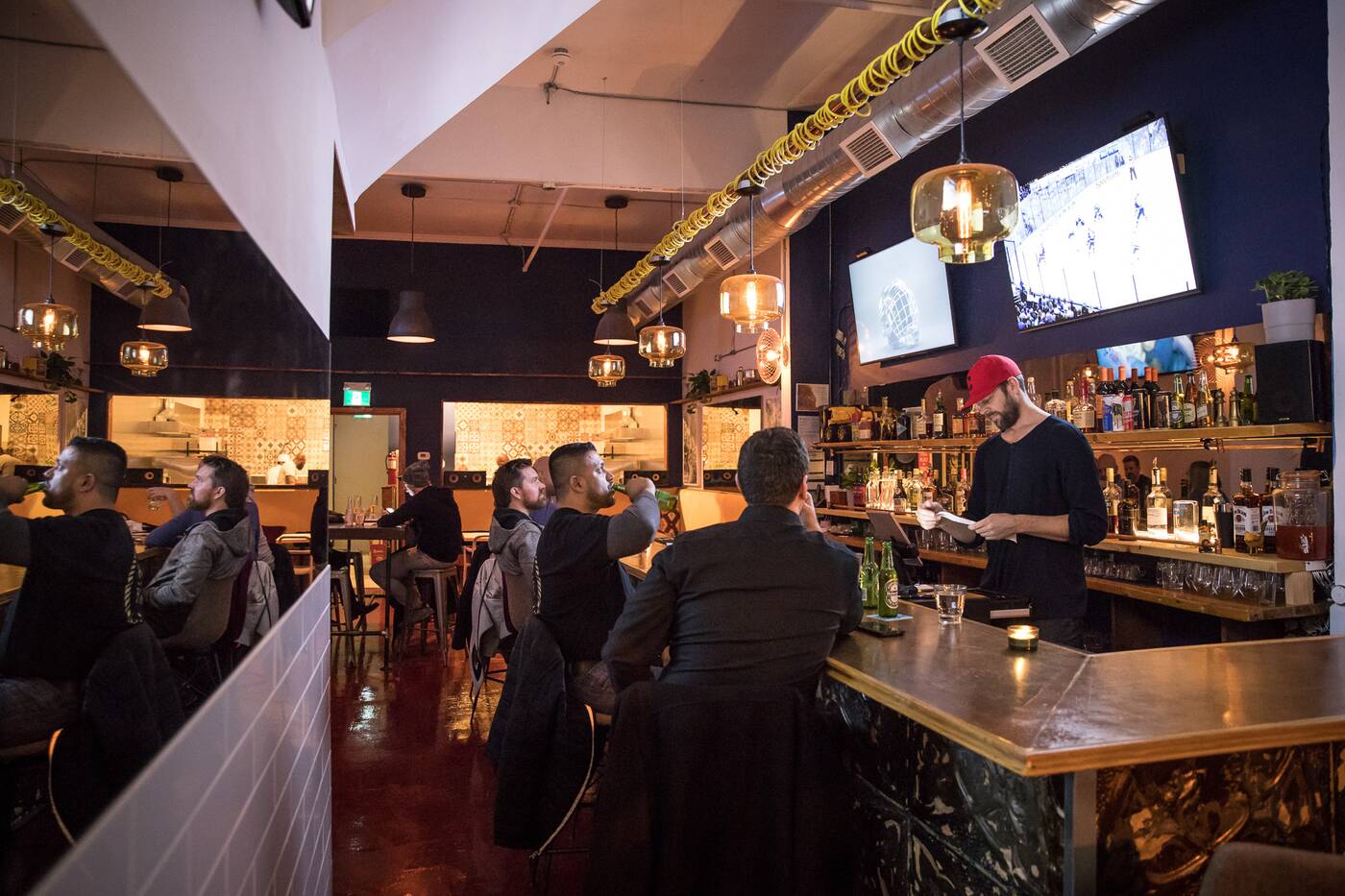 Multiple games play on different TVs in the space that used to house a hair salon, a back area boasting a corner banquette with comfy pillows. 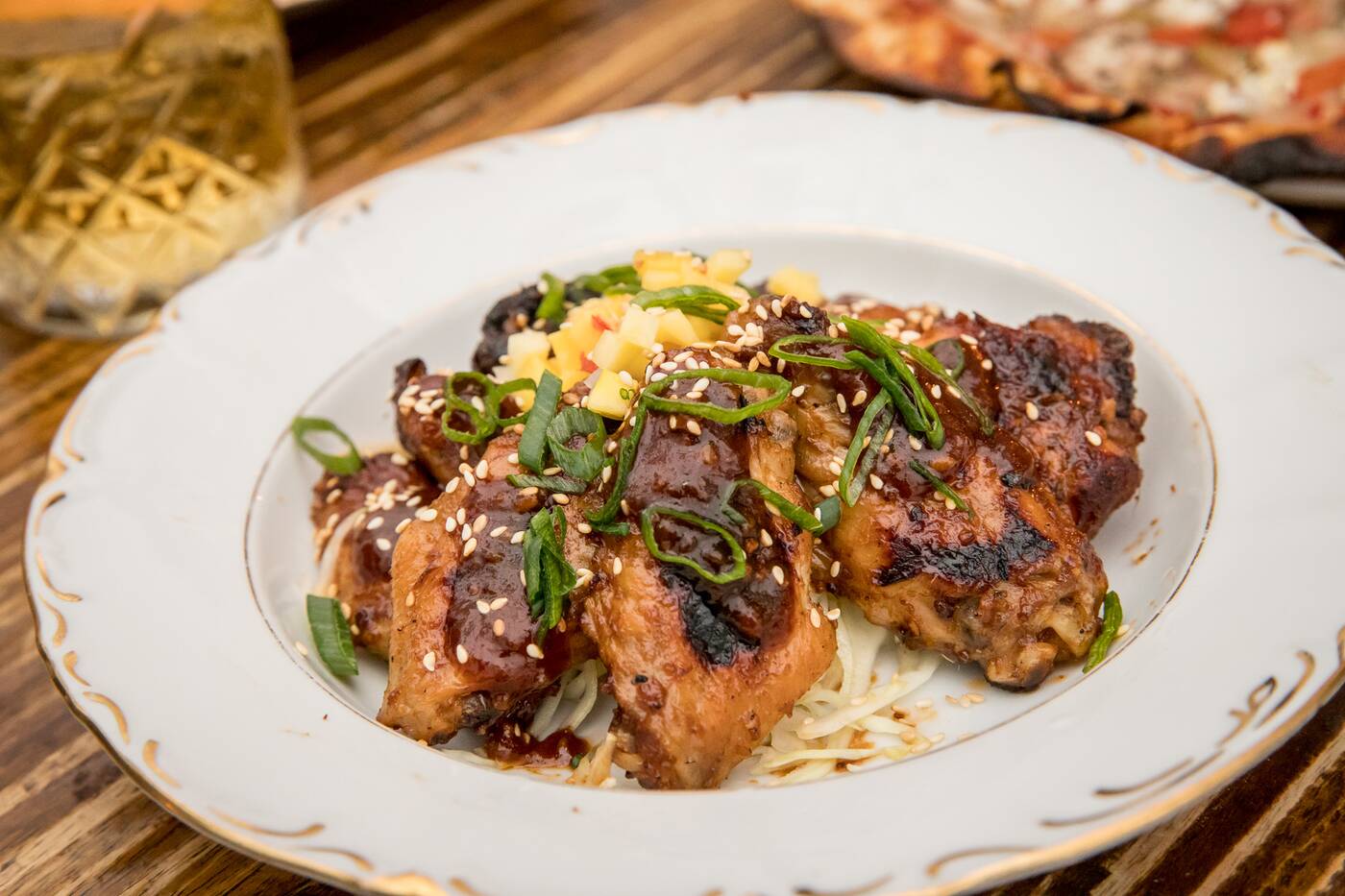 Wings ($14) are done up loosely Korean-style and served on a bed of slaw, juicy and sticky with toasted sesame seeds and scallions on top. All meats are sourced from a butcher at Dundas and Gladstone, everything obtained from as near by as possible. 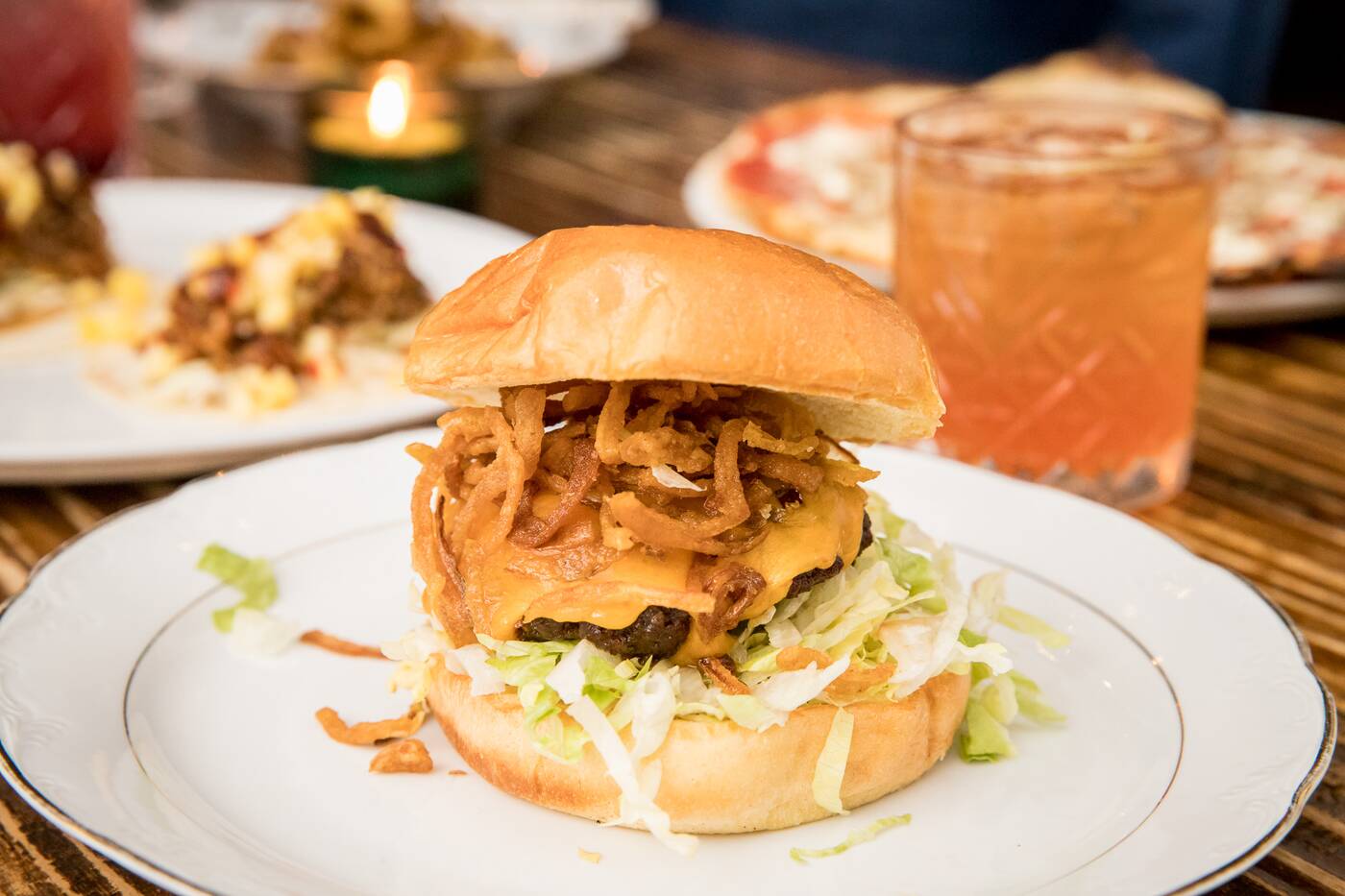 A burger ($12) keeps it simple and classic, the beef a little leaner and the patty relatively small though not smashed down. On a brioche bun, minimalist toppings include aged cheddar, crispy onions, shredded lettuce and Dijon. 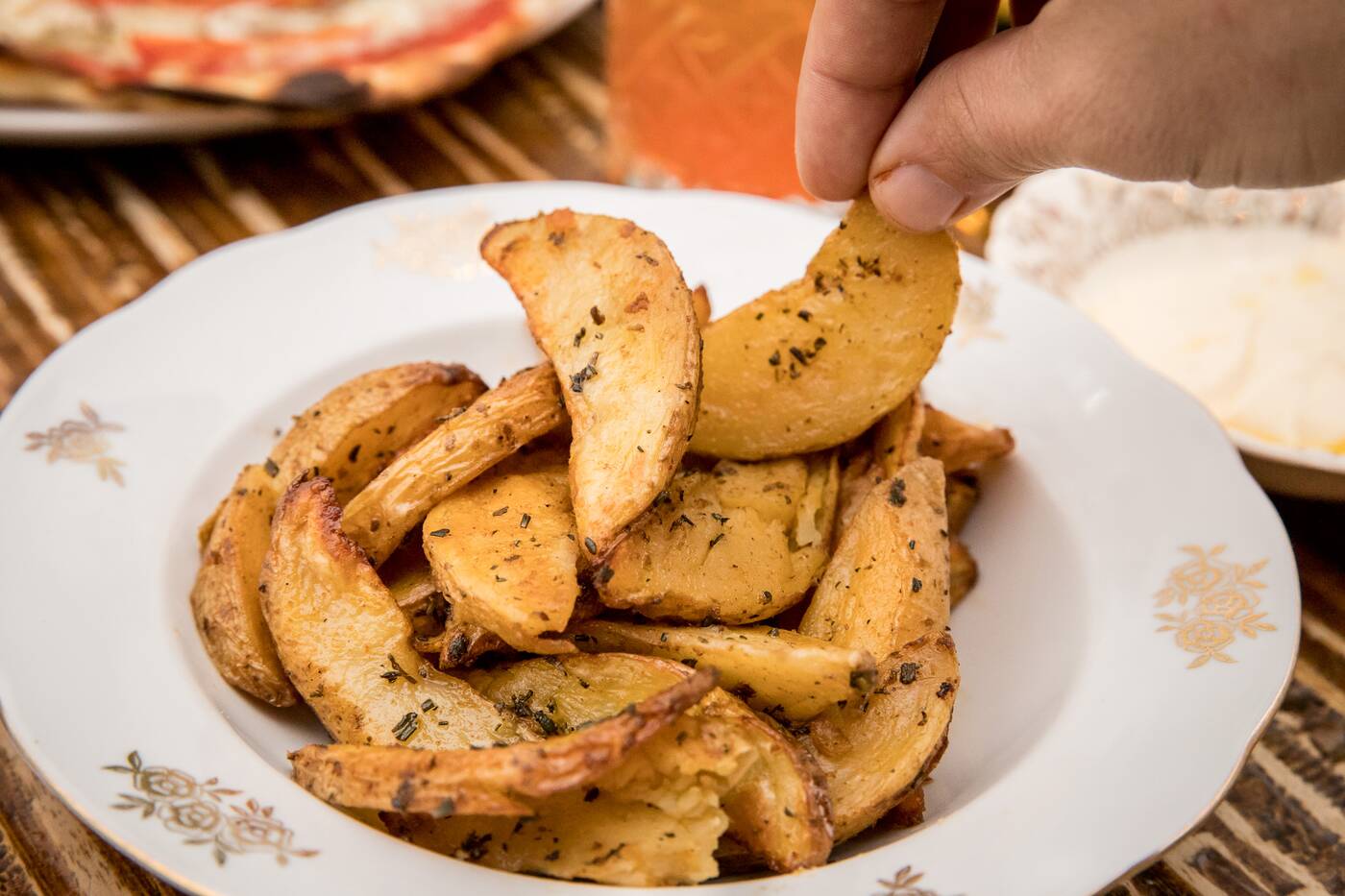 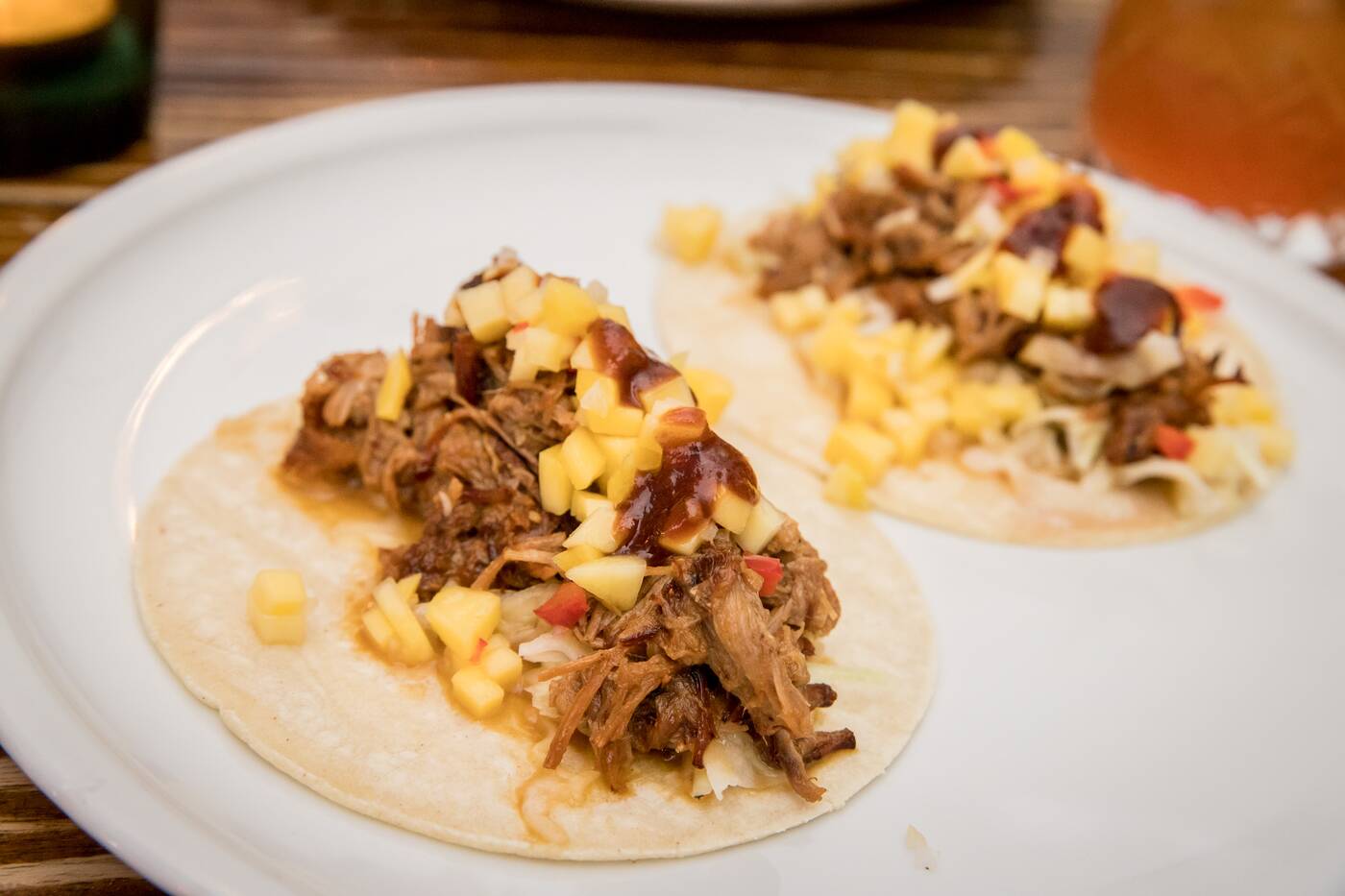 Slow roasted pork tacos are $10 for an order of two, again intended to be a bit of a play on Korean, stuffed into locally obtained tortillas. A citrus vinaigrette makes them run-down-your-arm juicy, slaw and mango salsa adding sweetness, brightness and acidity. 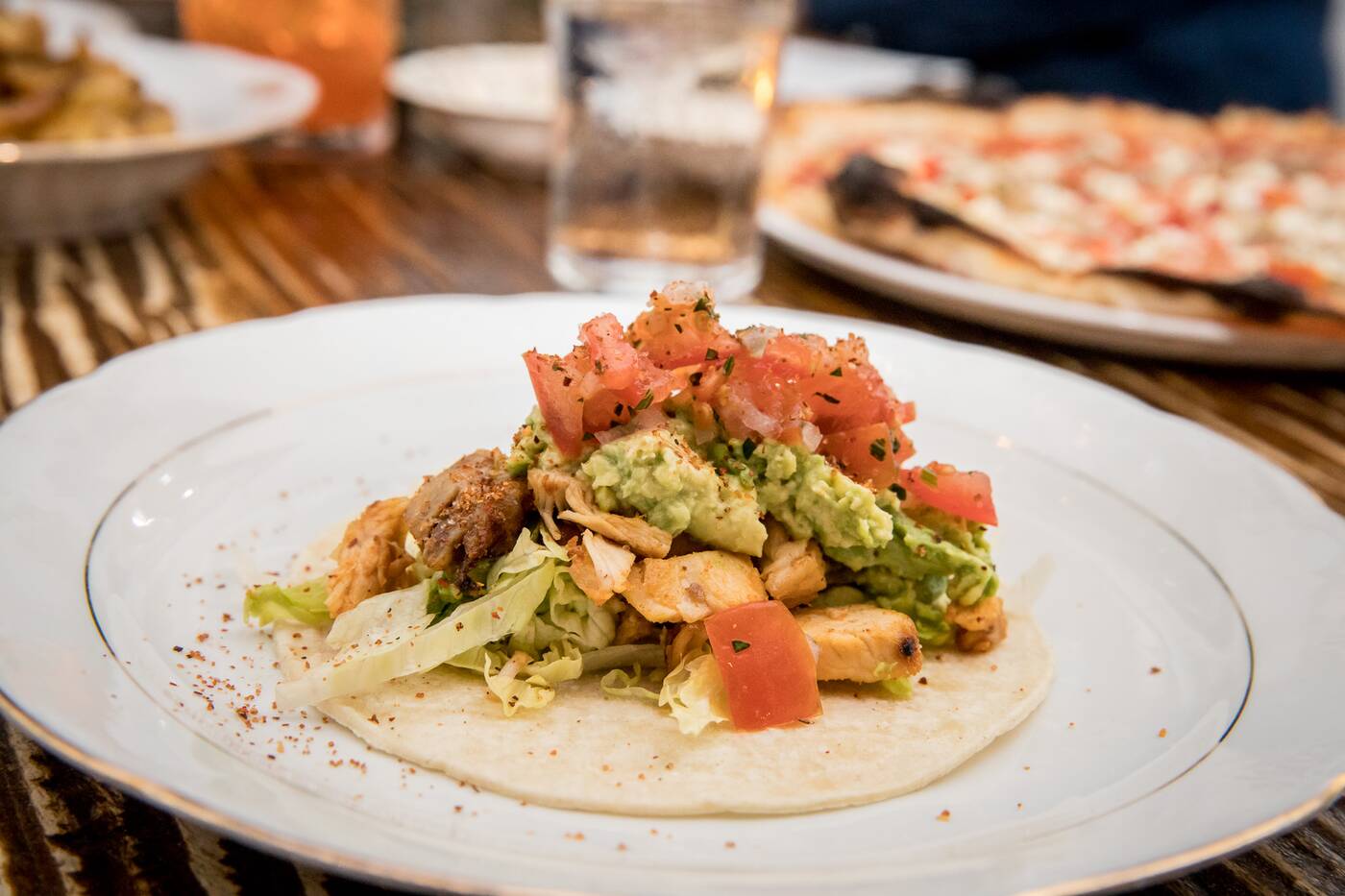 A chilli chicken variety with chunky lime guacamole and pico de gallo goes for the same price, cod tacos with ginger jam and daikon priced at $12. 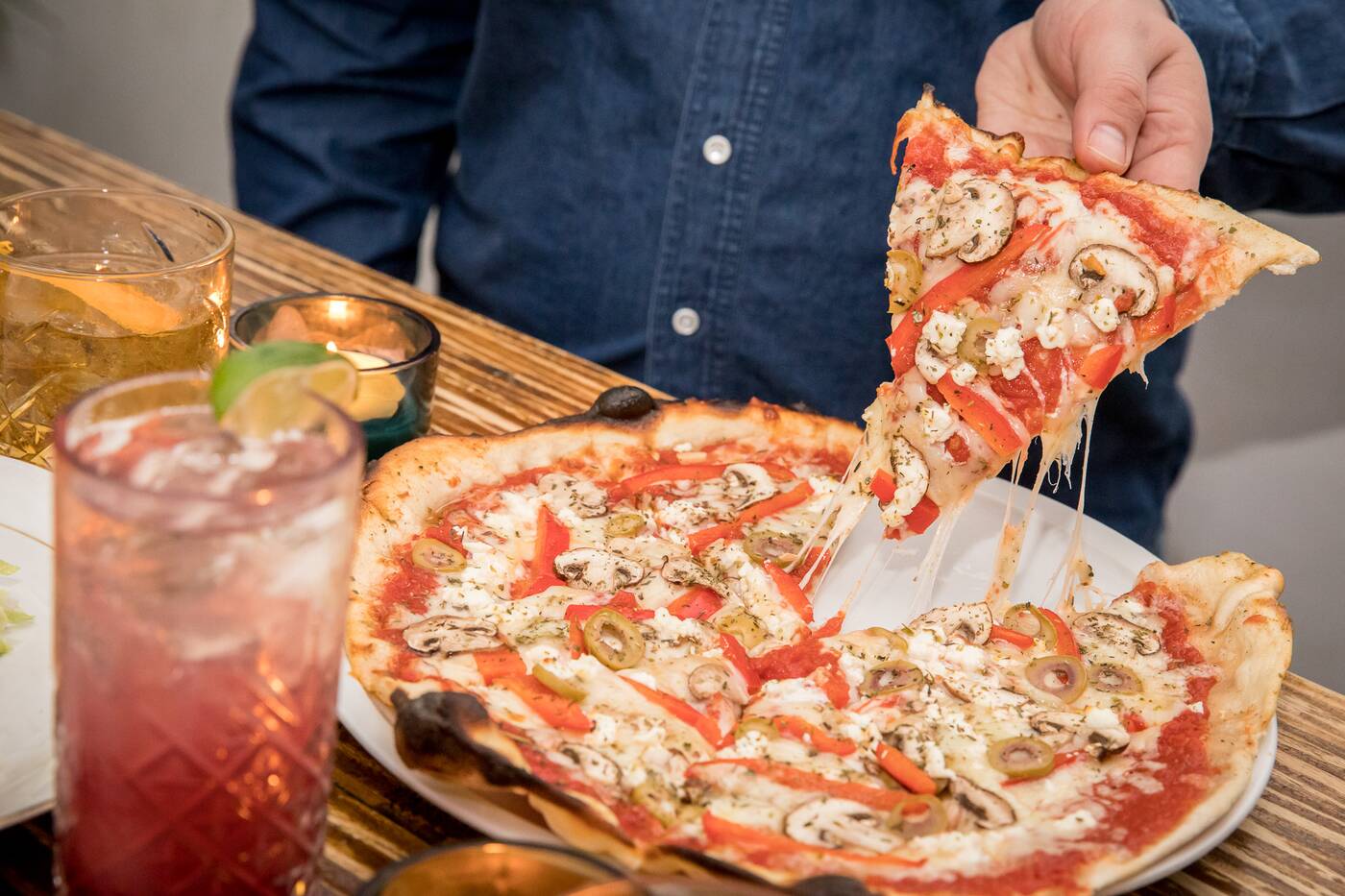 Lady in Veg ($17) is one of a few pizza options on house dough, including Oh My Meat ($19) and Plain Jane ($14). One pizza produces eight slices, the dough is unaged but falls nicely somewhere between cracker-y and puffy, and all produce is obtained from Kensington Market. 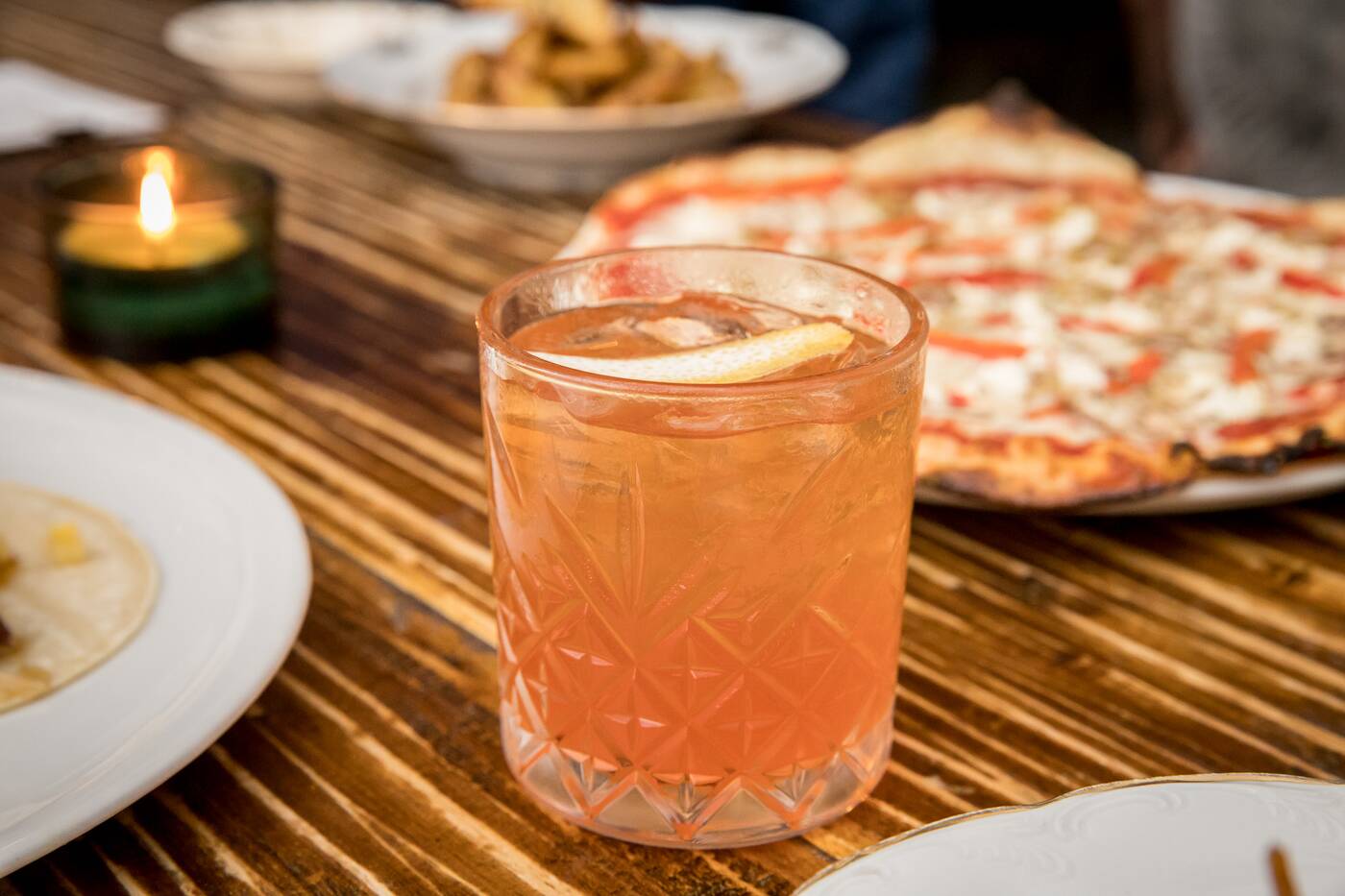 All cocktails are $12, Paper Planes batch-made tonight with Jim Beam bourbon, amaro, lemon, and aperol for a satisfying orange hue and a sticky sweetness that cuts the booze. 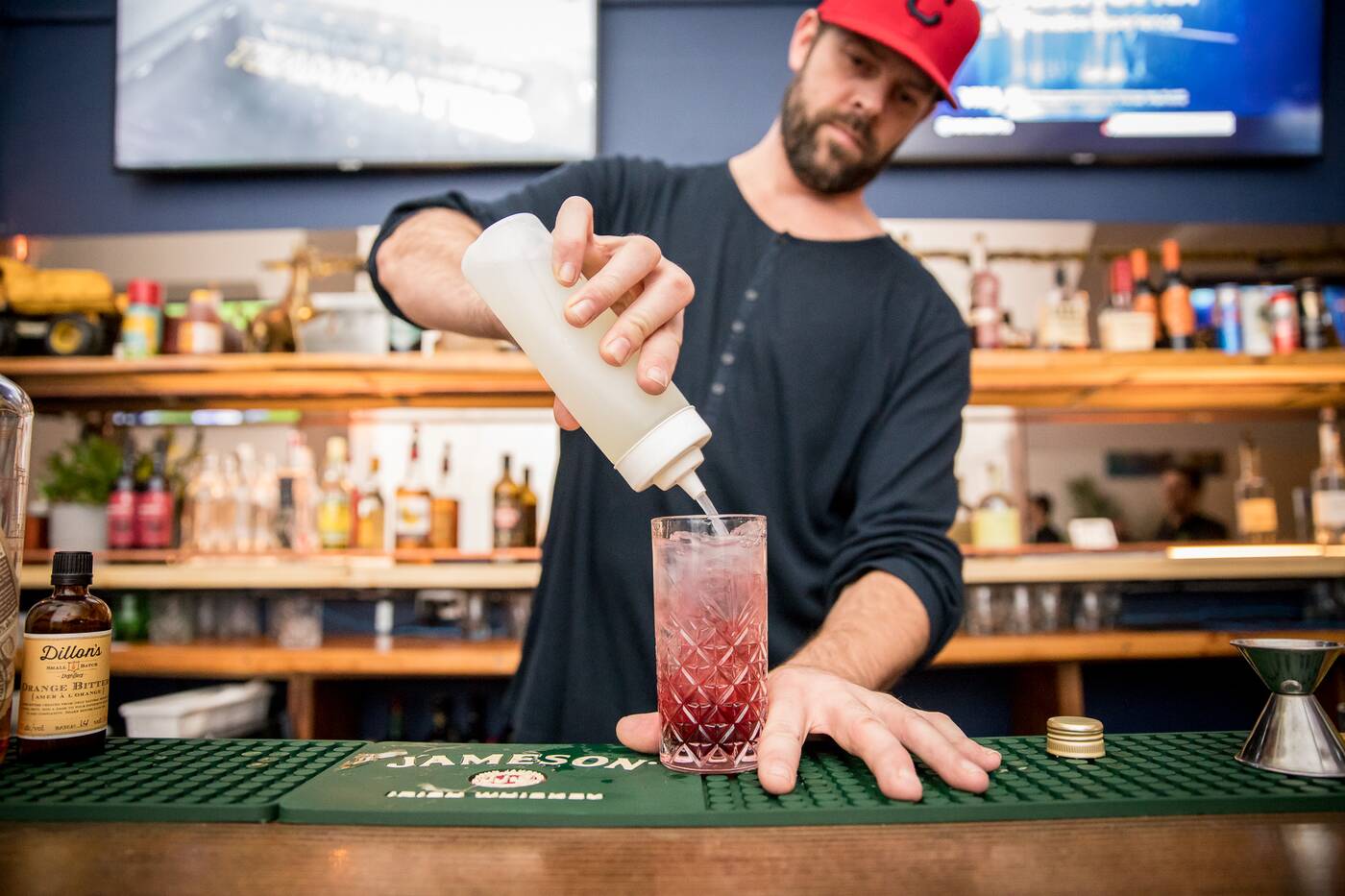 An El Diablo is a little more outside the box, apparently a French Mexican fusion that gets its colour from bitter, berry-flavoured cassis. Made with altos tequila, it’s topped off with spicy ginger beer and lime. 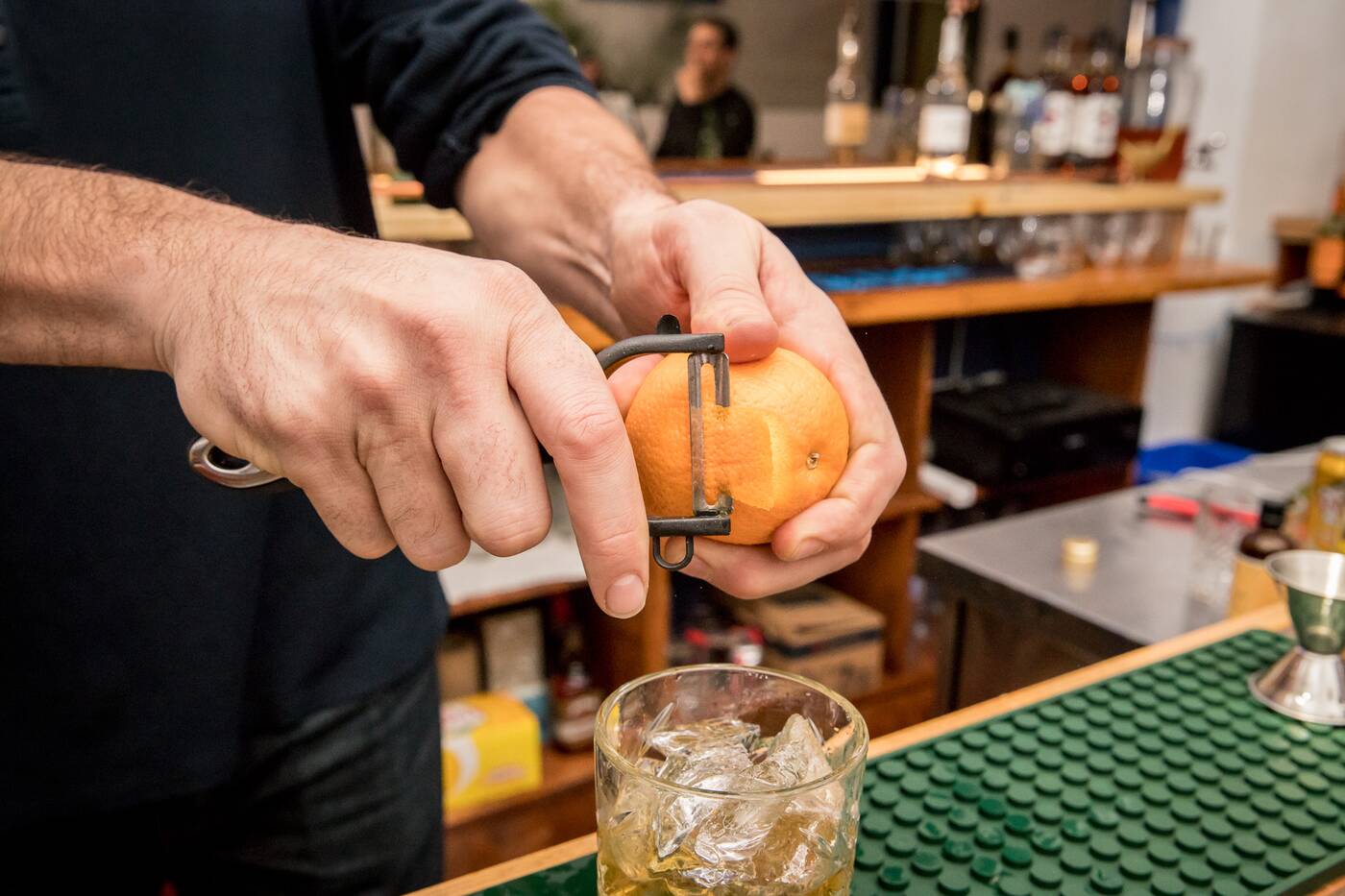 An Old Fashioned brings it back to basics with Lot 40 rye, simple syrup, and Dillon’s orange bitters for a classic combo of biting booze with a bit of fragrance. 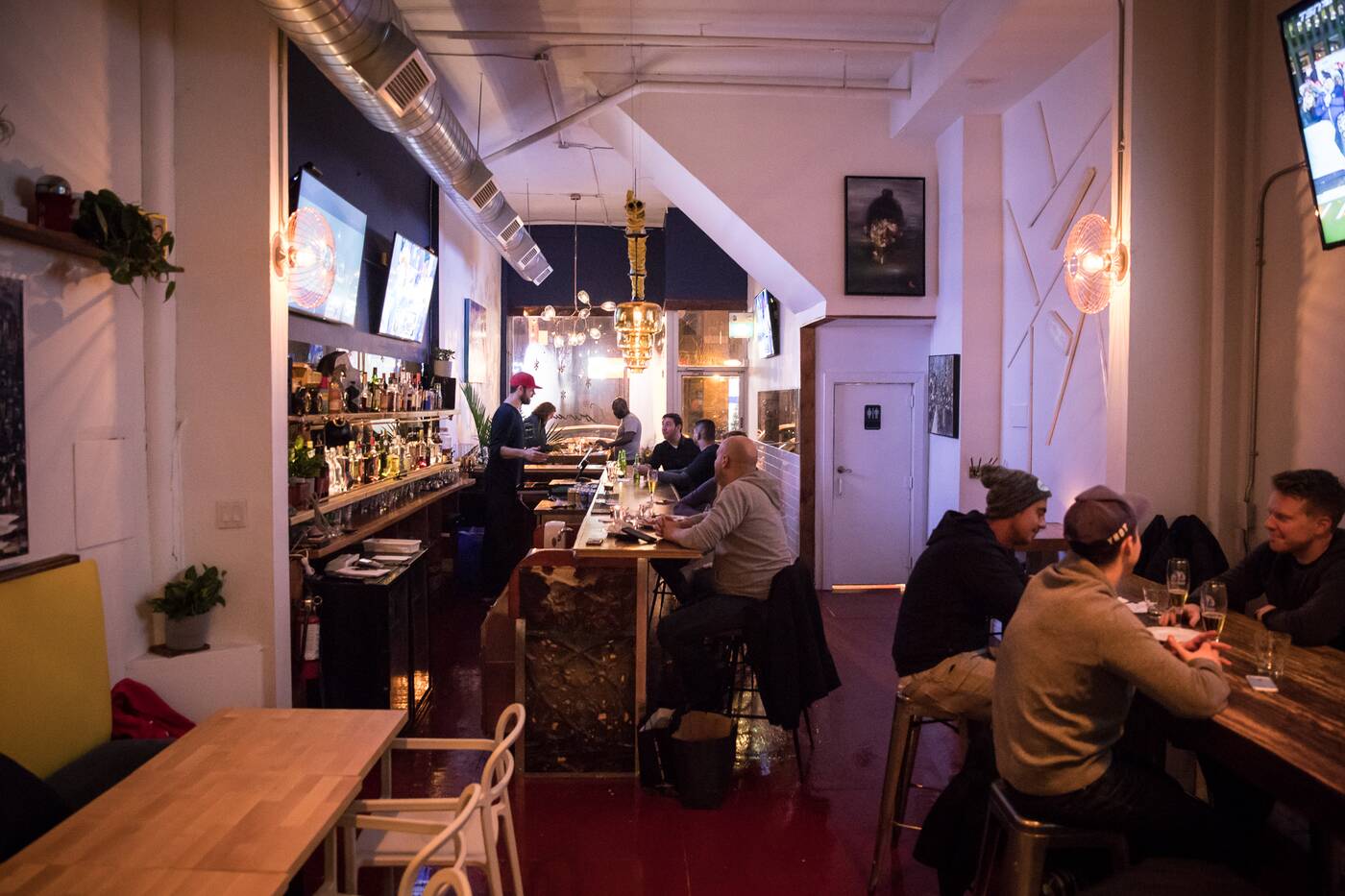 You might just also find house-baked breads such as focaccia and brunch service at Councillor. 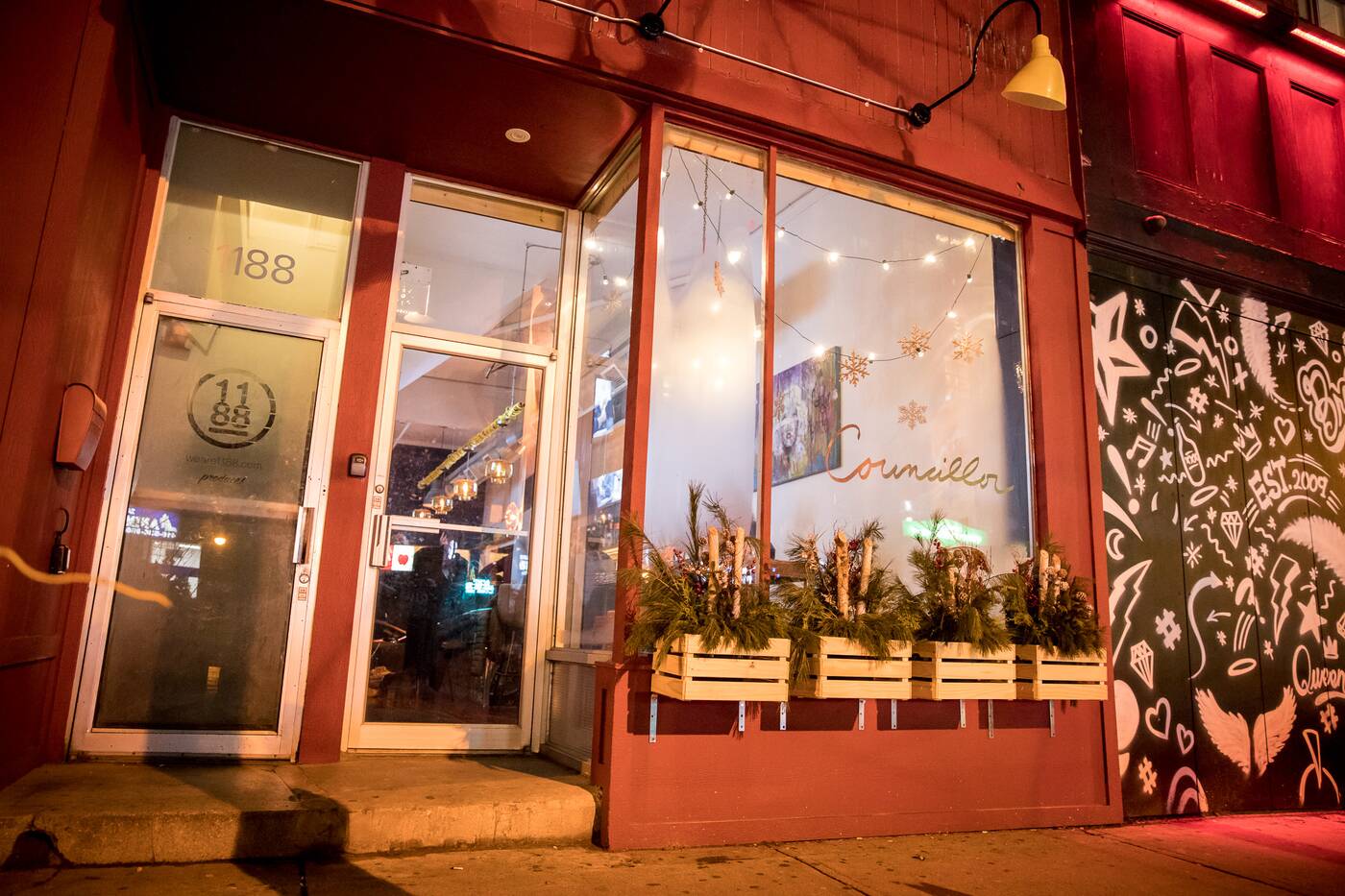