Clinton’s is a neighbourhood tavern that hosts near nightly booze-fuelled events, and deals mainly in beer and a bit of pub food. It’s cash only, though there are ATMs in the bar.

It’s named for the corner street it intersects with at Bloor, and has long been a go-to not-quite-dive for those looking for a place to start, end or continue their night for decades. 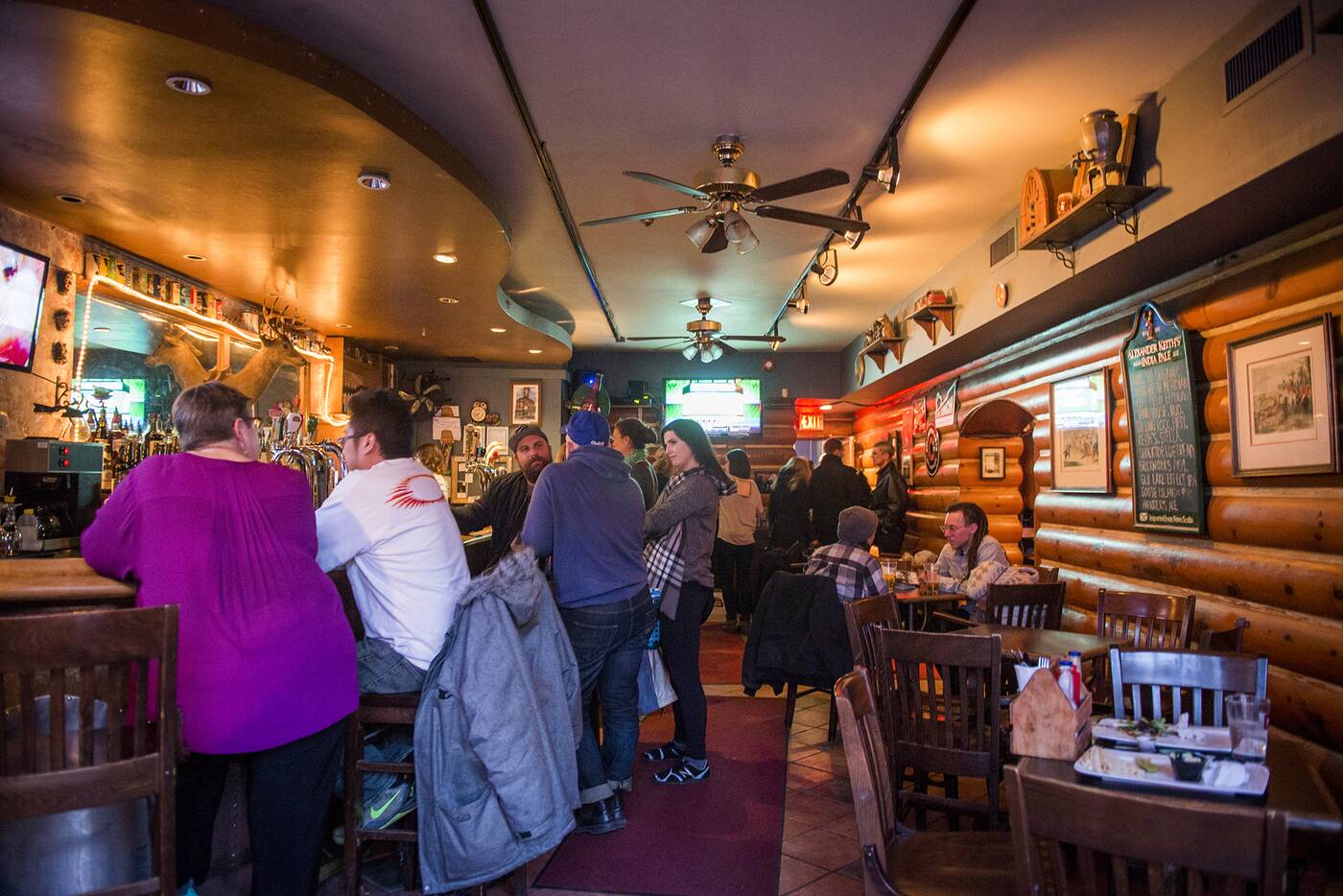 The space is divided into three chambers, with the front bar near the entrance. 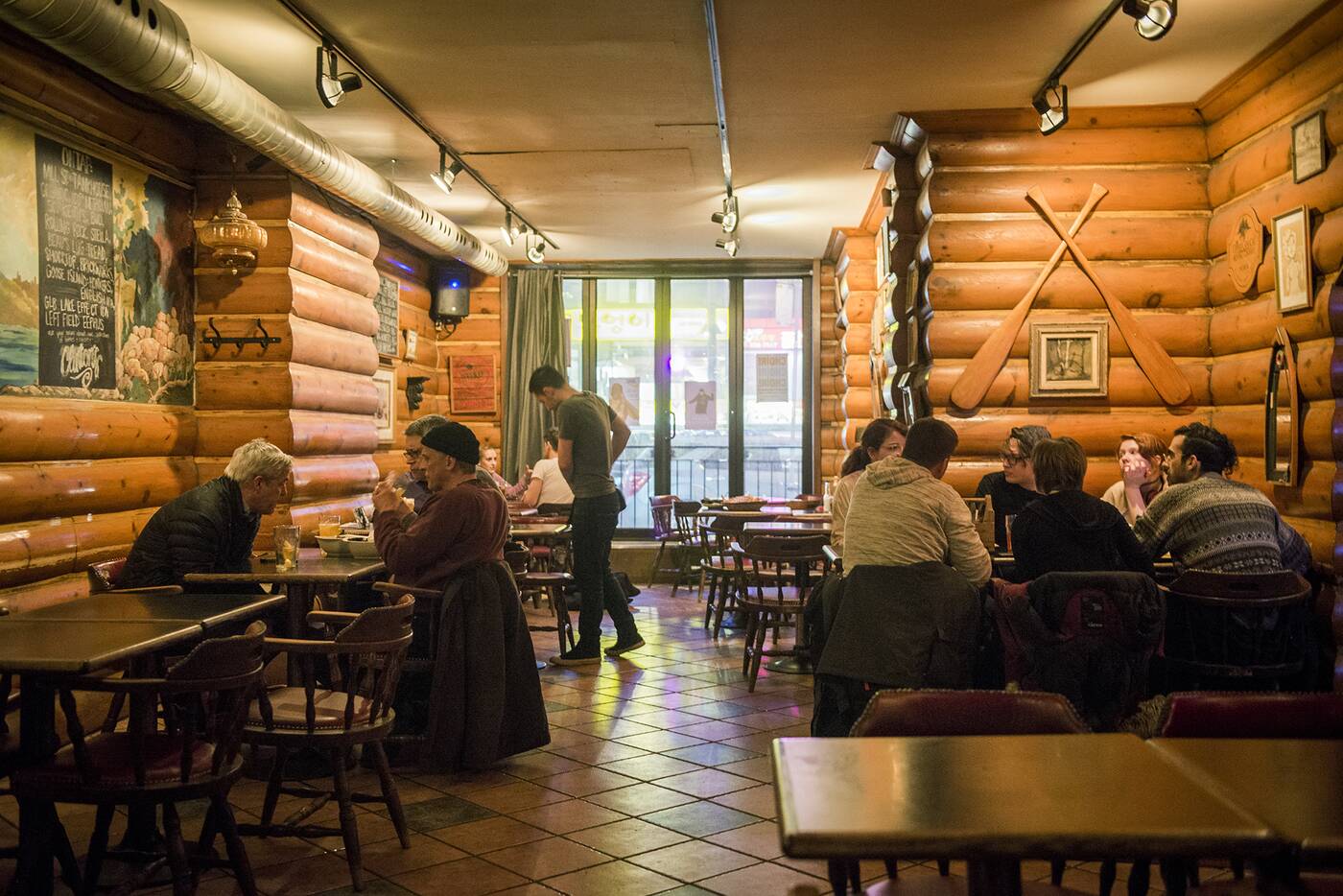 A side area is more suitable for dining and chatting. 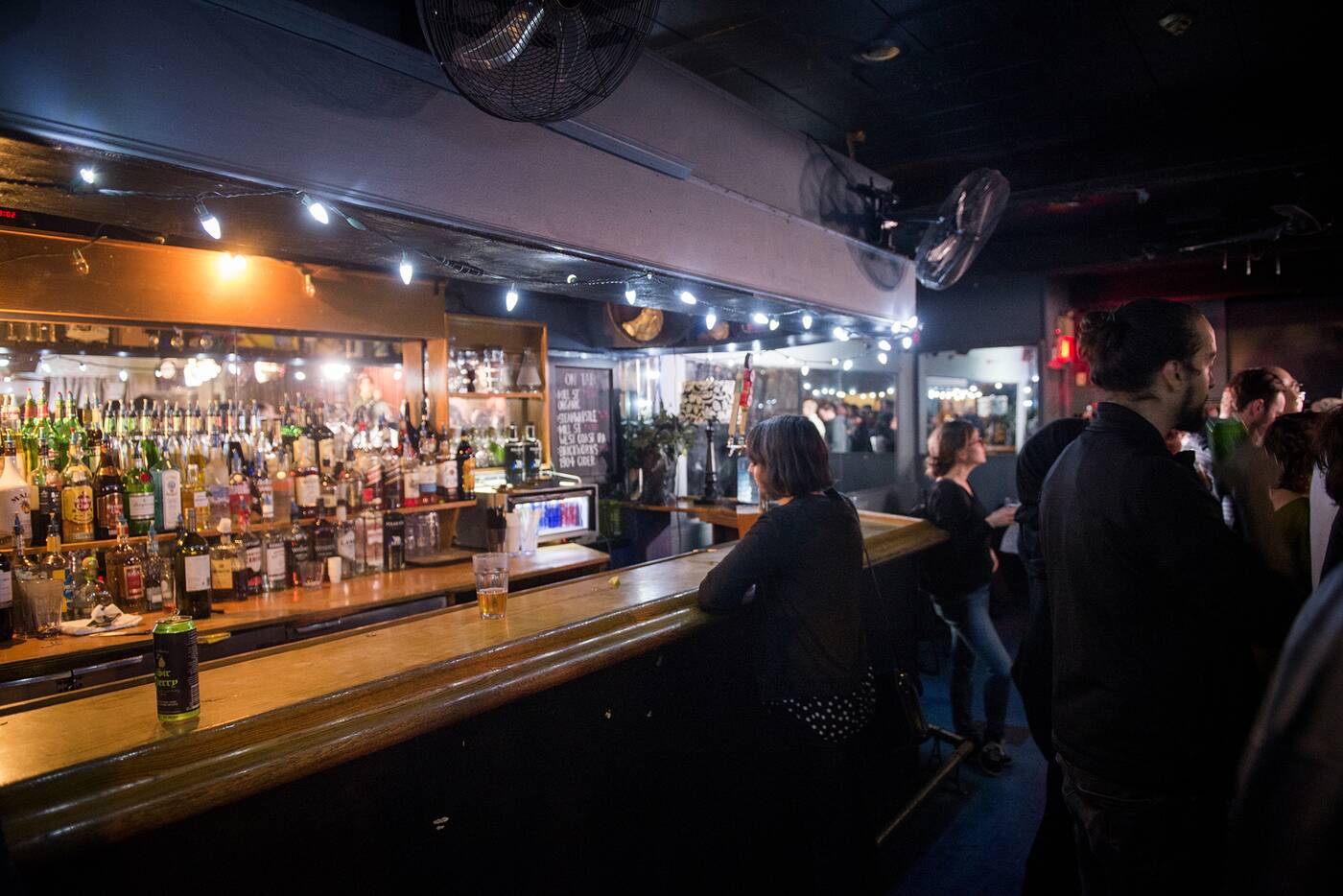 A back bar area features the stage where events and performances take place. 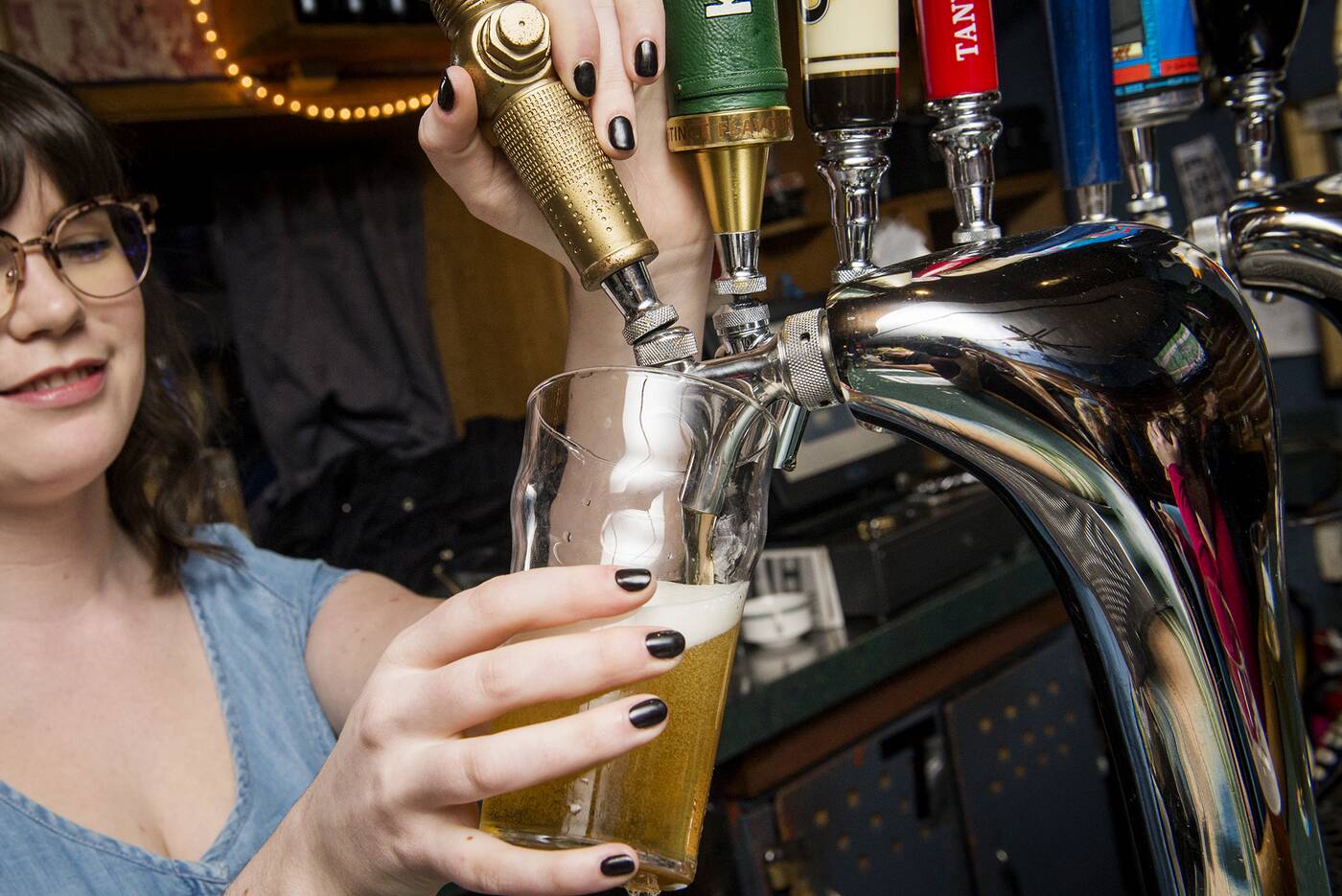 Although in the tradition of a classic pub you’re able to get your 50 and Bud on draft here ($6.25 for a pint) as well as Mill Street Organic ($5.50), they also have a decent selection craft beers. 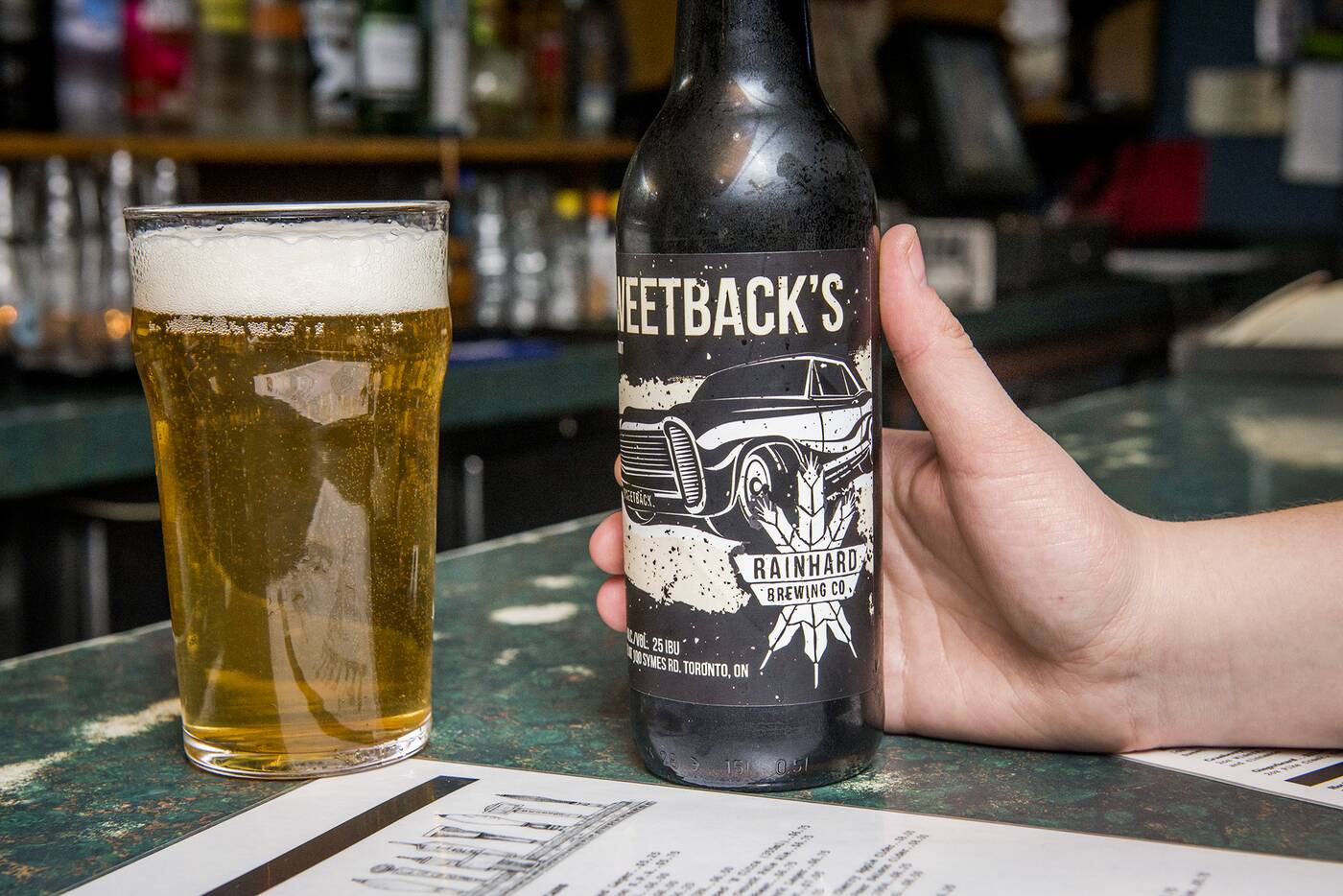 Rotating taps and big bottles are on offer from local breweries such as Left Field and Rainhard, like this Rainhard Sweetback’s ($13). 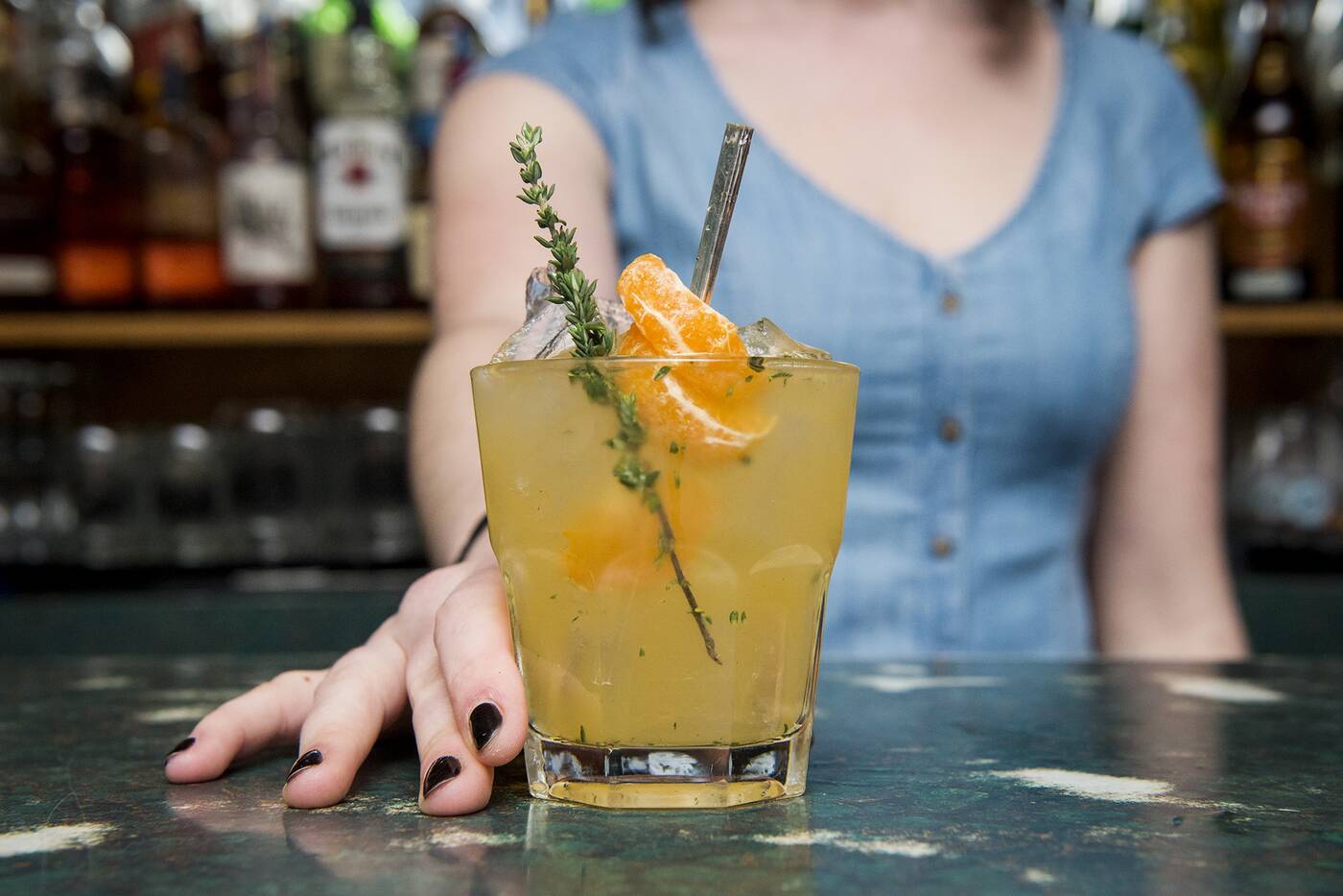 I try a Clementhyme ($11), which is appropriately girly, but I assume it’s mostly the clementine and thyme themselves which make up the price, because other than that the drink is composed mostly of water and vodka. 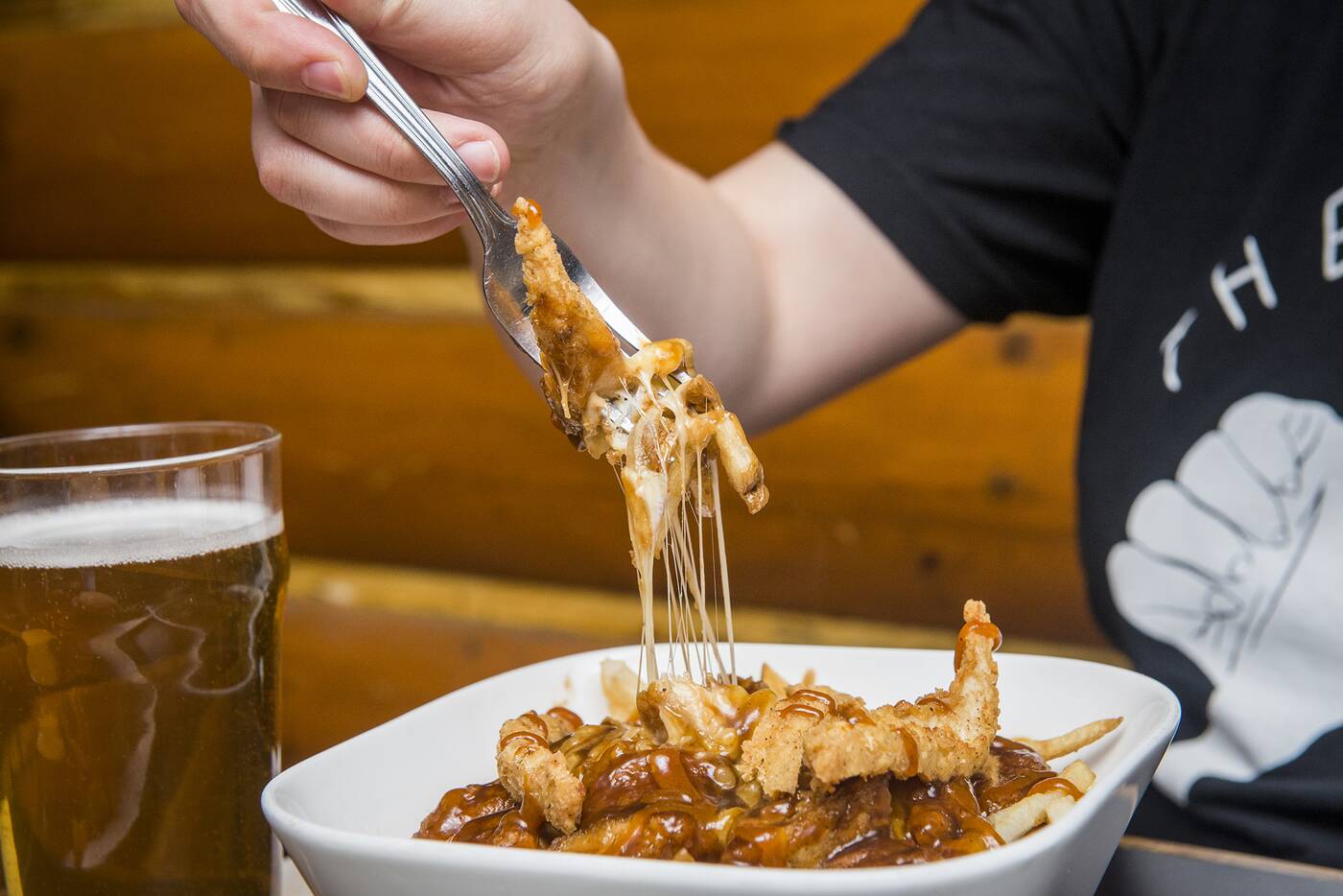 Food offerings are mostly on the standard and greasy side, though they do have vegetarian versions of almost everything, including burgers and chicken tenders. My two favourite things combine in the chicken finger poutine ($11.50), which also has two kinds of cheese, as well as a chipotle mustard drizzle I actually think it would be fine without. 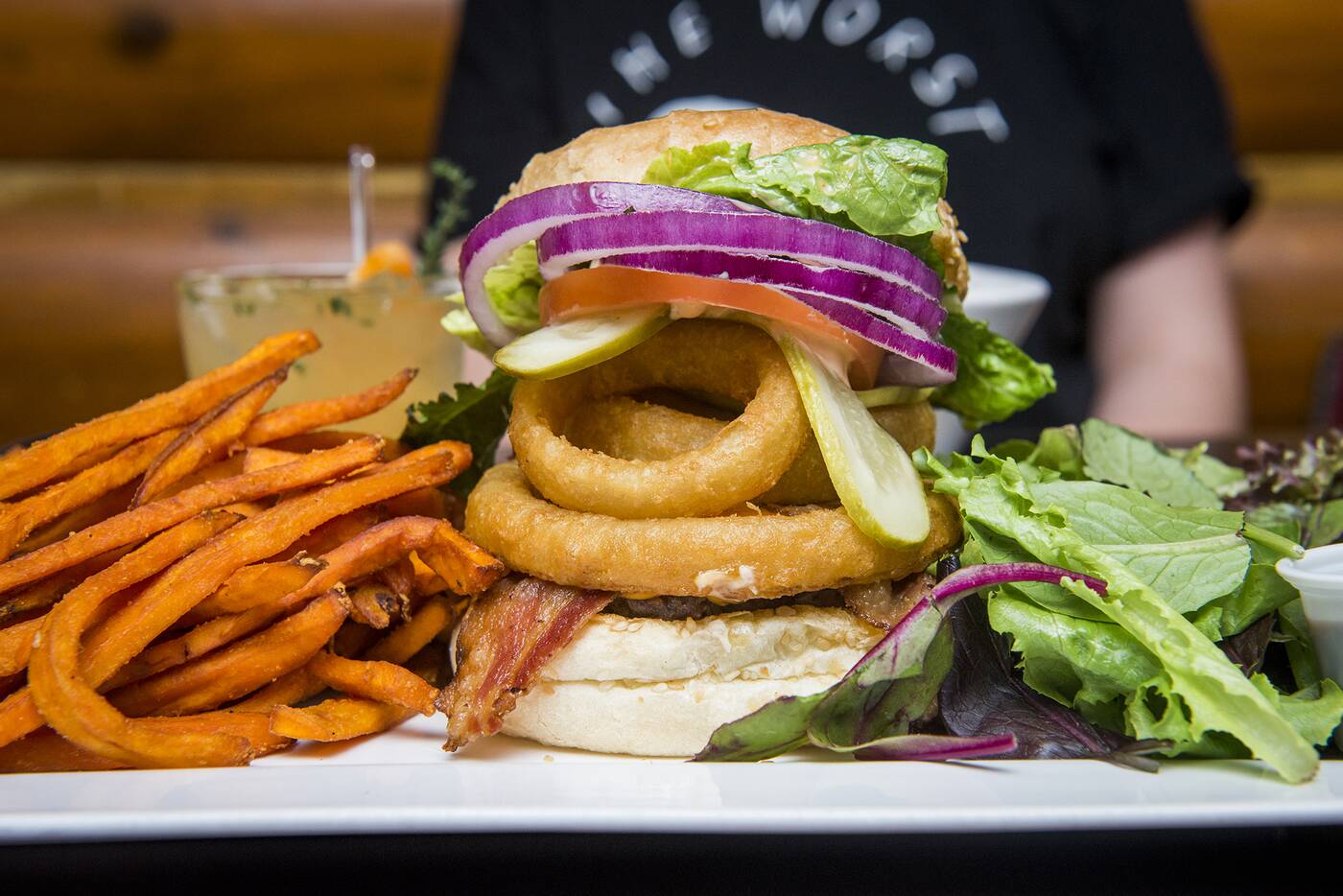 The Clintoni ($11.50) is their signature burger, topped with bacon, lettuce, tomato, onion, their “Clinton’s sauce” (a spin on a Mac sauce) and onion rings. You can make it a big Clintoni with an extra patty for $2, and the combo of crunchy onion rings, tangy sauce and bacon make this a decent burger. All burgers are served with fries and greens. 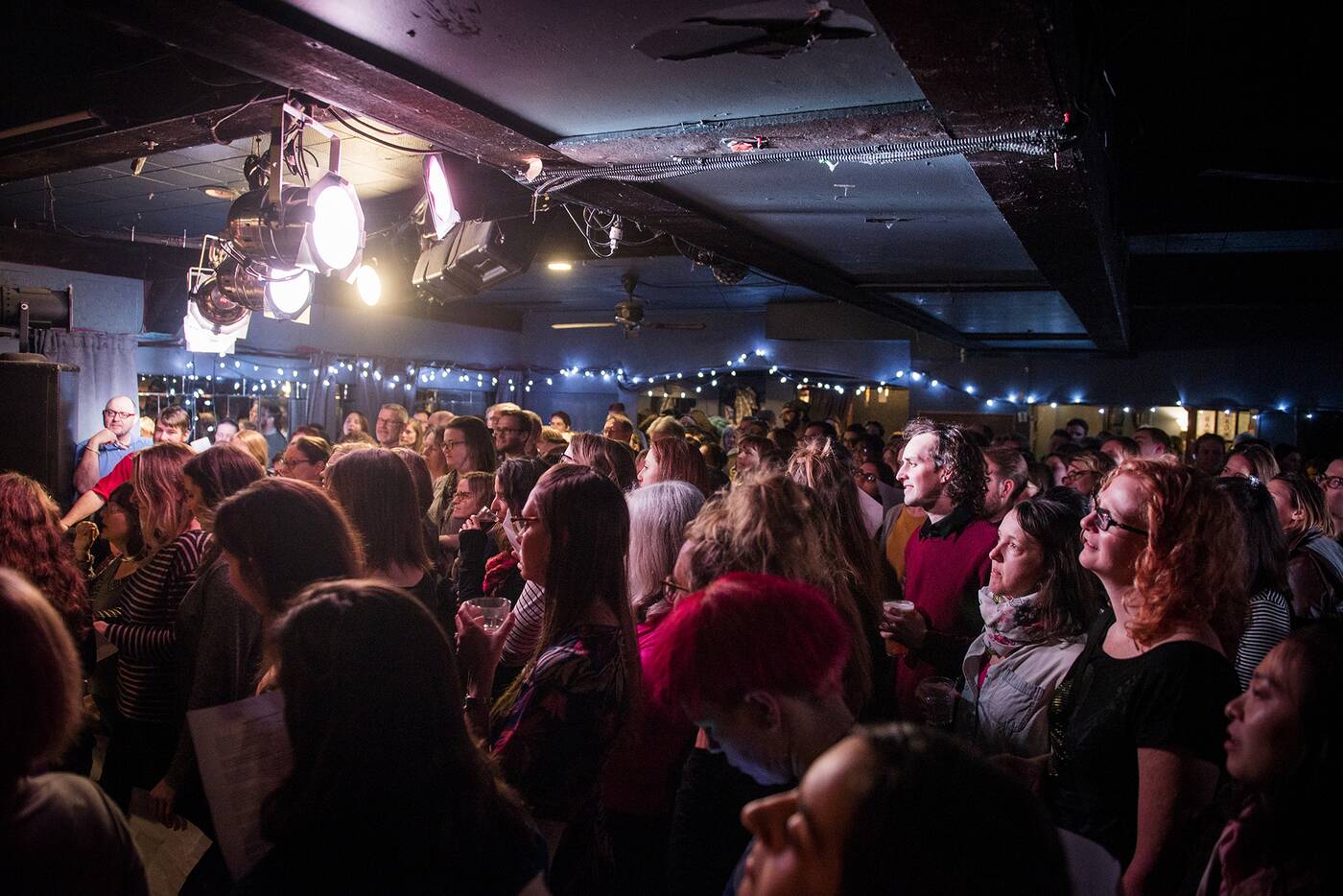 Drop-in singers (the audience) pay cover, are entertained by two comical choir leaders (just one with a guitar) who divide them into low, medium and high voices, give them parts and over the course of the night learn to sing a choral version of a pop hit. While I was there, it was “Livin’ on a Prayer.” 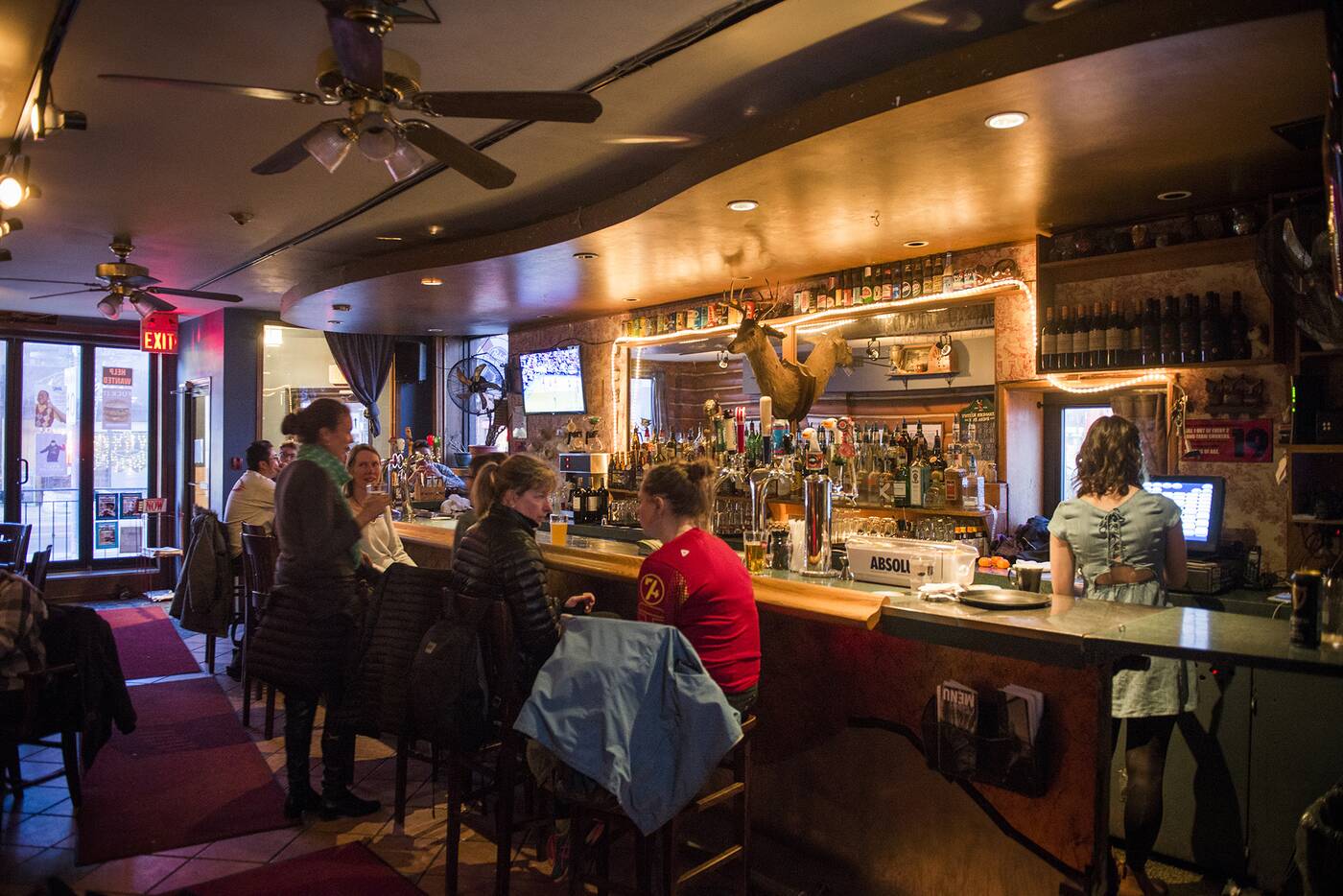 It feels homey and adequately eccentric in here, a stuffed deer head watching over the bar at the front, mismatched mugs hanging on the wall by the coffee maker, and a teeny little ladies room that’s squished between the bar and the hall leading to the back area. 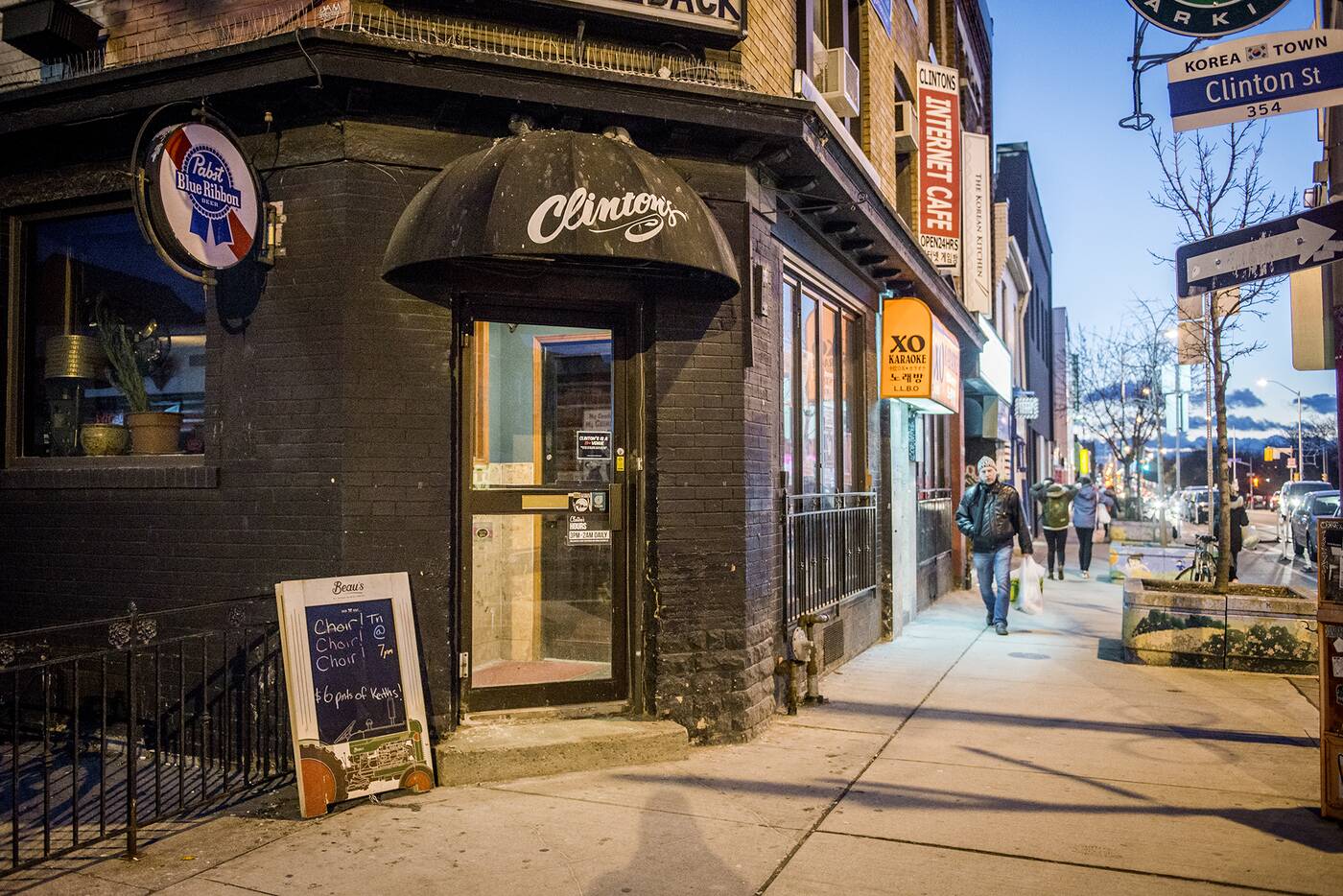