The Red Bench is a new Yonge and Wellesley hybrid operation. It's a self-serve frozen yogurt shop, a loose leaf tea cafe, but front and centre is The Red Bench's made-to-order cookie station. 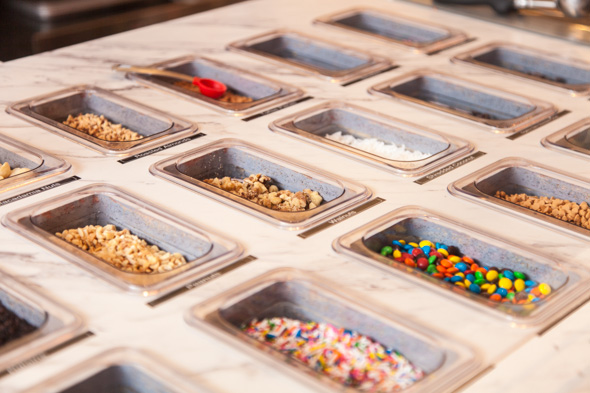 The idea might solicit fond, mouth-watering memories of the now shuttered Designer Cookie , but the process here at The Red Bench seems a little more simple; it's more about offering hot, fresh cookies than an all-out DIY. 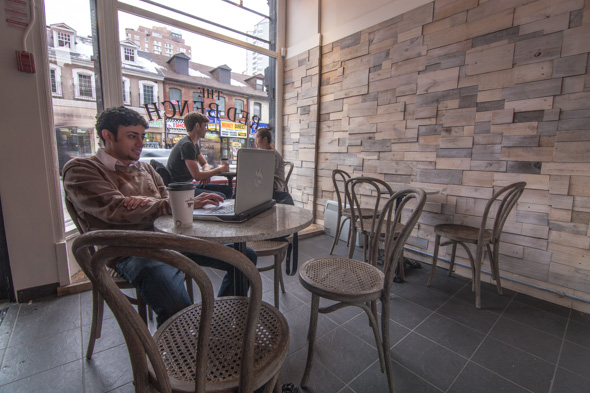 The concept for the threefold shop was conceived by Elie Kirreh and his wife, Dena, who couldn't agree on the overall focus of their place — just that they wanted to start up a new shop. "She wanted to do cookies," says Elie as we chat during The Red Bench's opening week. "I wanted frozen yogurt, so we just thought, 'Let's do both.'"

Make that "all three" when you factor in the loose leaf teas. "We're big tea drinkers," says Elie, noting that the shop does not brew coffee. "So we wanted to incorporate that as well." 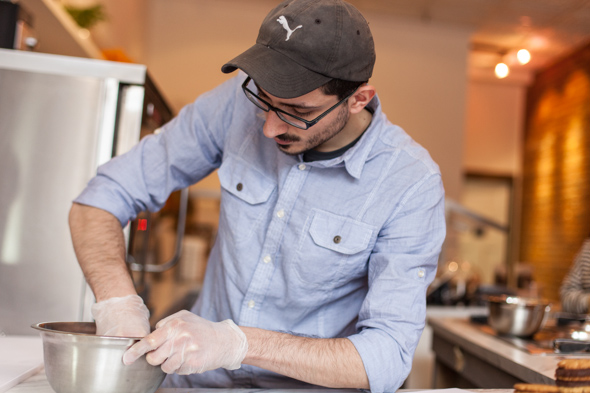 The Red Bench (which, yes, does have a bright red bench outside its front window) was founded on Dena's assortment of recipes for homemade cookies. Customers who opt to "create their own" (five small cookies for $2.75) start by selecting their choice of dough — either original, chocolate, oatmeal, peanut butter, or (coming soon) gluten-free. 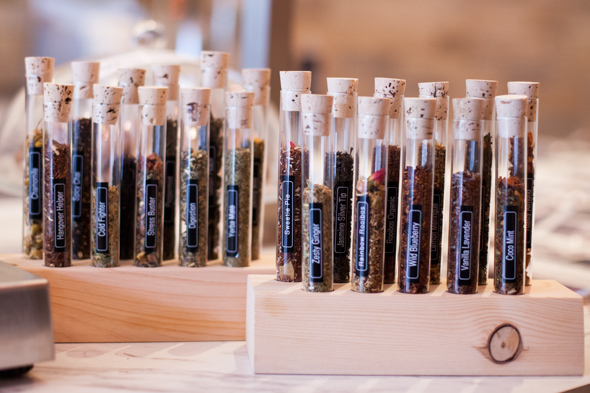 After picking the dough, customers then choose two of The Red Bench's collection of mix-ins, which include options such as raisins, walnuts, mini M&M's, vanilla chips, chocolate chips (three kinds) peanuts and sprinkles. Three minutes in the oven, another couple to cool, and you've got five hot, fresh Red Bench cookies. 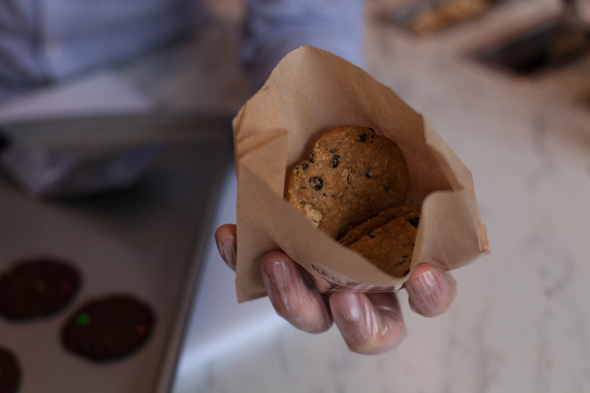 Granted, the idea is not entirely novel, but it is a nice change from some of the more tired spots that seem to plague this stretch of Yonge. "We looked all over," says Elie as he mixes up my semi-sweet chocolate chip-plus-toffee-bits combination. "The charm of Yonge is disappearing — there are chains everywhere, and money stores — so we wanted to bring something fresh." 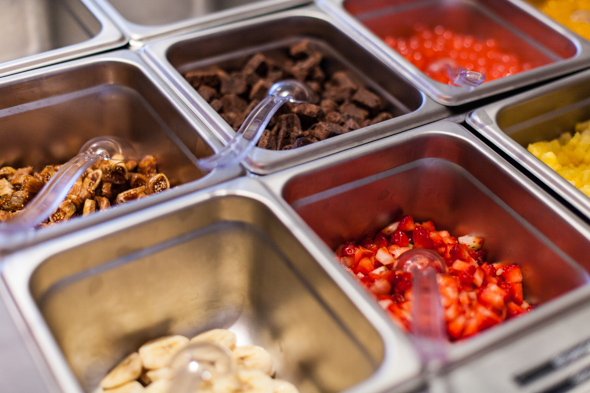 This space, formerly occupied by one of the discount Katie clothing shops, has been entirely redone and now boasts reclaimed seating and bars, a wall made of old wooden pallets, and a chic new faux-tin ceiling. The red bench outside is a replica of a bench the couple found in Paris, on which Elie proposed to Dena a few years ago. Yes, much better than another Money Mart. 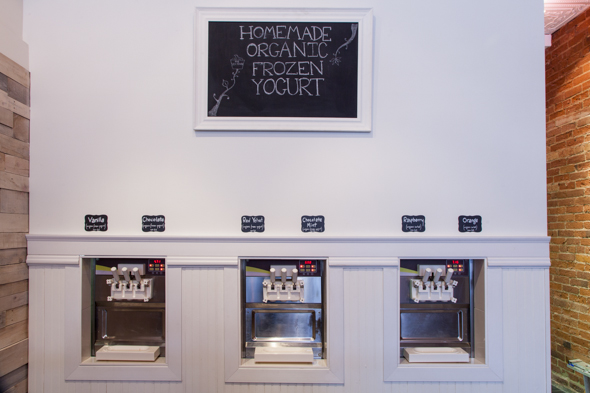 Along with hot cookies, The Red Bench offers close to two dozen types of teas (sourced from Tealish ), and six types of organic frozen yogurt from a larger roster of flavours that are all made in house. While I suspect The Red Bench might have a tough time competing with the wildly popular Yogurt Spoon down the street, the combination of cookies and frozen yogurt will surely motivate some to move a little further north. 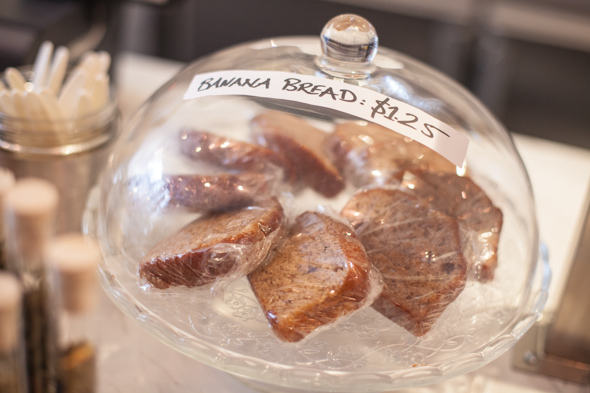 Speaking of, my cookies are handed over just at the right time — still hot, but not enough so to burn my tongue. They're crisp, a little chewy, and each about three bites, with the chocolate chips smooth and sweet, though the toffee is, unfortunately, undetectable. These cookies are clearly best enjoyed straight out of the oven, as I suspect the crispness would take over if left to cool. 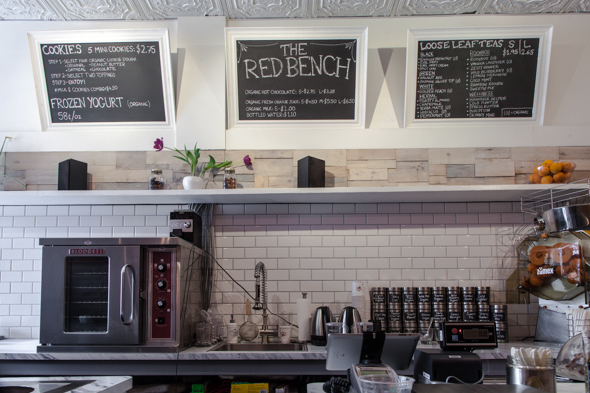 For the complete nostalgia experience, The Red Bench offers a cookies and (organic) milk combo for $4.50, and free WiFi so you can download all of those classic Raffi tunes. Hours are currently 10 a.m. to 10 p.m. daily, and plenty of seating is available beyond the red bench. 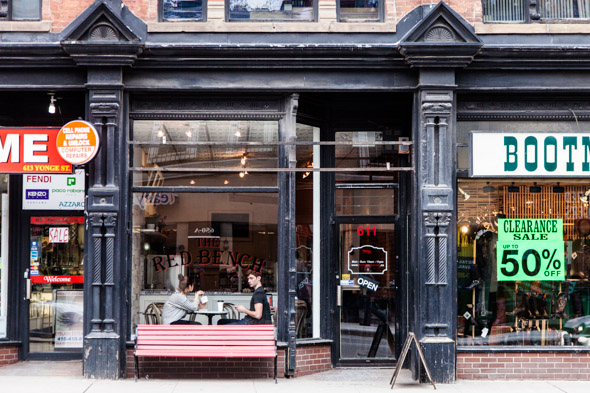