She Takes The Cake

"I've been baking so long that I just started emailing two years ago," says Adrienne Weinberg, owner of She Takes the Cake bakery café. "It's such a far cry from baking to computers."

It sounds like she baked for ten years straight, emerging from her kitchen a couple of years ago to brave new Internet technology. In this sense, the absence of a website is reassuring because these must be some fine tuned recipes - except the carrot cake. "The carrot cake is a work in progress," she says. It's labeled "tropical carrot cake," and decorated accordingly, a tempting variation of "regular" carrot cake. It looks good to me, especially for a work in progress. 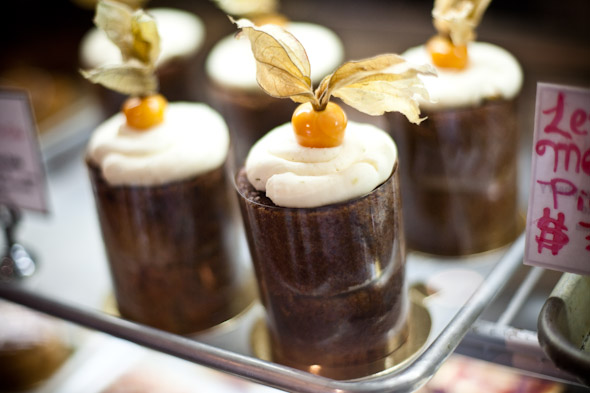 The décor inside She Takes the Cake is straight up bakery café: soothing pastels. There are enough comfortable chairs and food magazines to keep you occupied (and comfortable) for a couple hours, and Adrienne insists they'll let you stay. "I love it when people come by with computers or kids," she says, pointing out a basket of toys. They also have a big television mounted on the wall, tuned to the food network and muted, so it looks like the host is cooking in time to the piano jazz coming from the bakery stereo. 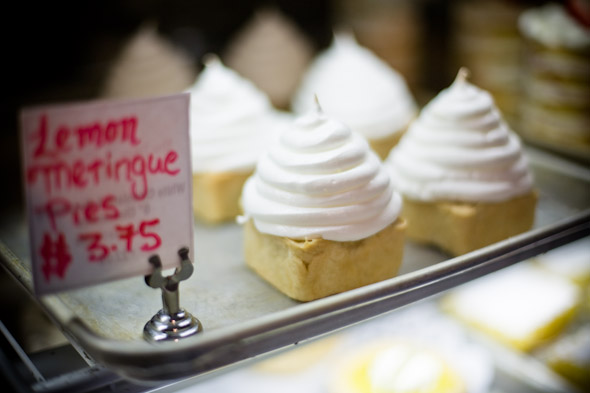 The display case is beautiful. On top is a plate of huge cookies with little pools of melted chocolate, indicating they were just pulled out of the oven. Lemon squares are bigger than usual with a hint of coconut, rivaling my (formerly) favourite lemon squares in Toronto. All the miniature pies are square shaped and tied with a colour appropriate raffia ribbon - nice touch. The crust recipe is Adrienn's mom's.

Most importantly, there is a disproportionate amount of dulce de leche treats in the fridge. I ask Adrienne about the milky, Latin American sauce. "Well, we met in 1985," she says. For a moment I think she's talking about dulce de leche, and I appreciate the personification. But it turns out she's referring to her husband, Michael, who is sitting at a nearby table with his laptop. (He is trying to find pictures of pupcakes - cupcakes decorated like puppies in various seasonal and holiday garb - to show us because there is none in the store today.) Years back, Michael did some work in Buenos Aires, which is where and when Adrienne got interested in dulce de leche. It became her first official product in 2000 when she began supplying jars of it to Pusateri's . 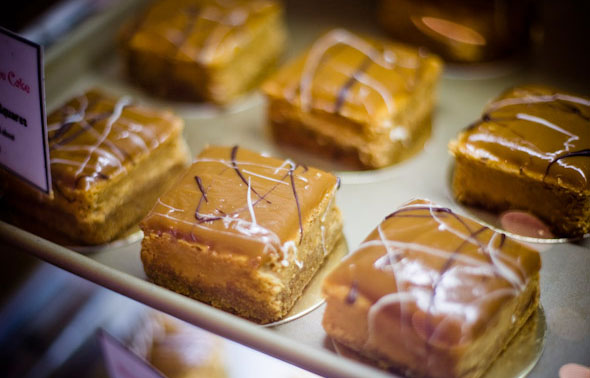 Aside from the Chilean bakery near my house, my experience with dulce de leche has been limited. I also don't usually care much for cheesecake (aside from my mum's chocolate cheesecake). Evidently, nor did the guy from Pusateri's who initially told Adrienne "the world doesn't need more cheesecake," when she pitched a dulce de leche cheesecake to him. He changed his mind once he tried it. My cheesecake apathy is similarly shaken once I try it. It's a rich, smooth and delicious treat (and at $3.50 a square, a great price I might add) with a thick layer of dulce de leche on top, drizzled with chocolate. It is one of the most indulgent and immediately addictive pastries I've ever had. Also offered are dulce de leche hearts and killer alfajores. 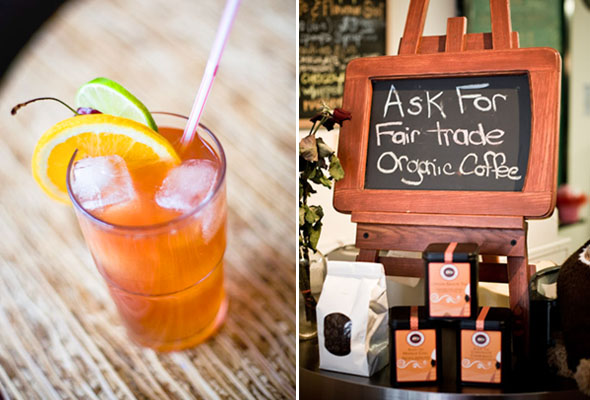 Customers can request fair trade/organic espresso beans for a bit more money. For now, all the beans are from Classic, but Adrienne is excited about bringing in coffee from Zaza. She also shows me (and lets me smell) much of the tea selection from Tea in the Sahara. "Everyone that comes in here for a cup of tea is happy," she says. Alyssa (the photographer!) is definitely happy with her iced white tea garnished with assorted citrus. It's washing down her homemade mac and cheese with Gruyere and sharp cheddar - comfort food to the max.

She Takes the Cake offers plenty of lunch options including homemade pizza (which looked incredible but wasn't done in time for me to try some), sandwiches (including turkey with homemade cranberry sauce) and bagels from Gryfes ($2.50 with cream cheese). Apparently the Dundas West crowd is crazy for Gryfes bagels. "They go like water." I'm jealous of this bagel-loving crowd. If only I consumed as much bagel as water in a day. 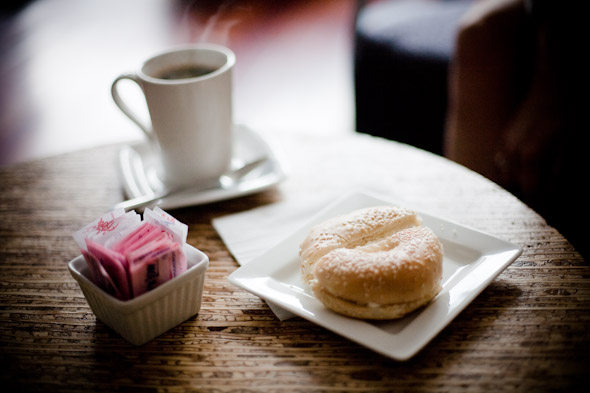 I take a box of sweets home with me, which makes for a fantastic afternoon of intermittent snacking. The chocolate and walnut cookie is somehow even better after being in the fridge, the pools of chocolate hardened into sweet and solid cocoa, the butter refreshing. The flourless chocolate truffle (inspired by her friend's celiac son) is creamy and rich. I feel like Adrienne, shut up in my kitchen with baked goods. The only difference is I have (and love) the Internet, and I couldn't stay here for ten years, even if I wanted to. 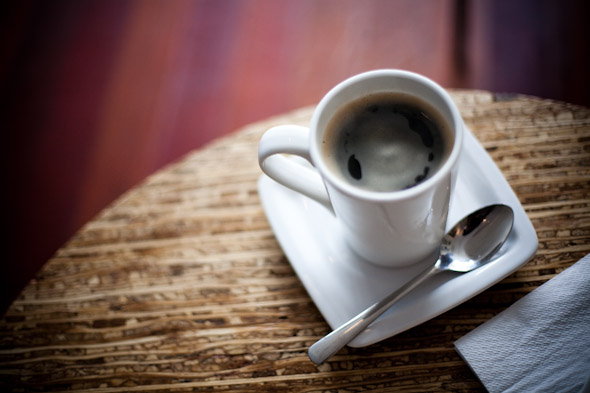 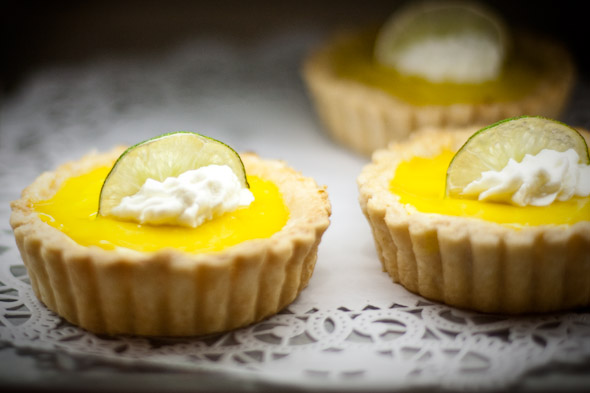 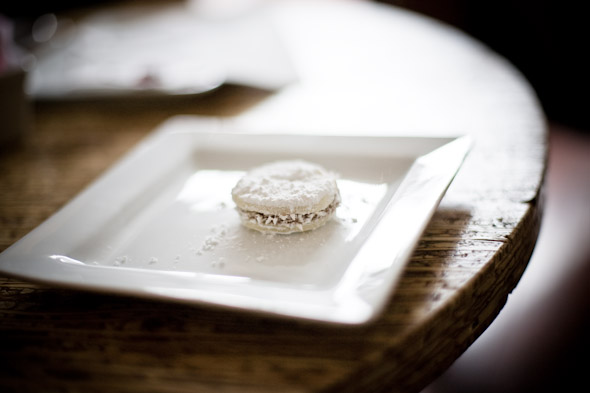 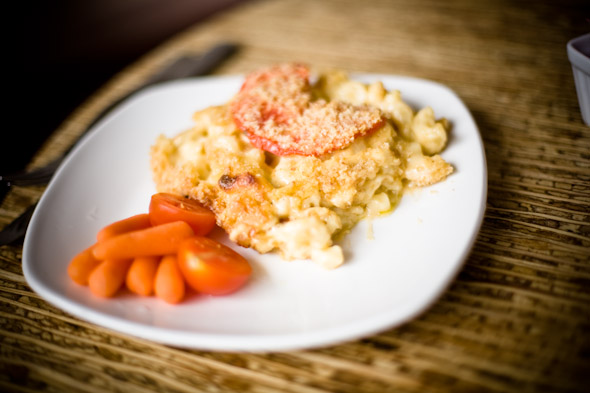 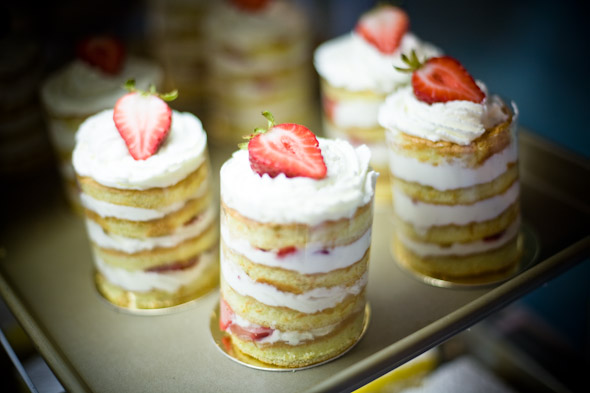 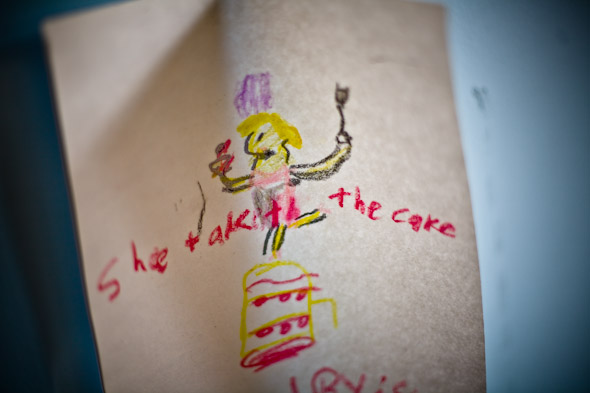