ps by Pretty Sweet is a bit hard to find--those expecting a typical boxy storefront will be surprised by its location in a walk-up house, with the trio of simple but elegant three-tier cakes in the front window serving as its only sign, for now. It's an aesthetic that suits owner and baker Adjoa Duncan just fine: "This store is, literally, everything I am," she says, smiling. 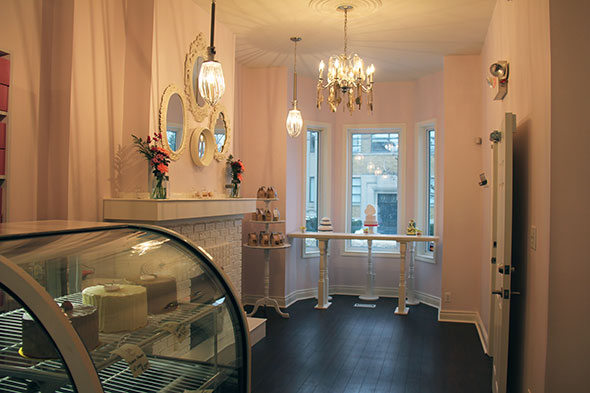 ps is Duncan's first retail storefront, and just a week into its operation, the only things missing are a few stools for sit-down snacking by the front counter. The location is a clear coup, with that mostly residential stretch of King West being largely devoid of pastry shops. Everything is made in-house and from scratch, including the graham crackers for the soon-to-be-added cheesecake's graham crust. 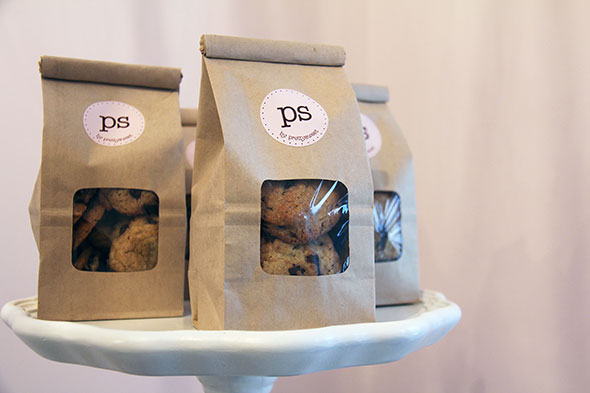 Nostalgia is carried through from the bring-you-back-to-your-childhood selection of baked goods, to the shop's--there's no other word for it-- precious interior.

Almost resembling a young girl's notion of a French patisserie with its soft pink walls, antique framed mirrors (sourced from Duncan's house), white wood accents, and bold pink napkins and pastry boxes, perhaps the most whimsical element is its lighting--hanging bulbs are enclosed in metal whisk-shaped enclosures, and a makeshift chandeliers twinkles with hanging cutlery rather than jewels. 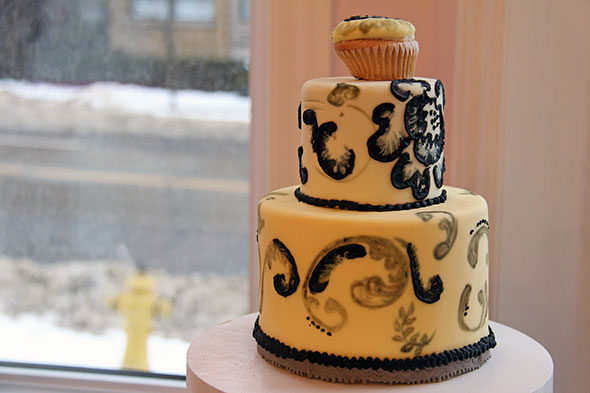 ps was born out of Duncan's long-time custom cake business, Pretty Sweet. From its inception, the tagline was "Create your own indulgence," a mantra that's instantly evident in Duncan's sunny, accommodating disposition. With my own impending nuptials on my mind, we chat about custom wedding cakes, and I'm instantly put at ease by a throwaway quote that seems to encapsulate her philosophy: "I never bake when I'm angry; can you imagine having your first bite of wedding cake and someone was pissed off as they baked it?" 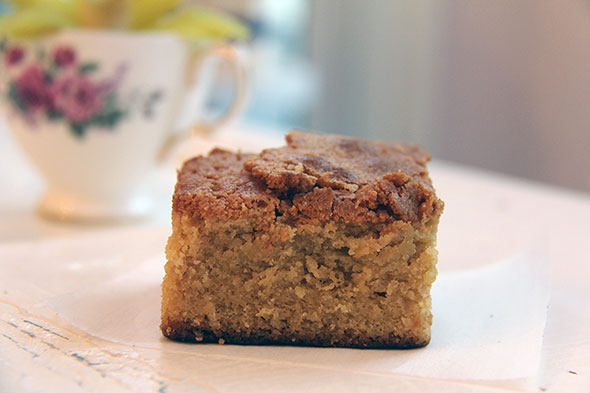 Duncan's love affair with baking started when she was just 15 and has taken her from the restaurants of London, to Splendido , to George Brown (where she realized flour was the smell she missed). She came into her own while working at now-defunct vintage shop Paper Bag Princess during the day: "It was all about where things come from, which is my style of baking. It's like putting on a vintage dress; it brings you back." She began baking cakes for friends' events, and the follow-up requests snowballed, leading her to start Pretty Sweet in 2008.

Duncan has fostered long-term relationships with her clients, and her creations range from simple round cakes to birthday cakes that tasted like apple pie, or were shaped like Tigger or taxi cabs. 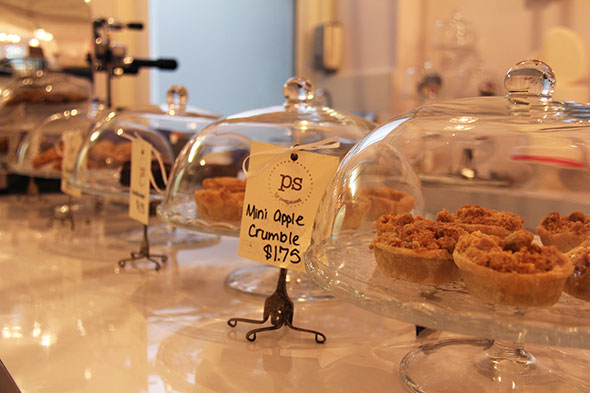 Given her years of experience, I expect elaborate cakes to fill the consummately girly shop, but I'm surprised (and pleased) to find humble, homestyle baked goods spanning the counter. Cupcakes ($2.75) and cakes are sour-cream based, although the chocolate chunk cookies ($1.75) have been a clear best-seller, and for good reason--they're crunchier on the edges than I prefer, but moist and speckled generously with large chunks of not-too-sweet chocolate on the inside.

The cupcakes are sold out when I stop by, but I also sample a blondie and butter tart. The butter tart especially benefits from its thin but crispy pastry shell, letting the rich, thick filling shine through. The blondie is more similar to cake than brownies in consistency, but delicious nonetheless. 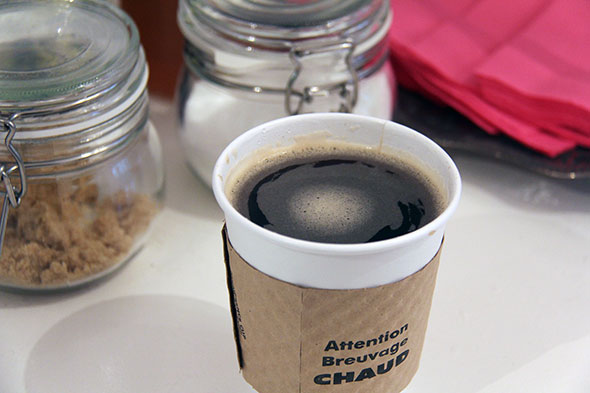 The prices are reasonable as well, with 6" cakes coming in at $23 (the feature flavour of the month is chocolate strawberry), although ordering them custom will likely come with a price hike. Duncan has been known to deliver last-minute orders, but ordering up to a week in advance is preferable. 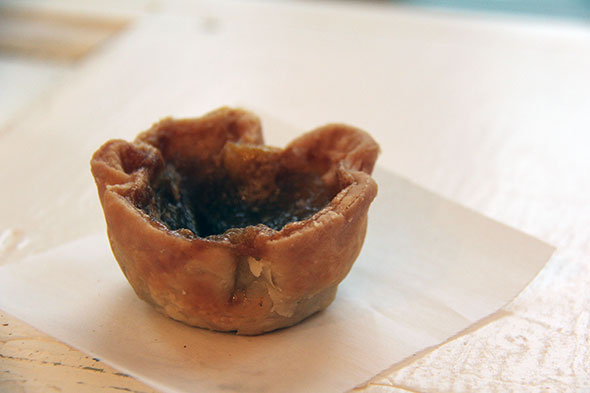 Cheesecakes and mousses costing $4.50, although they come in mason jars, and reusing the jar will grant you a discount. Teas from Tealish from simple earl gray to pomegranate goji ($2.75), and their fair-trade organic coffee sourced from Fair Grounds is $2.50 for an americano or $3 for a latte. 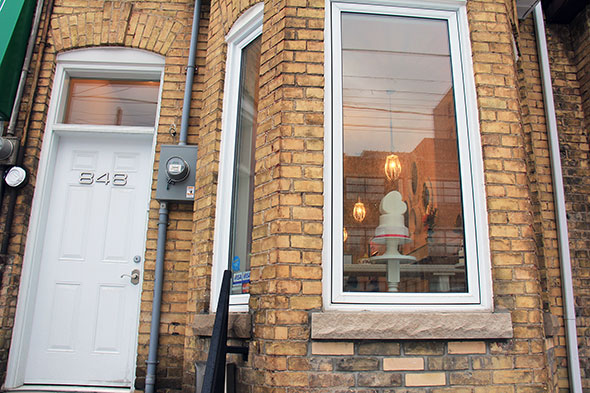 I can't help but ask whether Duncan will test the waters with hot-item bakery items like donuts or macarons, but she humbly says that there are others who specialize in that, and she prefers to focus on the things that mean most to her--"cream puffs might not be a part of everyone's childhood, but they were a part of mine," she says.