"Listen, I'm a pie man," says Tim McConvey, owner of the new Pie Shack in the Beaches . "Me with no pie is like an Esso with no gas." He looks at my friends and me with an expression bordering hysterical excitement and deep regret. There is no meat pie for us to try today at Pie Shack (regretfully), because less than a week after opening, the staff cannot keep up with insatiable customer demand (exciting, especially for a man pushing pie). "I have had to quadruple my order and it is still not enough!" 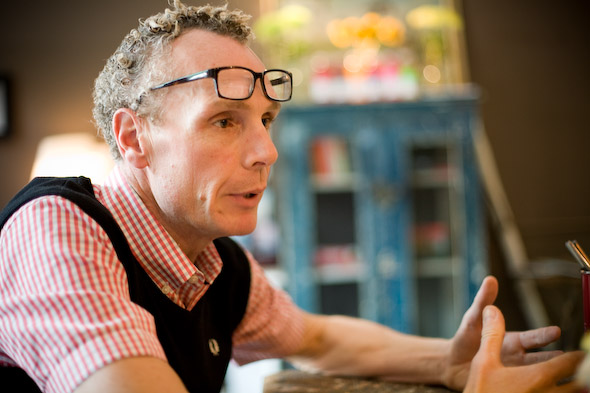 Tim is ordering from Erez and Keren Hadad, the husband and wife team gracing his shop with their pie making skills. They are "perfectionists," Tim reveals, citing the day last week when there was no rhubarb pie because Erez "went to the market and didn't like the looks of the rhubarb." This is the kind of story I like to hear. As disappointed as I was about the lack of savouries - the steak, mushroom and ale or the pork and caramelized onion pies - I scope out the sweet selection (apricot, pear, and peach the day that we went) and feel certain I'm in the good hands of some discerning bakers. 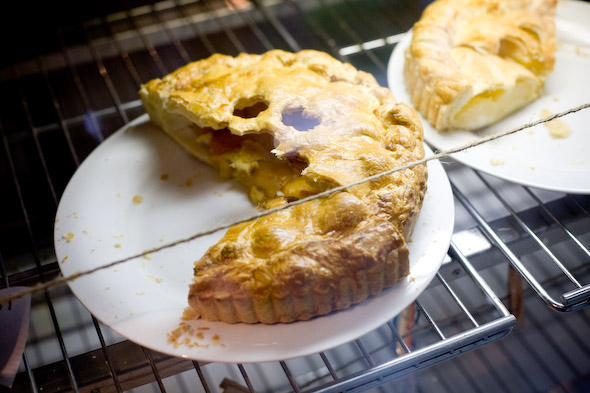 My people take a seat at one of the unfinished wood tables with three coffees (from Dark City ) and a pot of earl grey tea for the caffeine adverse (bless ya, Johnnie, and your sensitive stomach). I take up the menu/info book and peruse the "fun facts" on the back of it - pie related statistics, like eighty-nine percent of Canadians have eaten pie in bed, and three in five people have eaten an entire pie by themselves. "Hm," I say, and "interesting." The pie man notices what I'm up to.

"Do you ever watch Letterman ?" he asks. "He does this thing where he makes up stupid statistics. I was watching the show one night and I thought, 'I could do that!'" "Oh," I say, mildly disappointed. "So all of these are made up?" Tim beams. "One hundred percent." 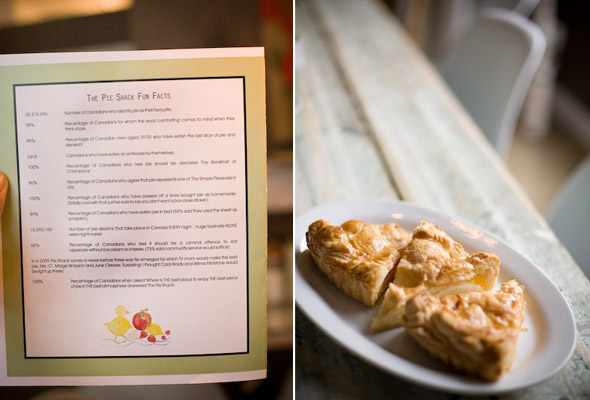 The pie arrives at our table. We're offered vanilla ice cream on the side, and told to help ourselves to more coffee... because the refills are free! (I feel my life significantly improve at the mention of free refills, not just because I can have another cup today , but also because I suspect that this is becoming a trend all over the city.) 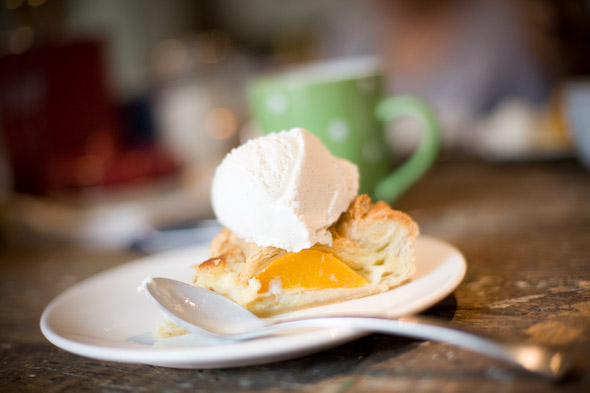 Each of our slices (we've ordered at least one each of apricot, peach and pear) contain fresh, gigantic pieces of fruit. And the crust is something else. It is amazingly flakey and light, fresh and buttery. "I usually don't like pie crust," quips Alyssa (that's right - she came along too). "But I like this."

And be sure it's sitting well in Johnnie's sensitive stomach. 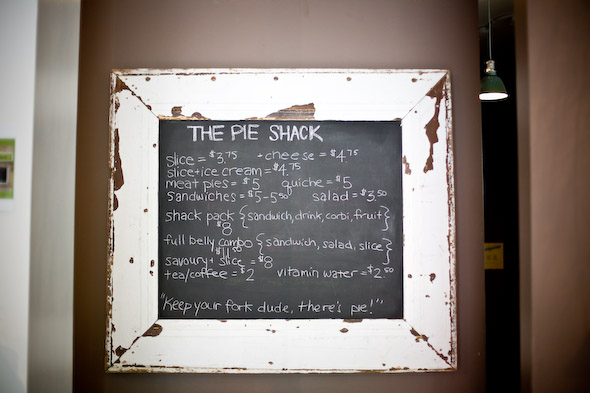 The other half of Tim McConvey's team is Daniel James, and his energy somehow matches the pie man's. "I forced my way in here," he tells me of their partnership. "I knew this place was going to be big." The two of them tell me about their future plans: late nights in the summer (they're already open until midnight on some nights), an antique bike for deliveries (which Daniel has already dubbed "the slicer") and a liquor license (so they can make "pie-tinis"). Most notably, the pair have made plans to construct a mini pie shack (a dog house) out on the sidewalk, for a dog named Campbell who hangs out in the back alley. (And in this establishment, doggie bags go by the name "Campbell bags.") 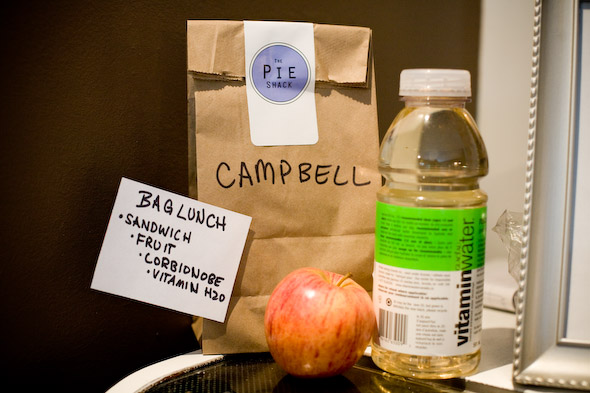 We say our goodbyes and make promises to return for some savouries. The supply logistics will be worked out by then, we're promised. On the way out, Alyssa notices a fishing lure hanging from a shelf in the display case. She snaps some photos of it. "You like that?" says Tim. "I brought it here from home." He points out some photographs on the wall, the (communal) ipod dock, and the antique pie safe (where people used to put their pies, to keep them safe). "Everything here is from home. My place is completely empty right now."

Dude, that's one hundred percent commitment. Good luck to you (as if you need it). 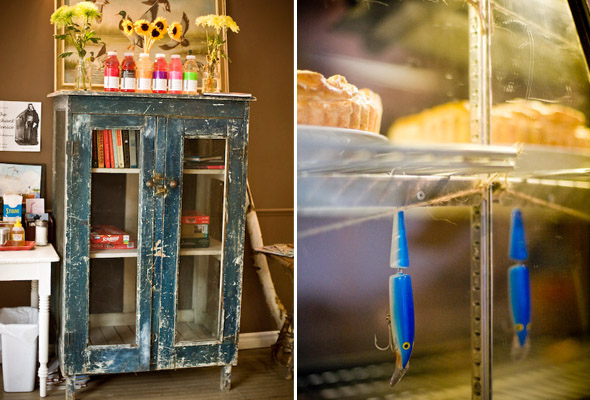 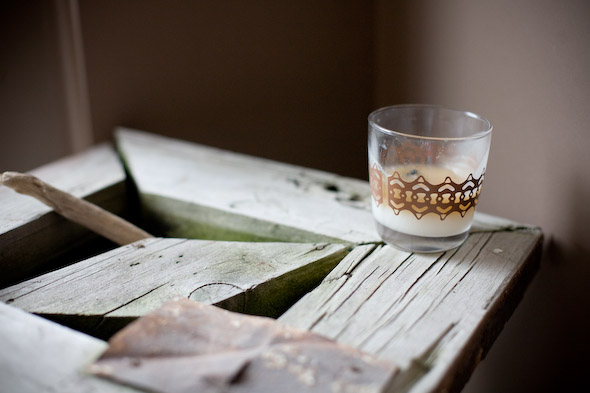 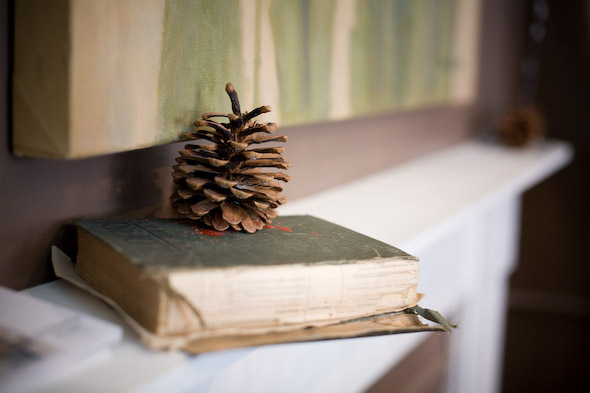 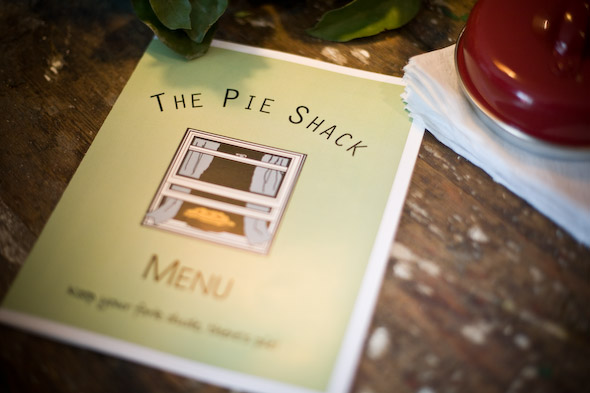 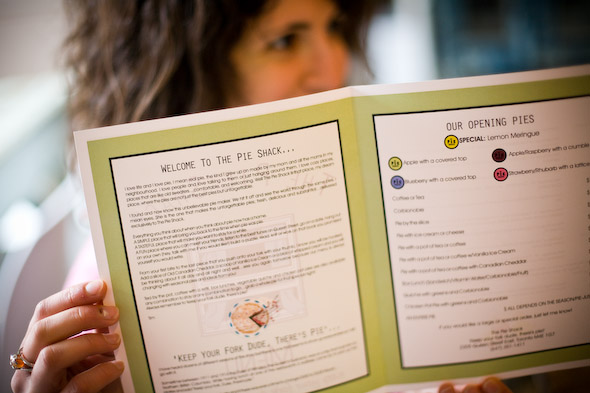 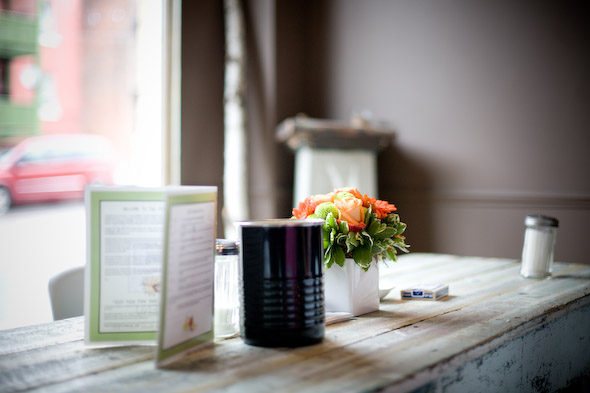 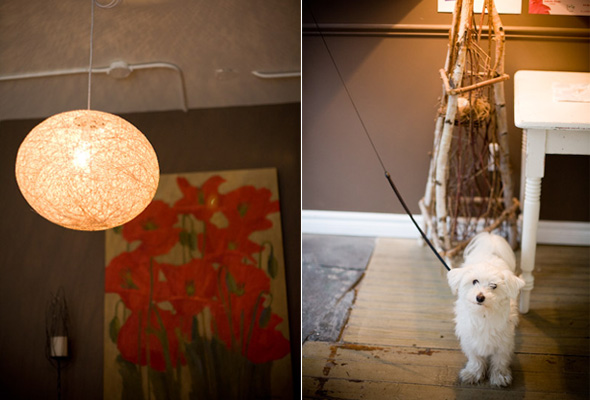