Patisserie Sebastien is located on the corner of Yonge and Fairlawn, just north of Lawrence Avenue. When I stop by for a visit, January sunlight is streaming into the colourful room from all sides, casting light upon rows of French pastries, trays of croissants and baskets of bread behind the counter. 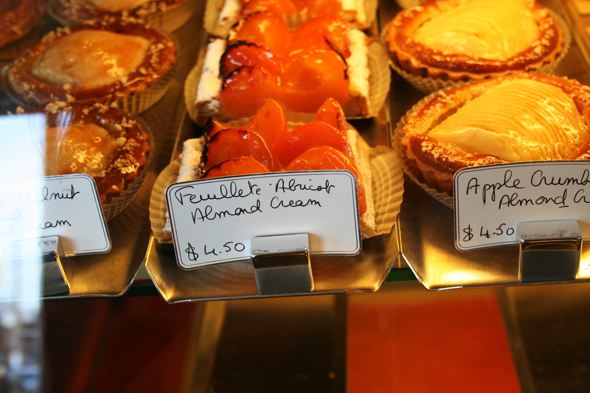 On a warm weekend afternoon, the brunch crowd streams in and out of the shop, some taking seats at one of the six tables and others grabbing paper bags and boxes filled with treats to go. We settle into a spot by the window and I approach the counter to order. Owner Charles Imperiale is patient with my slow but steady French as I order to my heart's content. 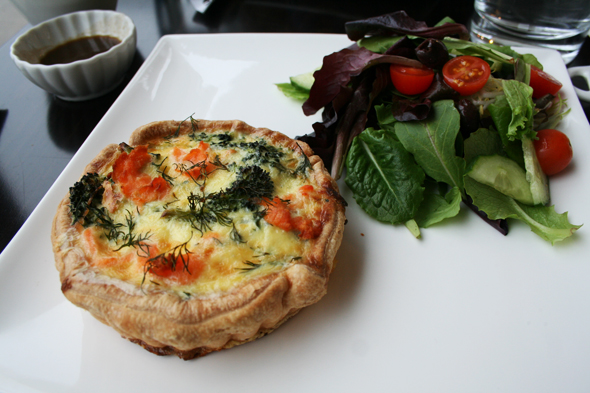 A chalkboard menu announces an assortment of quiches: double smoked bacon and Gruyere; zucchini, eggplant and bell peppers; wild mushroom and Brie; smoked salmon, broccoli and leek. The smoked salmon is my quiche du choix. The delicate hint of dill compliments morsels of smoked salmon and soft pieces of broccoli and leek in a light filling within rich and flaky pastry. Black olives hide in and amongst the mixed green salad with cherry tomatoes and cucumber slices. The portion is sufficient enough for two to share ($7.75). 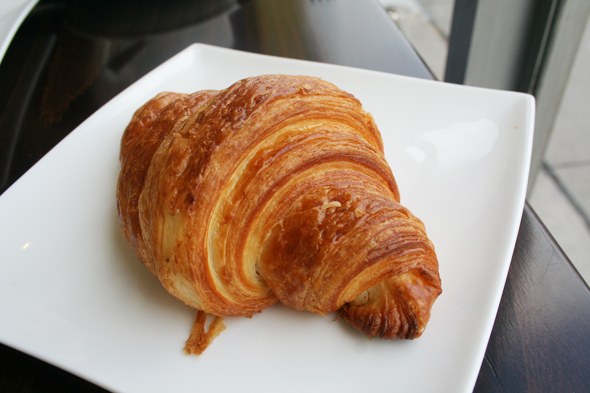 The croissant au beurre ($1.90) sits plump and tall on its plate. A dark, flaky crust and soft insides goes down well with a cup of milky tea, served in a teapot large enough for several cups ($1.70). 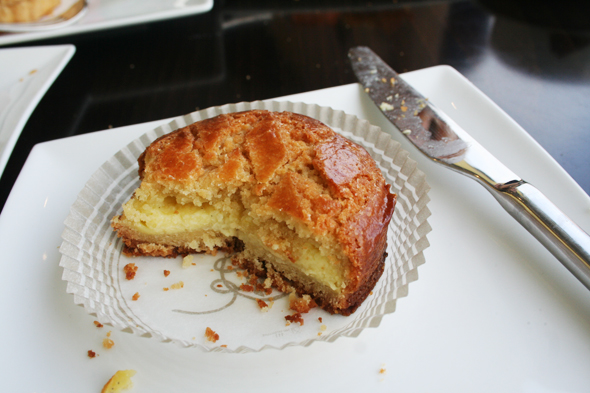 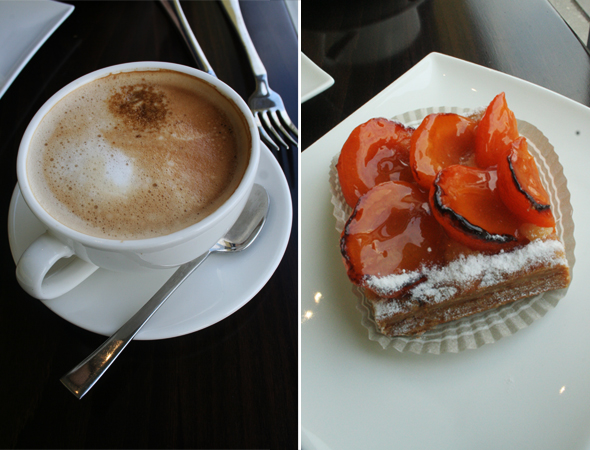 An apricot almond cream tart is summer on a plate: ripe apricot halves on top of almond cream and a delicate puff pastry ($4.50). It goes down nice with a piping hot café au lait ($3.15).

On a second visit to Patisserie Sebastien on a Sunday morning, I bring along another partner in crime and we close our eyes and pick two more tarts to try. 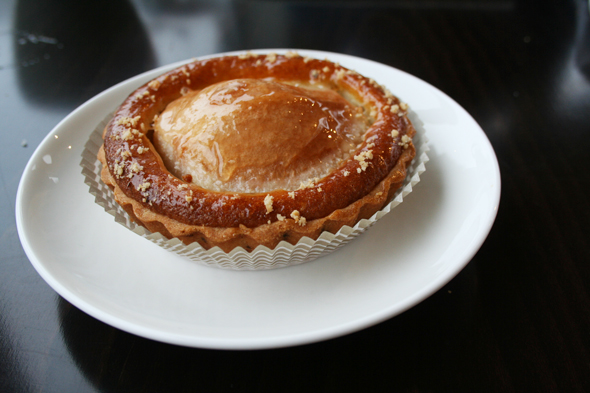 We start with a pear-walnut tart: a luscious ripe pear encased in a fluted ring of pâte sucre . It is almost too beautiful to cut into, but I push my reservations aside and dig in, elbows out for the greater good. The flavour of walnut is wonderfully complimentary to the pear, and not at all too sweet. The apple tart is similarly divine: glossy apple slices fanned out on top of a crown of pastry. Both tarts are $4.75 and a satisfying portion for two. 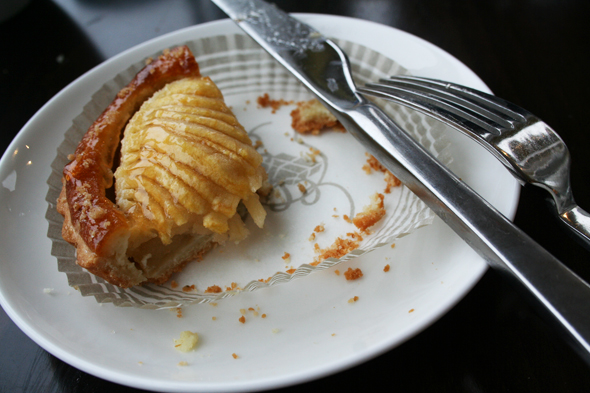 After we've finished the last of the tea, I head to the counter to pay the tab. All but two baguettes have been swept up for Sunday roasts and few quiche remain behind the glass window. I nab the second last multi-grain baguette ($3.25) and at the last minute, a chocolate éclair ($4.75) to go. 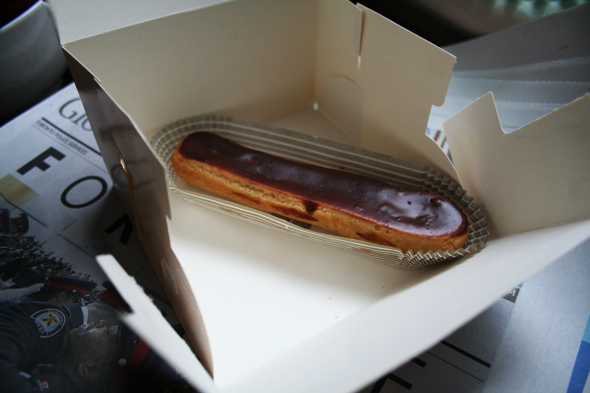 Having waited all week in anticipation for my visit to Patisserie Sebastien, I am not disappointed by the delicious French fare and great service. I am also very happy to make the journey from my downtown hub to this lively strip of Yonge Street (north of Lawrence).

Later that evening back at home, after the dishes are done and the table wiped, I sit at my kitchen stool and enjoy the delectable éclair with cold chocolate filling in three satisfying bites. The fluted paper liner sits discarded on the countertop, and I make a mental note to get two next time. 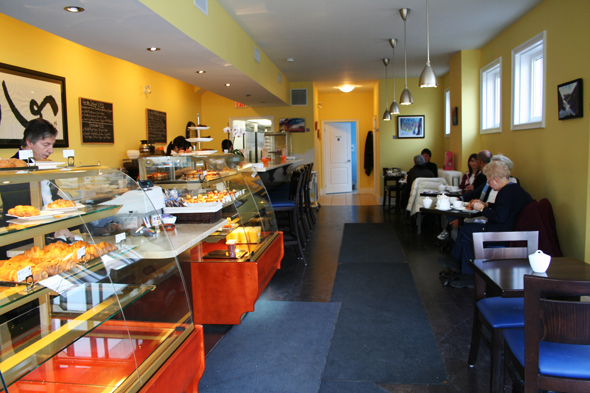