BakeryHaus is located in the Queen Street Market, across from the CHUM building. You know the one - it's always half empty or under construction, with a handful of 'upscale' food kiosks that sell to the lunch crowd or wandering tourists.

Unlike the St. Lawrence Market , which is busy and successful, St. Patrick's can't seem hold an audience. It might be in part because the landlord rents to dubious businesses like BakeryHaus, which sells 'fine European' baked goods, that are neither fine nor European - in my humble opinion. 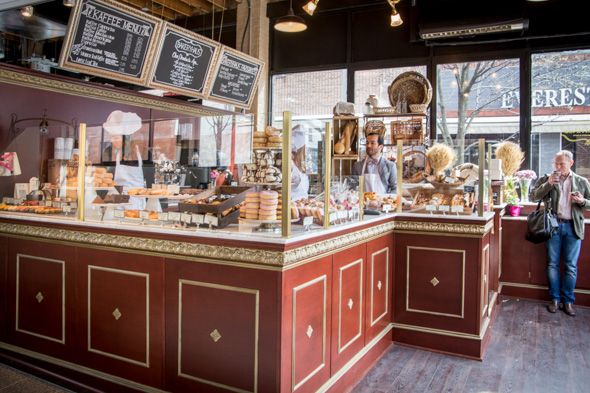 It's not even clear where they do this baking, as BakeryHaus is just a fancy brown counter (no bigger than my bedroom) with products in cello or in trays and baskets. The staff, friendly and bubbly, are rendered totally incapable of doing any actual baking by their clothes; the men are in tight business suits and sleek hair, the women also in professional attire, but are forced to don those silly deflated bakers' caps. 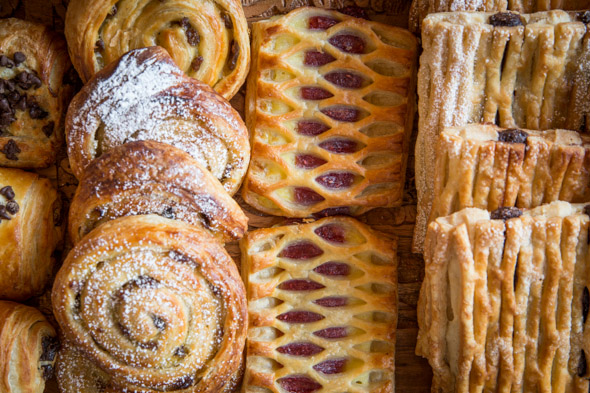 A later look on the website confirmed the initial feeling of hyperbole - descriptions dotted with 'free of artificial colour', 'halal', 'no hydrogenated fatty acids', a strange sounding 'Certificate of Organic Products' (whatever that means) and a series of icons, including "All Our Production plants are audited under BRC Global Standard for Food Safety" - which just means a third-party health inspector shows up.

It reminded me of when the great food writer Calvin Trillin pointed out the trend of "la Maison de la Casa House" in the '80s, and the way those establishments rode on a vague definition of international food, equating sophistication and taste with the merest suggestion of France. 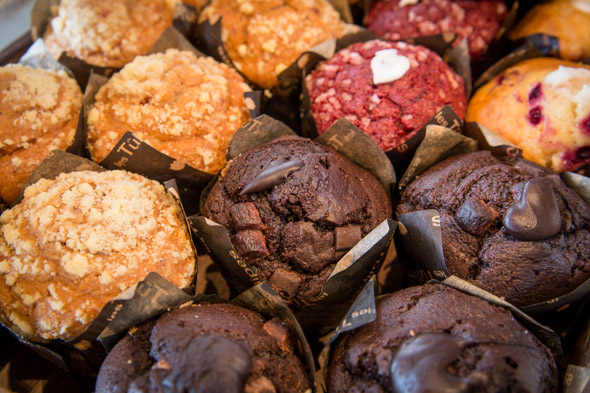 This is not to knock Europe. Without its grand traditions and recipes, where would any bakery be? But in a city filled with fantastic bakers and chefs, knowledgable eaters, and quality local wheat and ingredients, why anyone would continue defer to Europe (recipes and tradition aside) is beyond me. They sell the Cronut ($2.99) alongside those pretty Viennoiseries (from $1.99-4.99) for goodness sake. 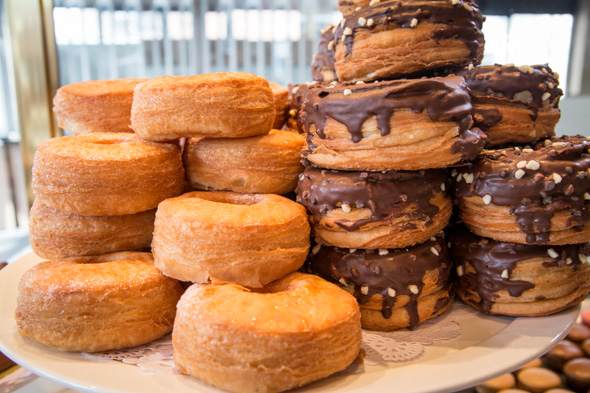 Croissants, pain au chocolate, and palmiers, among others, are available for around $1.99 each. And the highly touted 'Tulip' muffins, I learned, get them name from that fancy way of folding the paper cup - wow - and ring in at $2.99. They come in many flavours - cheesecake, apple cinnamon and cranberry yogurt are just a few. 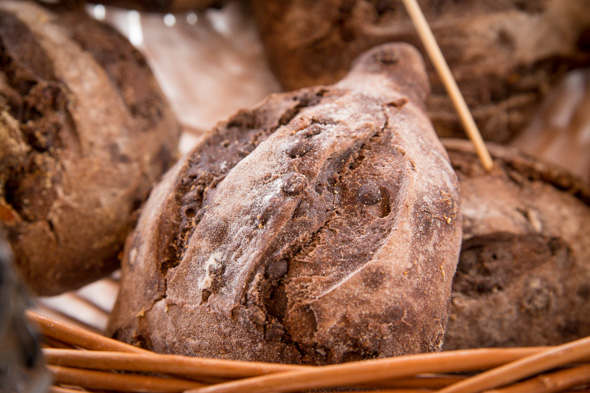 The thing is, so long as BakeryHaus' products are good, who cares? I mean, Dufflet's has a production plant (though she didn't always, it wasn't until she went country wide that production exceeded her early staff). You can tell BakeryHaus aims for a similar trajectory, as there's opportunity for franchises (no bakery experience needed) and yet that little location isn't even weeks old. 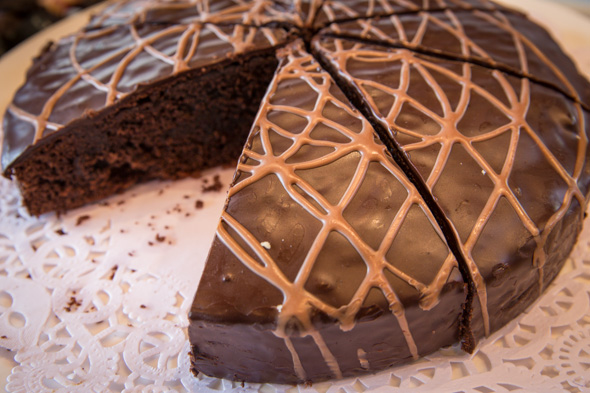 That's where the real problem comes in. Everything looks pretty and suave - a rather nice-looking chocolate torte comes by the slice ($4.99), and the baguettes and multigrain loaves ($4.99) sit jauntily on a shelf - but taste is something else. I ate some macarons and donuts; since they're the most prominent things on offer I figure they have to be good. While the meringue is a little grainy with the ground almond, the macarons (mini/$1.99, regular/$2.25, jumbo/$4.99) are overall tasty, due in part to the heavily-piped fillings of jam, buttercream and caramel. 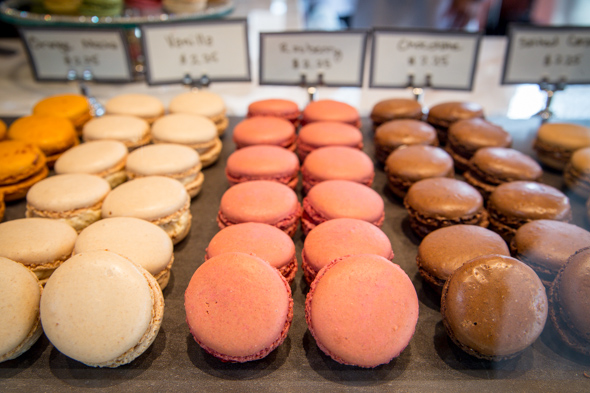 But the donut, a variation that was injected with Nutella and dunked in Belgian chocolate, was awful. The chocolate crust tasted chemically, while the dough was dense and flavourless, and the whole thing left a truly worrisome waxy residue on the tongue that stayed for an hour. 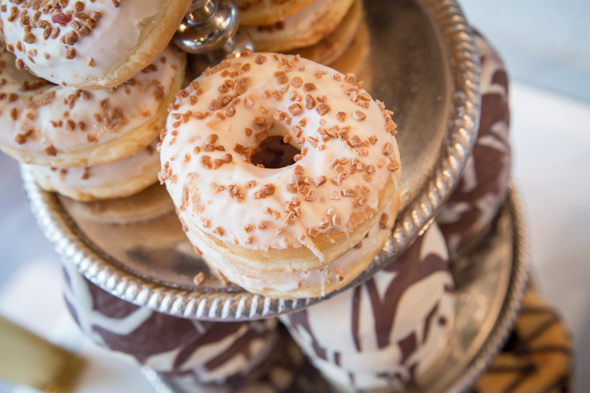 Until BakeryHaus gets out from behind the fancy talk and company manual and gets hands dirty with real baking, it, and Queen Street Market, is set for another failure to launch. 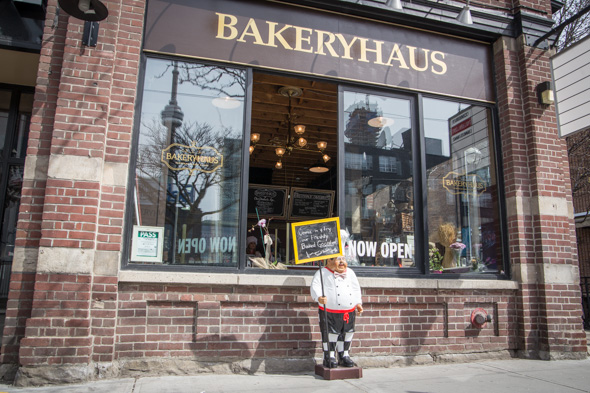