Stargazing at the David Dunlap Observatory

When I was young, quite young actually, my Dad bought me a telescope. It couldn't have cost more than about $100 and was probably about as effective as holding a magnifying glass up to the sky, but regardless, warm summer evenings up at my grandparent's cottage were spent out on the deck with him, looking up, deciphering star charts and trying to make sense of the seemingly random light show overhead.

The night sky on the shores of Canal Lake, just outside Bolsover, is black — pitch black, save for the billions of tiny pinholes puncturing the sky. It's 100km away from anything that could even begin to be considered a major city and with no light pollution, and the calm of the lake laid out in front of you, it was the perfect site to stare upwards in awe.

It was a short-lived hobby, but it left me fascinated with outer space. Many years later, with that memory in mind, I took a first year course on the subject at Carleton University. That decision, however, turned out to be misguided. It turns out university level astronomy is much more science than philosophy, and "awe" doesn't get you grades. It's chock full of math and equations and chemistry, when all I wanted to do was look at stars.

So, it was with that memory in mind yet again a decade later, that I skipped all the hard science, borrowed a car and took a drive out to the David Dunlap Observatory in Richmond Hill. 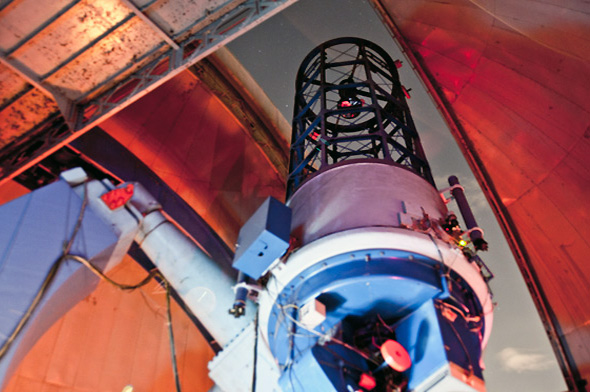 Every Saturday evening, from July to October the observatory opens itself up to the public. The evening begins with a talk, something fun and interesting, but easily digestible for mass consumption. Then afterwards the crowd is invited to take advantage of the facilities and look to the heavens.

The talk I attended was titled "Mars Attacks," a brief history of our cultural obsession with the Red Planet, both in science, science fiction and popular culture at large. The speaker, Michael Lennick, used slides from various movies to talk about what it might be like up there and the probability of the red dust ever mixing with human toes.

It was fascinating and fun, but it was really only a precursor to the main event. The David Dunlap Observatory, I'm told, houses the largest open-to-the-public telescope on the planet. Back when it was built in 1935 its 74-inch mirror made it the second largest telescope in the world.

So, after Michael Lennick wrapped up the discussion, we all headed out of the main building and over to the steam-punk dome where the telescope lives.
The crowd is a mixture of tourists, young couples on dates and families with fascinated children who — despite me having 20 years on them and first year astronomy under my belt — know waaaay more on the subject than I do. 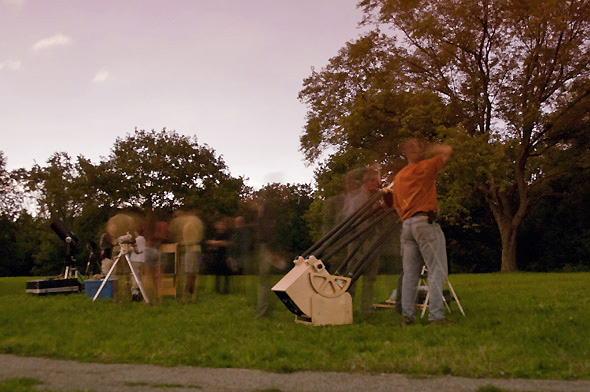 Outside the giant dome a trio of amateur astronomers set up their telescopes for public view — this is the wonderful b-side to the evening. Besides housing one mammoth telescope, the DDO has become somewhat of a gathering place for enthusiasts and as a result, a wealth of knowledge congregates on Saturday evenings on the front lawn, just outside the dome.

Here we're given the opportunity to look at star clusters, planets and whatever else is in view on any given evening.

Inside the giant dome, I encounter the enormous 28-ton telescope that was once among the biggest and best on the planet, but even to this day (73 years later) remains the biggest in Canada. It's an impressive site even on a cloudy day, but on this night I'm lucky that the weather is cooperating and the stars are out. 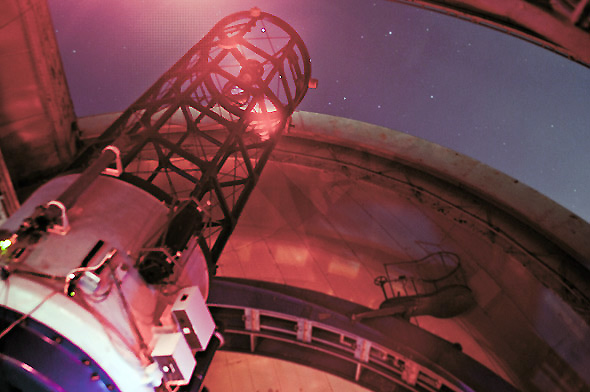 The giant scope is pointed to the southern sky, while the clouds have been kind tonight thus far, the cloud cover is moving in and our options are becoming scarce. Tonight's subject is a small star cluster that to the naked eye simply looks like a twinkling pinpoint of light. One by one everyone takes their turn, climbing the ladder and peering through the eyepiece. When my turn comes I make the same procession up and look through.

You'll won't see anything that can compare to those Hubble images of deep space, but pressing an eye up to a 73-year-old machine and seeing a small point of light in the night sky transform into and entire cluster of stars, shimmering blue and red is something that, even now, is enough to capture the imagination.

It translates so easily to all those cliches: our own insignificance, the possibility of extra terrestrial life — everything races through your mind. It's impossible to ignore, just the enormousness of it all.

It might be the science that informs astronomy, but it will always be that state of awe that inspires it.