The White Squirrels of Exeter

White squirrels do exist. But only rarely in Toronto. You're one of the lucky few if you've caught a glimpse of the white squirrel of Trinity-Bellwoods Park in Toronto's west end. In spite of my best intentions, I have yet to see one.

Megan at the White Squirrel Cafe across from Trinity-Bellwoods Park says white squirrels sightings are most likely around 7 a.m. near the corner of Shaw and Dundas St. W. Last week she saw two white squirrels together. There may even be a third white squirrel in the park.

Unsatisfied with my chance encounters with an albino squirrel in Toronto, I took a day trip to Exeter, Ont. where white squirrels are not only the town's mascot (Willis The White Wonder), they're there in abundance. Or so I thought. 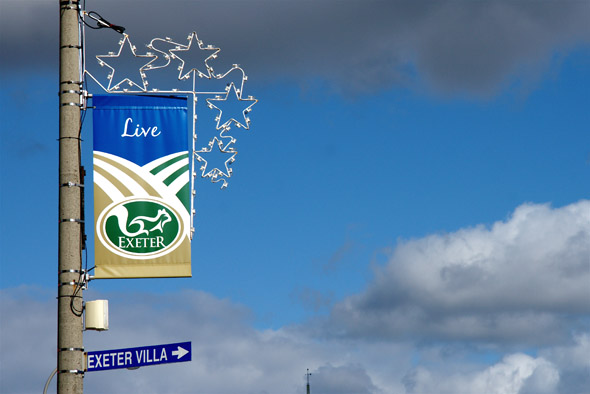 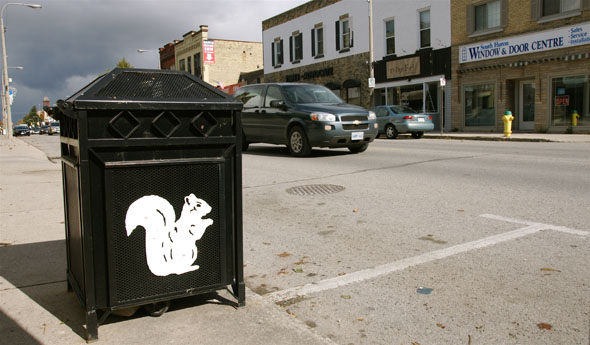 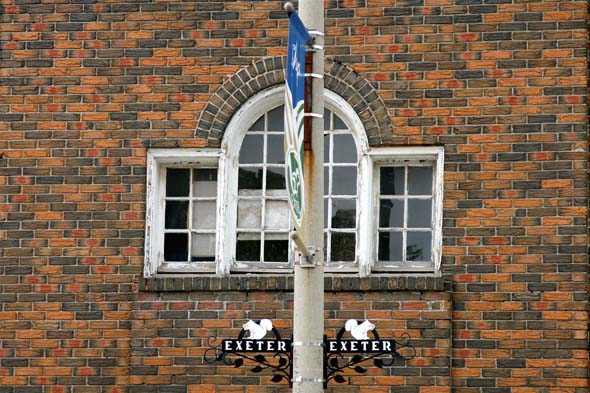 The origins of Toronto's white squirrel(s) remain a mystery. One theory is that a white squirrel hitchhiked on the back of a truck in Exeter, bound for Toronto. But that doesn't account for the difference in type of white squirrel. The white squirrels in Trinity-Bellwoods have red eyes, making them albino squirrels. 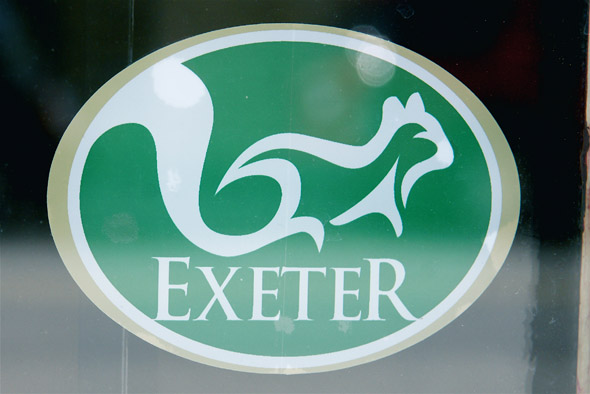 The white squirrels in Exeter aren't albinos. Thought to be a genetic mutation from centuries ago, they frolic in the backyards and parks alongside their grey and black brethren. Technically, they're all Eastern Grey Squirrels, but due to a different amount of melanin, the squirrels that predominate Toronto, and most of Ontario, appear black. 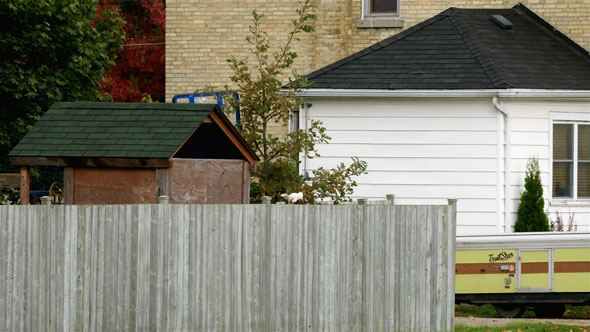 After about an hour of stealthily hunting the cute, furry creatures in vain, I took a pee break at the Esso station. I quickly whipped out my camera just in time to catch a glimpse of one awfully agile white squirrel darting across the fence across the street. 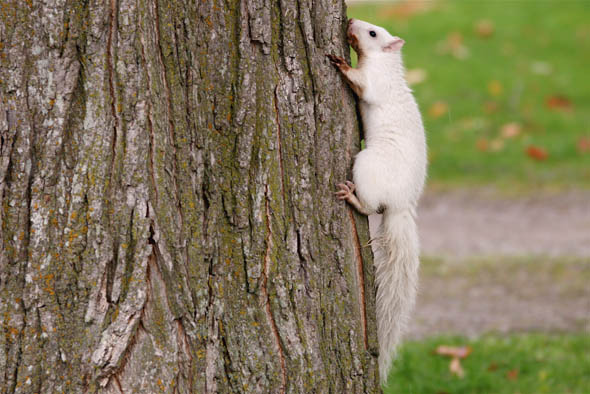 I followed the white squirrel with my telephoto lens, hoping to get a closer glimpse but it was gone. Moments later it reappeared on the front porch of a nearby house. Before long I spotted another white squirrel nearby, appearing to kiss the tree it was climbing. 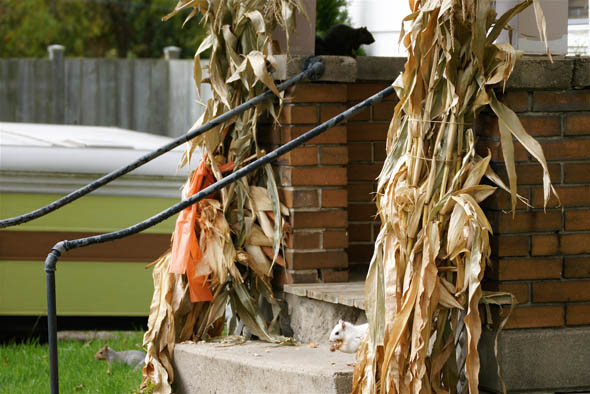 I hung out by this house at the corner of Simcoe St. for several minutes, stalking the little white wonders. Turns out they get along just fine with the black and grey squirrels of Exeter. Can you spot all three in the photo above? 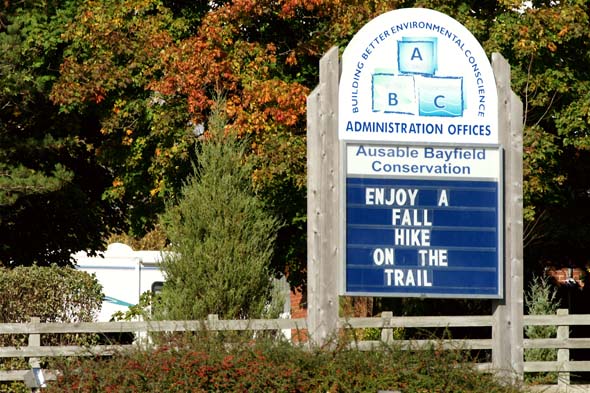 Not content with this happenstance, I ventured further afield into the Ausable Bayfield Conservation area, starting at McNaughton Park, where white squirrels are said to roam free. 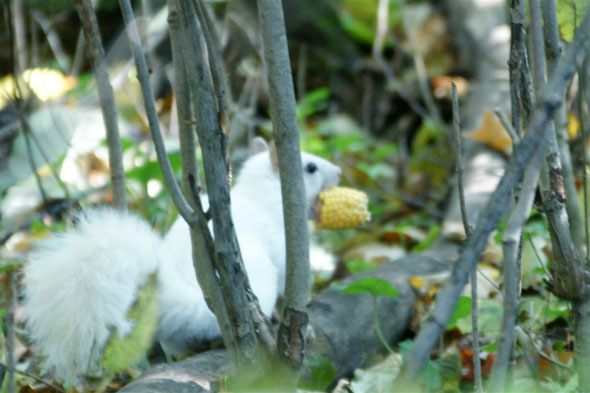 It takes a lot of patience and stealth to capture white squirrels in their natural habitat. They're not as prevalent as the black squirrels in say, Toronto's High Park. Eventually I found one munching on a cob of corn from the adjacent corn field. 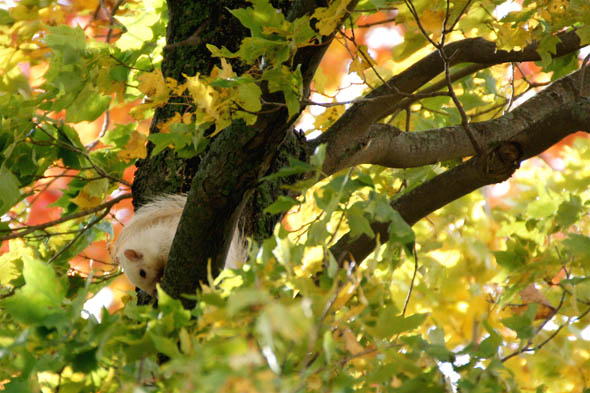 A little further down the path, a startled white squirrel leaped in front of me and scurried up a tree, where I caught a glimpse of its bushy, white tail.

I counted six white squirrels throughout my afternoon jaunt in Exeter. It was well worth the two-and-a-half hour drive to see more of these rare squirrels frolicking about. It made for a fun little autumn road trip. 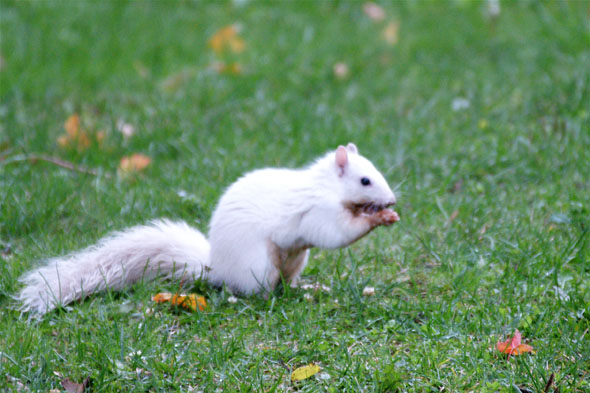