GTA Tripping: Take Me Out to the Bike Polo Match

Like elephant polo, bike polo sounds like something exotic but impractical. To the uninitiated, like myself two weeks ago, it logically exists in our minds like one of the many other compound sports on the fringe: soccer-baseball, disc-golf, or hunting-dodgeball.

If you've never seen a bike polo match, let's try to imagine it for a moment: hipsters, facial hair, fixed-gear bicycles... check. Beer, cigarettes, home-made polo mallets... right. But did your imagination imagine that in reality bike polo is full of epic crashes and awesome plays? Or how about style and swagger, the two magic ingredients in any indisputably watchable sport?

This was my world last week as I watched my first bike polo match at Bathurst and Dundas's Scadding court. 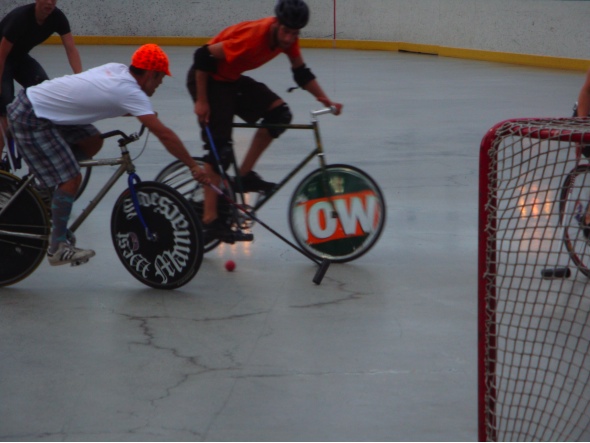 I like pretty much all sports, but if a sport allows for style and swagger, I like like it. Take basketball for instance. All that dribbling I could take or leave, but when a seven-foot guy sails over five other dudes, fakes us out mid air and then does something called a "slam dunk" and follows it with some kind of dancing, that's style.

Or rugby. Have you ever seen the All Blacks' haka? It's a dance performed before the rugby match begins, and after the other team sings some cute tune like God Save the Queen to get in the mood, the All Blacks from New Zealand do a Maori war dance that often includes pantomimed throat slashing.

Or golf. Everyone's already wearing sunglasses, which is cool, but take a player like ﾃ］gel Cabrera. I love this man. Here's a guy who plays a sport that counts millimeters out of miles and he looks like a Latin-American Rodney Dangerfield. He only butts out his cigarettes to raise Masters trophies, and he doesn't speak any English because he doesn't need it. That's swagger. 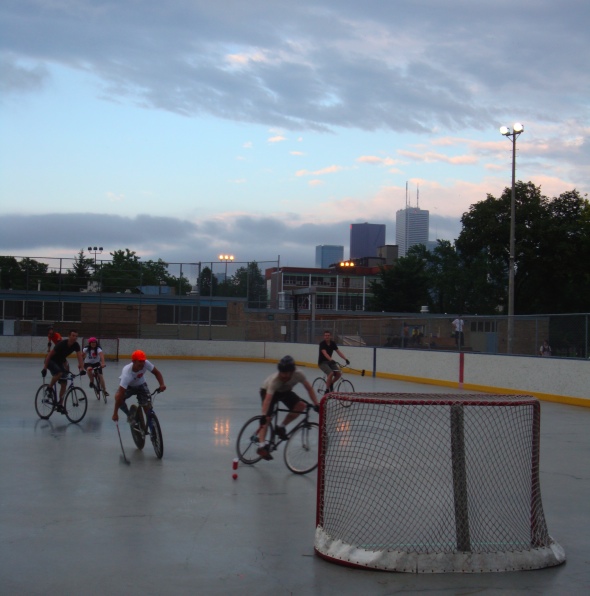 At the bike polo match we witnessed this exact kind of attitude and energy. Among us there were probably only four or five others watching the game, all passers-by stopping to gawk at this athletic (and anti-athletic, in the Cabrera style) curio. But each was glad to have stopped, and their eyes were glued to the action. The matches were fast, tough, and full of acrobatics including a few hero plays in which a player would take an epic spill to score the goal, the mini-crowd erupting in applause.

When I learned that a few of the players that day were actually in town from parts of the USA, I was surprised that the fans in the stands were so few. A contender for the poorest-attended international sporting event of the summer for sure. But that's part of the whole thing with bike polo.

Despite having existed in some form since the 19th century, when it was invented in Ireland, and despite the new version ("hardcourt bike polo" - what we saw) growing quickly in popularity, the game remains a DIY pursuit.

Which is just fine with the guy I went to the game with. If the sport were, say, NASCAR-famous, there would be sponsors and everyone's bike would be some ten thousand-dollar graphite douchemobile. But as it is, everyone's bike is their own construction, a labour of love and of competition and a real extension of a player's strategy and sportsmanly style (and, in the case of some of the more flamboyant bikes, swagger).

And this is important to my friend, who, like many men with a little too much time on their hands, is a gear head. He is obsessed with bikes and the decisions people make when buying/fixing/altering them. While I was keeping score and rooting for which ever team had people I knew on it, he was scrutinizing every geared machine, carefully weighing which ones were fixed, which were free, which were good, which were bad, the status of everyone's brakes and, most importantly and vocally, the various psychologies that would motivate such decisions. One player had a single brake lever controlling both the front and back breaks. This was big news and added to the fun.

We'll definitely be back to watch this group of players on a future Tuesday, Thursday or Sunday. Even if I'm the only one in the crowd, I'll paint my face, raise a beer and maybe incite a one-man riot for these guys and their sport. 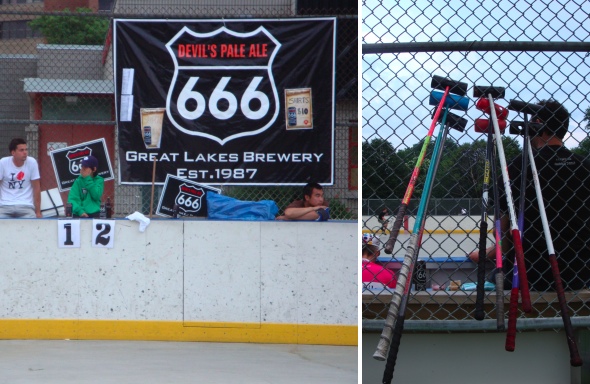