Carried away on the crest of a wave rises at Tarragon

It has been almost ten years since one of the world's worst natural disasters, the Indian Ocean earthquake and tsunami of 2004 which claimed over 250,000 lives. Playwright David Yee walks towards the shore and looks deep into the tragedy to find lost stories and fragments of memories in carried away on the crest of a wave.

The play is composed of short vignettes which serve to illustrate how far and wide tragedy can spread from one event. Yee takes an ambitious global approach, crossing continents and weaving through families, that has mixed results. While strong segments reverberate through a mesmerizing set from Camellia Koo, others are less successful under the weight of dark, dramatic plot reveals.

What stands out most prominently is the mixing of different genres (myth, magic realism, gangster cinema) in an attempt to snapshot the events emanating from the devastating effects of the tsunami. The scientific introduction gives way to a number of emotional stories, which take place in a flooded home, a church that miraculously survived unharmed, two different brothels, and a number of transitory spaces in between.

The tense interaction between a Catholic priest (Ash Knight) and a Muslim engineer (Kawa Ada), is one of the more developed scenes. After the congregation claims a set of blessed rosary beads prevented them from harm, the engineer and the priest traverse the battlefield of faith, science, and tolerance. It's a powerful and believable exchange and the stakes couldn't be higher.

Also memorable is the segment with a controversial Toronto DJ (Richard Zeppieri) who uses the tragedy as a means to assault pop artists looking to capitalize. The entitled insensitivity is pushed to the fullest degree. 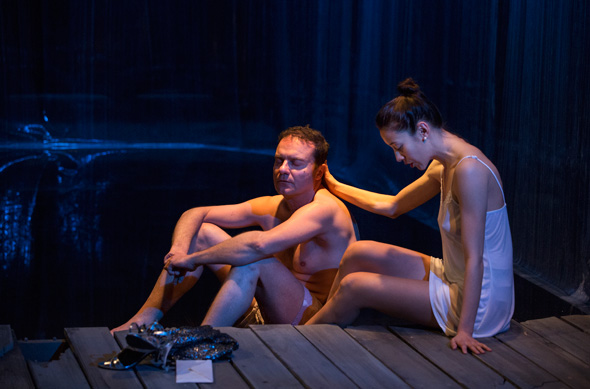 Major plot climaxes, sometimes hinging on a reveal, often come too furious in the span a vignette has to build momentum. While audiences have come to expect these dramatic turns, the ones featured here — suicide, child abduction, amnesia — bloat the already vast collection of stories. The reunion scene in the brothel and the FBI interrogation, for instance, border on melodrama. Losing these scenes would elevate those that work.

Director Nina Lee Aquino links together the stories using music from Michelle Bensimon on Koo's haunting set. The sheets of plastic that stretch the height of the stage give the impression of a towering wave. The actual water that streams in makes for a wet playing space. It's one of more striking sets you'll see all year.

The ensemble is generally strong, although the quick changing material doesn't allow for much character development.

Like the ocean tide, carried away on the crest of a wave is always confident, but ebbs and flows along the way.

—
carried away on the crest of a wave, written by David Yee and directed by Nina Lee Aquino, runs at the Tarragon Theatre until May 26.