Shakespeare's Halmet is often criticized for his inability to act, for the gripping melancholia that paralyzes his thirst for revenge. In the ballet, however, Hamlet is never inactive — dance just doesn't much lend itself to melancholia. Instead, the dance seems to reflect the various levels of the character's inner thoughts and subtext (something we don't see in the stage version).

It makes for a bold and moody ballet whose dark undercurrents make their presence felt in a contemporary score and choreography. Guillaume CÃ´tÃ© gives an inspired and emotional performance as the title character. While there are certainly moments of strength, the dark treatment leaves little room for levity. The result is that the work, at times, seems swallowed up by its own grief-fueled tone.

You'll know Hamlet by now. The King of Denmark returns as a ghost to inform his son that an act of regicide was committed. The title character must then decide if and when he should revenge his father's death by killing his uncle. He also falls for Ophelia (Heather Ogden), daughter of his uncle's trusted adviser Polonius (Jonathan Renna). It's a tall order for such an intellectual character.

John King's score will be the most divisive piece of puzzle. It's a diverse combination of brass, percussion, and electronica. But it's one of my favourite elements of the production. It's keeping with the spirit of the play — fragmented, schizophrenic, and youthful — but it also makes for an exciting aural narrative. Like most elements of the production, it hits its stride in the second act. The hushed reverberations and jazzy notes punctuate the right moments. 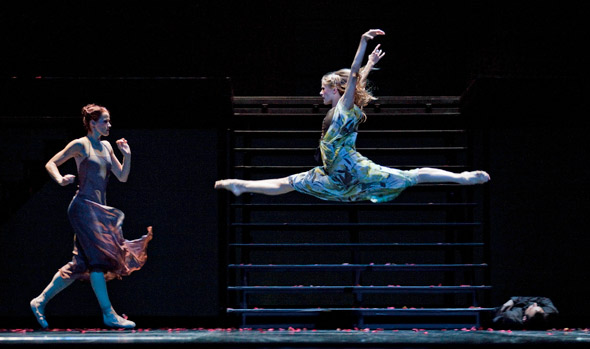 Choreographed by Kevin O'Day, the steps fall in tune with King's frenetic score. The sexually charged dancing of Gertrude (Stephanie Hutchison) and Claudius (Jiri Jelinek), the ups and downs between Ophelia and Hamlet, and the playful but deceitful steps of Rosencrantz and Guildenstern (Robert Stephen and Christopher Stalzer) all reflect the characterizations that Shakespeare set to paper.

CÃ´tÃ© drives the production with a focused intensity. Not only is he physically a great embodiment of the tortured son, but his lyrical steps translate the character's inner strife. With Romeo and now Hamlet, CÃ´tÃ© demonstrates that he's an expert principal dancer. Ogden is a memorable Ophelia. She angelically floats and flutters to her untimely death.

So much time is spent in the first act establishing Hamlet's grief, as well as introducing each and every character, that the act drags slowly along. The scene opening the second half, with the travelling dancers (Elena Lobsanova and Dylan Tedaldi), is one of the strongest in the show and serves to drive the play towards its eventual conclusion. Some levity from the gloominess, not exactly achieved in the gravedigger scene, would have helped balance the dark tone.

When the elements come together, before the otherworldly set by Tatyana van Walsum, the stage pictures achieve the darkness of the original play.

Hamlet, with choreography by Kevin O'Day and score by John King, runs until June 10 at the Four Seasons Centre for the Performing Arts.