Bring It On not as bad as you might think

There's no need to pussyfoot around it. The practice of translating popular film to stage musicals has become so rampant, not to mention poorly done, that you've already chalked up Bring It On: The Musical as another in a long line of bad productions out to steal your money. Well in some respects, you'd be right — the plot is predictable, the ultra-skinny cheerleaders are peppy, and the music not all that memorable. But it's not as bad as you might think.

The production has a number of things going for it that help elevate it beyond the fray of cotton candy musicals. Take, for instance, two of the more memorable characters: Bridget (Ryann Redmond), a pudgier sidekick to the protagonist whose self-confidence blossoms and La Cienega (Gregory Haney), a drag-queen who's firmly part of the banging dance crew.

Glee-inspired it may be, but these surprise bursts of comedy from characters outside the traditional mould, together with impressive acrobatics, help balance the more than lacklustre elements of the musical. Jeff Whitty, whose script borrows from the film but starts a fresh, finds the funny in the formulaic.

The premise follows head cheerleader Campbell (Taylor Louderman) who must unwillingly move from Truman High, where she's the captain, to Jackson, where there isn't even a cheer squad. After she discovers her replacement at Truman, Eva (Elle McLemore), orchestrated the redistricting of her house so she could take over (omg!), Campbell recruits the Jackson dance crew to team up for the national title. 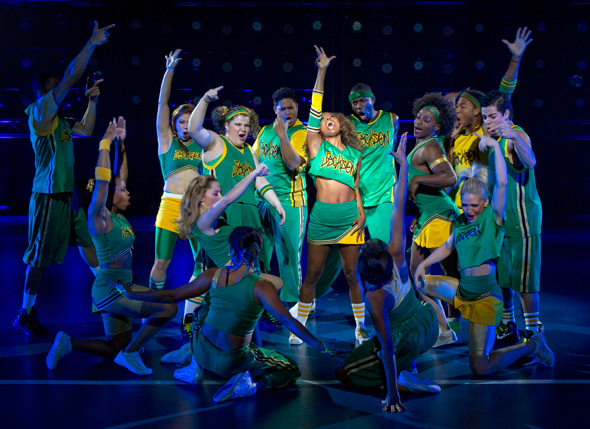 The opening scenes at Truman, which feature the stereotypical cheer personas that serve as the foil to those at Jackson, are the stiff routines you'd expect. It's not until Campbell moves schools and the music adopts a hip-hop flavour at Jackson that the show slips into second gear. Here, everything is better — the music, the performances, the comedy, and the dancing.

Dance crew captain Danielle (Adrienne Warren) deflates Campbell's bubble gum charm and Redmond as Bridget and Haney as La Cienega (mentioned above) give extremely memorable performances. Less successful is the romance between Campbell and "cool guy" Randall (Jason Gotay). They have about as much chemistry as a football coach and the school nurse.

There are a few enjoyable group songs from Tom Kitt and Lin-Manuel Miranda. The flips, throws, and pyramids, along with athletically-inspired choreography from Andy Blankenbuehler no doubt provide a boost of spectacle to a medium already full of wow factor.

While the set design dully relies on four rotating video screens to set the mood, the lighting and costumes make up on the visual end. While not the freshest movie-to-musical adaptation, there's a lot to enjoy in this cheerful production.

Bring It On: The Musical, with Libretto by Jeff Whitty, music by Tom Kitt and Lin-Manuel Miranda, and direction by Andy Blankenbuehler, runs at the Ed Mirvish Theatre until June 3.