Bliss peels back the thin veneer of celebrity culture

Upon first glance, Olivier Choinière's Bliss appears disguised as a satirical look at the cult of celebrity as seen through fan devotion to the music of Celine Dion. While that's part of the story, in an expert translation by Caryl Churchill, there's much more going on beneath the surface.

Choinière's play is undeniably thought-provoking in its head-on exploration of celebrity obsession. The text moves full force from one character to the next, pausing only to let the gravity of their circumstances settle. While it, at times, feels as if the script is moving too rapid for the actors, the moments penetrate nonetheless.

The power packed narrative intertwines moments in the lives of three female characters: Celine (the star), Caro (the fan), and Isabelle (the victim). The parodic elements of Celine's caricature are overtaken by unsettling and jarring scenes of the abuse and neglect of Isabelle that bring a haunting new context to Dion's inspirational tunes.

Throughout, Caro (Delphine Bienvenu), a Walmart employee with an obsession for the singer, is the ring leader. She flits from scene to scene as if she's changing channels, all the while directing her three co-workers (Jean-Robert Bourdage, Trent Pardy and France Roland) with a microphone. With complete dramatic power, she guides the action with new suggestions and changing scenarios. 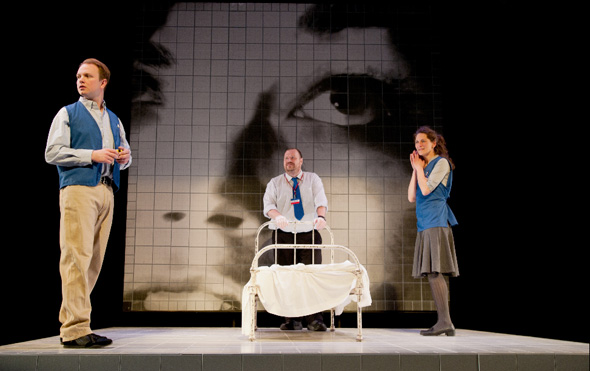 The play visits come pretty grotesque territory, reflective of our modern preoccupation with both the intimate details of a celebrity's personal life and our desire for a brush with stardom. But it's Choinière's weaving of the real-life story of Isabelle Cote into the mix that proves most effective. Cote was abused by her family for over 17 years. Dion's music became something of a way for her to survival through it all.

Steven McCarthy directs at a break-neck speed. His direction emphasizes the fragmented qualities of Choinière's text, but it moves a tad too quickly for the foursome who seem to be a few steps behind the rapid shifts in tone. McCarthy finds the right note for each of the striking crescendos, however (there a few strong builds in the piece).

Bienvenu eerily guides the audience through the messy territory and the description of her skin turning inside out is truly chilling. James Lavoie's set design, clean white tiles and a dingy single bed, set a fitting clinical tone.

Choinière and Churchill have delivered a provocative and complex look at the senselessness of celebrity obsession.

Bliss, written by Olivier Choinière with translation by Caryl Churchill and direction by Steven McCarthy, runs until April 8 at Buddies in Bad Times Theatre.