With an abundance of theatres in the city, you'd think there'd be enough space for performers to hone their craft in rehearsal halls and acting studios. Unfortunately, affordable rehearsal space is hard to come by in the city.

Unless you're a part of a professional production that can afford to rehearse in the same building or are still a student and have access to university and college classrooms, renting studio space is a financial reality, and headache, for most independent theatre companies.

A fairly new option for indie theatre-makers is the Toronto Fringe Festival's Creation Lab which opened this past fall at the Centre for Social Innovation. The Lab is an accessible space for any type of artistically-minded activity with discounted rates through Fringe's Time in Space subsidy program.

A project of the Toronto Fringe Festival, whose mission is to provide access to creative opportunities, the Creation Lab joins the already established Next Stage Festival as ways in which Fringe programming is beginning to run year-round. Already, the Lab has proven attractive to a number of diverse groups seeking space â they've hosted film collectives, corporate meetings, non-profits, yoga classes, and choirs among others. 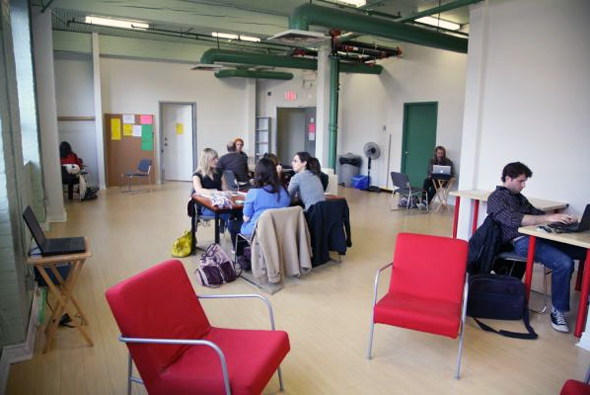 Creation Lab Coordinator Claire Wynveen says the Lab came to be after a series of discussions in 2010 that explored the shortage of suitable rehearsal space: "We identified that by providing access to affordable and clean creation space in the city, not only would more art be created but better art would be created."

In the Lab's first six months with the Time in Space subsidy program, groups and artists have taken advantage of over 2,000 subsidized hours of creative time. With rates as low as $5 per hour for collectives with no access to funding, it's no wonder.

Wynveen hopes the Creation Lab becomes "a resource for not only the indie theatre community, but our local neighbourhood, our community at the Centre for Social Innovation in the Annex, and our larger community of arts organizations and non-profits."

Groups interested in booking the Lab should take a look at the online calendar to see if dates are available (they're currently booking into June). Full instructions on how to book the Lab, as well as the various subsidy levels, can be found on the Toronto Fringe Festival website.