You're bound to be surprised when you see a production from Robert Lepage. Whether it's the visual artistry of the projections and filmic techniques, or the expert weaving of story and metaphor, Lepage has a knack for creating large scale narratives that question expectations.

There are surprises in The Blue Dragon, the newest of his work to arrive in Toronto, but they're not just the dazzle of stage machinery — although there's plenty of innovation on that front. Lepage's play has overtly funny moments, not necessarily a feature of his work, which spring from the layered relationships of the three characters.

But above all, the play feels distinctly mature. This is not to say that Lepage's work has lacked maturity in the past, but the revisiting of Pierre Lamontagne years after his appearance in The Dragons' Trilogy, places the piece in a middle-aged, fall-season sort of mood.

Pierre (Henri ChassÃ©), a Canadian expat hoping to save his art gallery under pressure from Chinese authorities, rekindles a longtime relationship with Claire (Marie Michaud), an old fling who is in China to adopt a child. Pierre's latest lover, Xiao Ling (Tai Wei Foo), rather than stand between them, helps connect the two again.

In one of Lepage's most linear-based narratives, the journeys of the three characters, like the three streams of the river found in the calligraphy symbol referenced at the outset, converge together. The loneliness of being a foreigner is brought into conflict with the beauty of the landscape. This very human exploration sees its way to a playful conclusion. 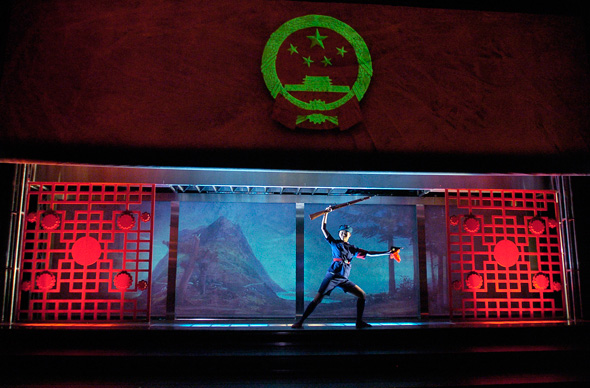 While Pierre is the subject of Lepage and Michaud's tale, the desires of the two women — one a successful advertising professional in her 40s yearning for a child and the other an energetic and emotional artist — feature mostly strongly. Claire's plight specifically, a new visitor seeking salvation in a land not her own, provides an inroad to Lepage's portrait of China.

As with all his work, Lepage utilizes innovative stagecraft in his direction, transitions between scenes and projections that define space, to evoke intimacy when needed and vast distance to emphasize loneliness. Transport is a prominent feature of the design with scenes depicting trains, bikes, boats, and airplanes. The stage pictures are mesmerizing, and they connect with the rich detail of the tattoo and chinese characters stenciled throughout.

The scene between Michaud and Tai Wei Foo in the nightclub with the rotating bar is among the best. There is usually a nightclub scene, with loud music and bright visuals, in a Lepage play, but the mismatch of Xiao Ling's youthful enthusiasm and Claire's more seasoned carelessness makes for a surprising tenderness between the two characters. While played well by ChassÃ©, Pierre blends slightly into the background; his sadness is not quite as compelling as that of the two women.

The Blue Dragon features the hallmarks of a Robert Lepage production with its stunning visuals and thoughtful metaphors. It's the light comedy, linear storyline, and playful ending, not necessarily what you'd expect from the Canadian theatre guru, that make this one worth seeing.

The Blue Dragon, directed by Robert Lepage, runs at the Royal Alexandra Theatre until February 19.