There's a moment in Other People where Petra, an intelligent writer who dances to support herself, articulates the collective yearning that pulses throughout the drama. She identifies this desire as if she'd never considered it before: "People want love." What's more difficult for her to say, but true of each and every character, is that they're all searching for this elusive state of being.

Pedestrian as the subject may seem, Christopher Shinn's play, indeed a play about characters looking to fill a void, features anything but a traditional approach to a conventional topic. Mutual Co-op's production, directed by Aaron Willis, comes close to delivering a picture of this suffering, but is held back by Shinn's structure — it's beautifully written but feels unsure.

In a cafe in NYC, Stephen (Ben Lewis) and his roommate Petra (Tatiana Maslany) anticipate the arrival of Stephen's ex-boyfriend Mark (Indrit Kasapi), who plans to crash on their couch over the holidays. Stephen, still very much in love, must temper his desires in light of Mark's new religious philosophy, which we sense very early is a guise to hide his sordid past.

Each member of the apartment expresses interest in a new partner. Mark befriends a youth of the street, Tan (Brendan McMurtry-Howlett), who reawakens his drug-induced past. Petra, meanwhile, starts dating a professor (Mike McPhaden) she meets at the exotic club where she works. And Stephen, also wanting a piece of the action, returns to a self-absorbed fling. 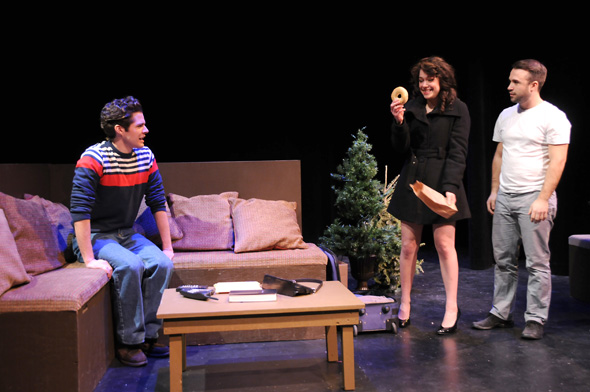 Each of these relationships features a high degree of sexual negotiation — someone chases, while the other one retreats. The most developed of these characters, Stephen, is a neurotic writer whose disposition as a hopeless romantic leaves him lonely. Shinn is speaking through Stephen, so it's no wonder this character is the most rich. His ex-lover Mark is less interesting. While Shinn's ambiguity as it relates to Mark's past is alluring, his religious dogma stonewalls a truer picture of the past relationship. In a play as cynical as this, the religious about-face, with which Kasapi struggles to capture, borders on caricature.

Willis does his best to negotiate the bed hopping. He has obviously spent a lot of time working individual scenes to reach the core of each interaction, and it pays off with some poignant moments. Where it doesn't quite coalesce is in linking each thread together.

The cast does an admirable job of reacting to text that continually shifts. Lewis has a handle on Stephen's neurosis, finding a quiet and endearing charm in the character's landscape. And Maslany offers us something similar — she balances Petra's intellectual self-confident with her romantic vulnerability. In supporting roles, McMurtry-Howlett and McPhaden stand out. In each of their appearances, the actors provide a much needed charge.

Christopher Shinn is one of the hottest American playwrights on the scene. Other People offers a window into his world. While it's chock full of biting dialogue, the narrative dips too far before it can settle on firm ground.

Other People, written by Christopher Shinn and directed by Aaron Willis, runs at the Young Centre for the Performing Arts until January 28.