The two plays selected from Volcano Theatre's The Africa Trilogy for a remount at Canadian Stage, under the title Another Africa, are striking in their difference. Shine Your Eye is set in Nigeria, Peggy Pickit Sees The Face of God in the West. The former is composed of African characters — save for a Torontonian who links in via Skype — while the latter is a dinner party with two white couples. One examines the complexities of finding a sense of place in Africa, while its pairing considers Africa from the perspective of the "Other."

The differences don't end there. Both employ contrasting stylistic elements in the telling of their tales. The first relies heavily on monologues, while the second is an hour in the course of one evening. Difference also makes itself felt in the success of each piece. An intriguing narrative develops in Shine Your Eye, but ultimately the pieces don't come together before the curtain falls. Peggy Pickit is the opposite — it's a hard-hitting drama bursting with emotional dialogue, memorable performances, and the right note of ambiguity.

In Shine Your Eye, Beka, a computer hacker and daughter of an assassinated politico, is a character we're inevitably drawn towards. She's a vibrant, intelligent, and passionate young woman. Dienye Waboso brings out the best in the character, making us believe she holds the hopes and dreams of a new Nigerian generation. Beka's primary means of communication is in lengthy monologues that express her torment at a life in Nigeria versus the promise of one in Canada. The monologues written by playwright Binyavanga Wainaina are beautifully composed, but contain prose so full of ideas that they're often hard to grasp. They also occur so frequently that they interrupt the overall pace of the show.

The setting at the Nigerian scam office introduces us to the reality of Beka's job prospects. Here, a collection of scam artists craft emails to Westerners in the hopes of free money. Lucky Onyekachi Ejim, as the boss, presents striking proclamations, but we learn little about him. The setting serves as less a place for the advancement of story and more as the backdrop to Beka's internal struggle. Three of the young hackers, a group named the Naija Boys, burst into a spontaneous music video that, while fun, seems out of place.

Ross Manson brings strong direction to the piece with the use of multimedia, and the introduction of Beka's avatar-self, but the many parts don't seem to unite before our eyes. While Beka's struggle is a classic one — does she stay or does she go? — other plot elements seem to distract from the core of the play. 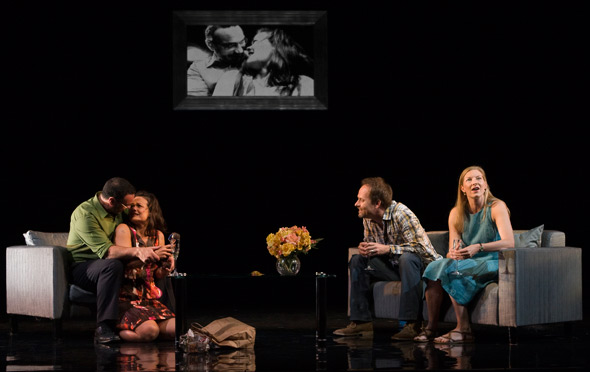 Peggy Pickit Sees The Face of God is seemingly simple: two couples get together for dinner — Martin and Carol (Tom Barnett and Maev Beaty) return after six years in Africa and Frank and Liz (Tony Nappo and Kristen Thomson) have been home all along. But there's more than meets the eye, and thankfully, we're a party to the subtext. Characters step outside the narrative and describe what is to come, and what's really going on with all the passive aggressive pleasantries. With so much under the surface, each discovery adds yet another layer.

Roland Schimmelpfennig, the current master playwright in Germany, creates two couples with flaws aplenty. The difference is that we like them; their shortcomings make them all the more human. The back-and-forth between the actual over-drinks discussion and the inserted subtext is penned brilliantly, and turns an already intriguing discussion into a more complex picture of each individual's personal stake.

Director Liesl Tommy has brought out the most in the dialogue with a quick pace that stops and holds the moments of crisis. The addition of a camera, in the doll brought home by Carol that inevitably becomes a playmate for Peggy Pickit, serves to take exaggerated snapshots of the absurd conversation. As the only item in the room from the continent of which they all discuss, it bears silent witness over the scene.

The clever dialogue is delivered by an incredible cast. Beaty and Thomson, especially, charge each interaction with tension boiling beneath the surface. It's in these moments where the anxieties of each couple burst forth. Nappo is equally buffoonish and Barnett is a strong partner to Beaty.

The evening seems a bit unbalanced in favour of Peggy Pickit, which is a strong comment on the West's relationship with Africa. No dishes are thrown or furniture tumbled, but the destruction comes in a rush of emotion.

Another Africa featuring Shine Your Eye and Peggy Pickit Sees The Face of God, is playing at the Bluma Appel Theatre from September 26 - October 22. Tickets are $22 - $99.